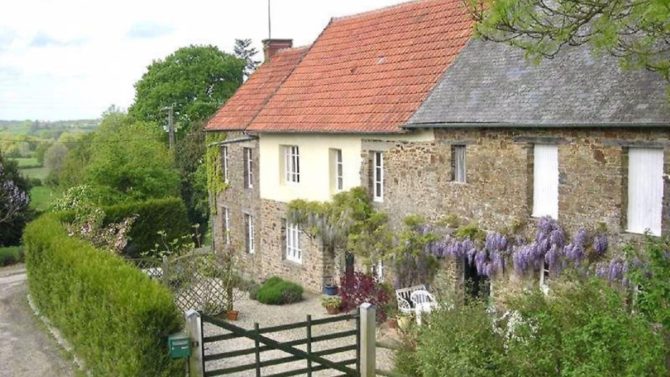 You don’t have to travel far at all from the Channel ferry ports to find your dream French property. These lovely homes are within an hour’s drive of Calais, Dieppe, Le Havre, Caen, Cherbourg, St-Malo or Roscoff.

No, that’s not a semi-detached cottage but a fabulous spacious home with five bedrooms, three bedrooms, two lounges and bags of character. Made from a former farmhouse and adjoining barn that could be split again into two dwellings, the property sits in 1,723m2 of land near the beautiful village of Inxent in the Course valley only half an hour from the beach resort of Le Touquet. Outside, there are barns, terraces, a courtyard for parking and lush lawns. Just 9km away is the historic town of Montreuil-sur-Mer, from where you can travel by train to London and Paris.

Boasting beautiful brickwork and stunning half-timbered internal walls, this stylish Seine-Maritime is in excellent condition. It’s only 6km from a popular golf club and handy not only for the coast but also the Normandy capital Rouen, an attractive cathedral city with Michelin-starred restaurants. There’s a beautiful double lounge, mezzanine office, ground floor master suite and two first floor bedrooms with a second bathroom. The terrace looks south over more than a quarter of an acre of land surrounded by open fields in friendly hamlet.

On the market with Beaux Villages Immobilier

What could be more quintessentially Norman than this smart half-timbered (colombage) house facing south in beautifully landscaped grounds adjoining lush Orne countryside? Recently renovated, it’s a turnkey property comprising a large kitchen, lounge, second lounge (or extra bedroom) and bathroom on the ground floor with three double bedrooms and extra mezzanine space above. There’s also a small wine cellar. Outside you’ll find a garage, woodstore, pond and good-sized paddock grounds with electric gates only five minutes from a village and 6km from a market town.

How playing the currency market can save you money

Charming and nicely renovated, this Orne cottage is at the end of a lane with a forest on its doorstep and views of the countryside and château. Yet it’s just a few kilometres from the pretty riverside town of Ecouché, which has all amenities. With two bedrooms, two bathrooms, a garage, woodstore and 1,487m2 garden, this property could equally be a permanent home or lock-up-and-leave.

With delightful gardens, an orchard and paddock totalling almost two acres, this house in the south of the Cotentin Peninsula in Manche is perfect for those seeking space. It has five double bedrooms, utility and study space and an attached barn with garage/workshop, stabling and a studio above. Close to the riverside village of Pont-Hérbert, the property is just 8km from the big town of St-Lô and 30 minutes from the Normandy Landing beaches as well as being handy for both Cherbourg and Caen ports.

With only deer and hares for company, this detached cottage in Brittany is at the end of a lane near the Côtes-d’Armor village of Sévignac, which has a bar-restaurant and boulangerie. The cottage, which was recently re-roofed, has two bedrooms, one bathroom and an open-plan living space while the pigsty has been converted into a study. There’s parking in front of the house, a terrace and just over an acre of land.

This idyllic pair of stone houses is just six minutes’ drive from the thriving Côtes-d’Armor town of Callac, which has a cross-cultural organisation and lots of amenities including a cinema and doctors. It’s also close to the Armorique regional park and only 40 minutes from the coast. There’s a main house with three bedrooms (one on the ground floor) plus a sweet one-bed cottage ideal for a grandparent or visitors. The property is set in 2,334m2 of land which contains a shed, car port and large barn.