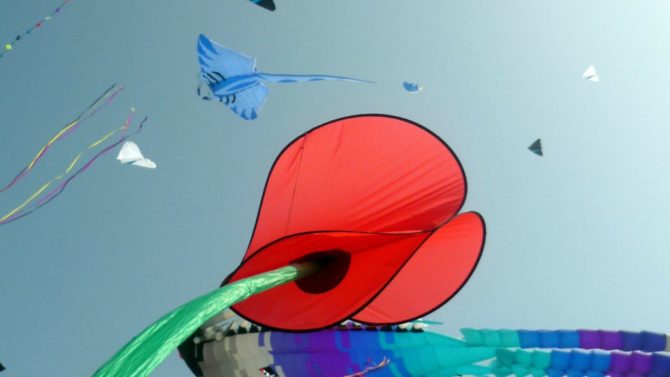 The arrival of autumn means the return of some fantastic events from France’s cultural and sporting calendar. Which are you going to add to your itinerary?

Bargain hunters should add Europe’s largest flea market to their calendar for the ultimate challenge. Easy to reach by Eurostar, it’s also a must-visit for foodies, with moules frites being just one of the divine delicacies on offer. A massive 30 tonnes of fries are apparently eaten over the course of the market, along with 500 tonnes of mussels.

A running race fuelled by steak and wine? Count us in! Over 8,000 runners every year take part in the Marathon du Médoc in Bordeaux, now in its 34th year. With a whopping 23 breaks for wine, it’s no wonder that places for this year’s event sold out in just 20 hours.

The skies above Dieppe will be filled with a rainbow of kites as the famous festival returns for its 38th year. This year’s theme is “Le Monde du Fantastique” and Cambodia will also be in the spotlight during the nine days of celebrations. The Normandy town welcomes half a million visitors each year for the event, which is said to be the biggest kite festival in the world.

For the 30th time, the French capital becomes the place to be for art lovers and collectors as La Biennale Paris takes over the opulent Grand Palais off the Champs-Élysées. A highlight this year will be an exhibition of Napoleon-themed objects – one of the most important collections of its kind in the world.

The Alpine waters of Lake Geneva provide an idyllic backdrop to this important ladies’ golf competition. The event is a member of a super-select club of just five Major tournaments on the women’s world golf tour, and is the only one in continental Europe. Last year Swedish player Anna Nordqvist claimed victory; who will seize the crown this year?

Buckle up for this annual classic car race that sees competitors speeding round the winding roads of the quaint old city of Angoulême. The fun begins on Friday with the Elegance Parade, starring thirty handpicked vintage cars. On Saturday, there’s an International Rally on the roads of Charente with more than 500 crews exploring the region’s charms. The highlight for many people, however, is Sunday, when the city itself hosts the fast and furious races with no fewer than three hairpin bends.

Almost 17,000 monuments in France (and many more across Europe) open their doors for a very special weekend this month. Thousands of museums, monuments and historic buildings, many of which aren’t normally open to the public, welcome visitors for free or reduced rates, giving as many people as possible the chance to develop their knowledge of France’s rich cultural heritage.

Francophiles should take a trip to Limousin in September for this celebration of all things French language, in collaboration with the Organisation Internationale de la Francophonie. It’s the perfect opportunity for French creatives to share their work, whether that be dance, music or literature.

In the market for a new boat? The Grand Pavois is an international boat fair taking place in the Port des Minimes, and one of the biggest events in the boat show calendar. There are plenty of vessels on display, both in and out of the water, as well as sections of the show for other water-based activities such as scuba diving, kayaking and fishing.

Following a successful inaugural event last year, the Jardins Ouverts scheme returns to Île-de-France this year, with nearly 200 enchanting gardens open to the public across the weekend. Some of the more famous gardens taking part are the Potager du Roi at Versailles and the Château de Saint-Jean de Beauregard.