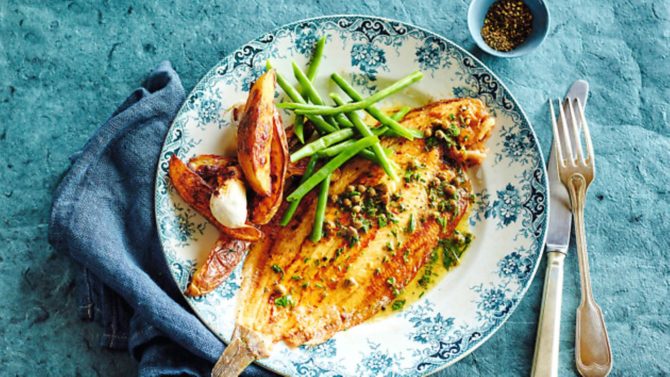 There are many different reasons why people are attracted to, fall in love with, and ultimately move to France. It might be the draw of the sunshine in southern regions or the less populated countryside and roads. Or it may well be French food and wine embedded in our memories from many enjoyable summer holidays: long, lazy lunches with a glass or two of local wine, and a simple dish enjoyed under the shade of a tree or overlooking a harbour dotted with fishing boats.

One such dish is sole meunière; this pan-fried fish served in a golden and nutty butter sauce, is perfectly balanced by a squeeze of lemon juice, lightly salty capers and a swirl of fresh herbs. It was this dish, sole meunière, that the celebrated American food writer Julia Child wrote about in her book, My Life in France, when her husband ordered it in a restaurant in Rouen in northern France. “I closed my eyes and inhaled the rising perfume”, she recounts. “Then I lifted a forkful of fish to my mouth, took a bite, and chewed softly. The flesh of the sole was delicate, with a light but distinct taste of the ocean that blended marvellously with the browned butter. I chewed slowly and swallowed. It was a morsel of perfection.” High praise indeed.

Sole is a flatfish found in the waters of the Eastern Atlantic and Mediterranean Sea. It prefers slightly warmer conditions in shallow waters where it inhabits the sandy or muddy seabed. Within the species, there are several types of sole; Dover, lemon and black sole, but of the three it is the Dover sole – so called because of its association with the seaport where it was commonly landed in the 19th century – that is most prized by chefs for its sweet flesh, versatility and ease of filleting. It remains firm as it cooks, making it easy to flip over in the pan. I like to use Dover sole for those same reasons, but it isn’t essential, as lemon sole works equally well, and in fact plaice also makes a good and possibly cheaper substitute.

Be sure to buy the best ingredients you can: creamy Normandy butter, unwaxed lemons and baby capers preserved in salt, which have a better flavour and texture. Most importantly, though, is the sole itself, so buy the freshest fish you can find – check that it looks wet and glossy and the eyes are clear and sharp, not dull or grey, for the best possible result.

2 tablespoons chopped fresh herbs, such as basil, chives and parsley

For the garlic roasted potatoes:

500g potatoes such as King Edwards

1. Preheat the oven to 200°C/180°C fan, and line a roasting tin with baking paper. Cut the potatoes into wedges and place in the prepared tin with the garlic cloves, oil and a little salt and pepper. Toss well and roast for 35-40 minutes, stirring half way through until the potatoes are evenly browned and the garlic softened. Keep warm.

2. Dust the sole lightly with the flour on both sides. Heat the oil in a large frying pan, add the fish and fry over a medium heat for 2 minutes until golden. Carefully flip the fish over using a fish slice and fry for a further 2 minutes until cooked through. Transfer to a large, warmed platter and set aside. Wipe the frying pan clean and return to the heat.

3. Add the butter to the pan and heat gently until it starts to turn a light golden brown. Add the lemon juice and capers and simmer gently for 1 minute. Stir in the herbs and return the fish to the pan, spooning the juices over the fish and warm through briefly.

4. Serve the sole and sauce with the roasted potatoes and garlic and some freshly steamed French beans.

Previous Article WIN! A copy of Undercover by Danielle Steel
Next Article Where is the best place for me to buy a ski property this season?