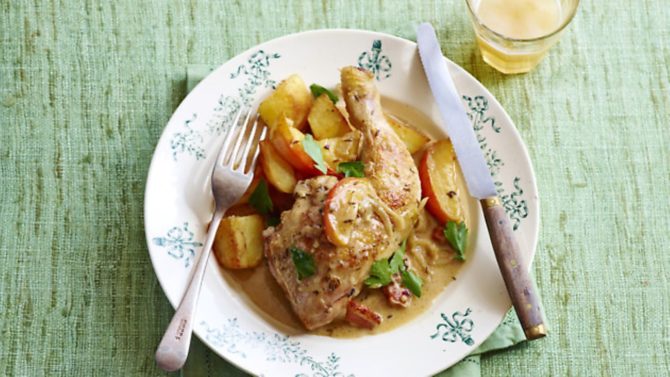 I think that perhaps more than any other part of France, Normandy epitomizes what is truly great about French cooking. Think of French food and one imagines rich, creamy sauces, fabulous-tasting butter, soft unctuous cheeses and superior wines, ciders and brandy. With its rolling hills and fertile pastures, Normandy is famous for producing some of the world’s best dairy produce.

Famous too for its orchards, especially apples, it is renowned for both calvados and apple cider. Vast quantities of apples are grown both in Basse-Normandie as a whole, and Calvados in particular, which is where this famous eponymous apple brandy originates. Cider, rather than wine, is drunk with most meals, and is often used in cooking to create famous dishes such as cotriade (a creamy seafood stew cooked in cider) and of course poulet Vallée d’Auge.

The Auge Valley is situated right in the heart of Normandy and straddles two departments – Orne and Calvados – with the coast to the west and the River Toques to the east. It is here that France’s first appellation d’origine controllée (AOC) for a cider was granted in 1996. Calvados, however, achieved this accolade back in 1942. Both Normandy cider and calvados are considered a better accompaniment to the region’s dishes, as they cut through the richness of the creamy sauces; and calvados, known as le trou normand(‘the Norman hole’) is often drunk between courses, paired on occasion with an apple or pear sorbet.

Chicken is one of several dishes to be cooked with a sauce Vallée d’Auge, which is made with butter, cream, cider, calvados and apples, and it contains all that is glorious from the region. Although I had eaten poulet Vallée d’Auge in a London restaurant, I hadn’t really appreciated its true flavour until a trip to Normandy in the early 1990s; having recently acquired a Citroën DS, my husband was intent on returning the car to its homeland, and while there we stopped to enjoy the dish at a bistro in a medieval village. I can’t be certain if it really did taste better because the recipe, ingredients and cooking were superior, or if it was just being caught up in the romance of France; driving a classic car through stunning countryside. I do know, however, that from that time onwards, a little of my heart was lost to the joys of mouthwatering French provincial cooking.

Revisiting this lovely dish has been a pleasure, and I hope that I can pass on a little of the nostalgia that I enjoyed in tweaking the recipe so it was just right for today.

2. Add half the remaining butter to the pan and gently fry the onion, garlic, thyme and some salt and pepper for 10 minutes until the onion is soft and golden. Return the chicken and lardons to the pan, add the calvados and simmer gently until the alcohol has burnt off. Stir in the cider, bring to the boil, cover and simmer gently for 45-50 minutes until the chicken is beautifully tender. Stir in the crème fraîche and heat through for five minutes.

3. Meanwhile, melt the remaining butter in a frying pan and fry the apple slices over a medium heat for five minutes until golden. Stir them into the casserole, season to taste and stir in the chopped parsley. Serve with sautéed potatoes.

Finish off the meal with our recipe for crêpes Suzette

Previous Article A guide to eating out in Alsace
Next Article Property pick: contemporary house in Charente