READER OFFER! Other Cats to Whip: The Book of French Idioms 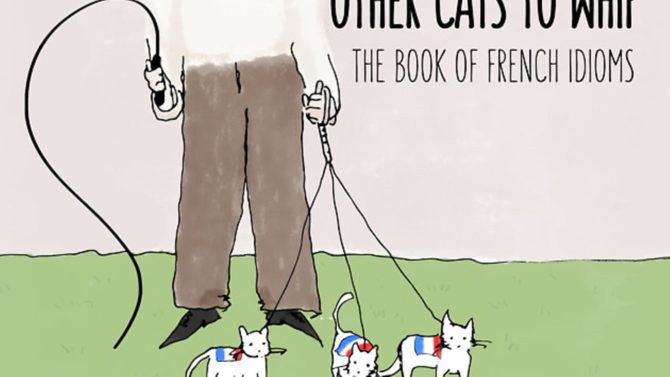 Save £1 on the cover price of Other Cats to Whip

SAVE £1 ON THE COVER PRICE USING THE DISCOUNT CODE ‘ARCHANT’ – ORDER AT WWW.THEBOOKOFFRENCHIDIOMS.COMOther Cats to Whip: The Book of French Idioms

As anyone who has learned a foreign language will know, there are lots of challenges along the way, from memorising new vocabulary to understanding the trickier tenses. The sense of achievement when you get there is well worth the effort though, and when you get to the point where you can drop idioms confidently and correctly into conversation, you know you really have mastered it.

Unfortunately, simply translating a French idiom directly into English is likely to result in some very confused faces, although if the conversation isn’t exactly flowing it’ll definitely give everyone something to talk (or laugh) about.

It’s very easy to end up lost in translation. French idioms often bear little, or indeed no resemblance to their English counterparts, and it can be a minefield trying to work out what they mean. Would you make the connection between a monk’s clothes and a book’s cover, for example? Or between whipping cats and frying fish?

The latter, in case you were wondering, is where the title of this book comes from. Having other cats to whip (avoir d’autres chats à fouetter) is the French equivalent of ‘to have other fish to fry’. Other cats to whip: The book of French idioms includes a selection of interesting and entertaining idioms, with an example of how to use them in a sentence and a translation of the key words, such as verbs and nouns with their genders. The illustrations should help to make the idioms and their meanings more memorable too.

You wouldn’t want to be taken for a pigeon though. And even if you do get lost along the way, it’s not the end of the green beans.

Previous Article Town, city, coast and country: 4 Hérault lifestyles explored
Next Article French vineyards: 10 tips to make the most of your visit