Incredible pictures of the football World Cup celebrations in France 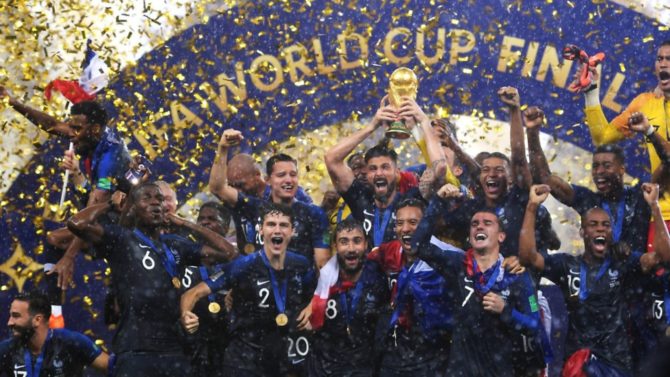 It’s fair to say a collective roar of triumph will have sounded across France when captain Hugo Lloris raised the gold cup above his and his teammates’ heads after winning the World Cup final. The French football team beat Croatia 4-2 after a thrilling game held in Moscow on 15 July 2018, 20 years after Les Bleus became World Champions for the first time.

Back in France, fans erupted into celebrations that lasted well into the night and the next day all over the country. Around 90,000 people were in the official fan zone at the foot of the Eiffel Tower and an estimated one million people then converged onto the Champs-Elysées to celebrate France’s victory together. While some celebrations turned violent in the night, France’s victory undeniably brought the whole nation together.

Here are some of our favourite pictures of the celebrations

This now iconic image of President Emmanuel Macron breaking protocol in Moscow and punching the air in triumph says it all.

The main celebrations were held in the French capital with fans taking to the streets, and particularly the Champs-Elysées.

Portraits of the players were projected onto the Arc de Triomphe, along with their home town in France.

In Marseille, fans gathered in the Vieux Port and under the famous mirrored Ombrière designed by Norman Foster.

In Lyon, buildings, including the impressive Fourvière basilica, turned blue, white and red in honour of the French tricolore flag.

Bordeaux fans were also ecstatic and this beautiful photo captures the feverish atmosphere.

Up in Nantes, people came together on the central Place Royale to celebrate.

While in Rennes, fans cooled off in the sweltering weather in the town’s fountains.

Even in smaller towns, such as Sarlat-la-Canéda in Dordogne, people celebrated in the streets with flags.

And it’s not just in France! The large French community in London gathered on Piccadily Circus to sing and party in honour of the French team.

Les Bleus finally came home to France on 16 July and paraded on the Champs-Elysées in an open-top electric bus as a huge crowd cheered and thanked them. They were then greeted by the President during a ceremony at the Elysée palace and will be given the Legion d’Honneur medal.