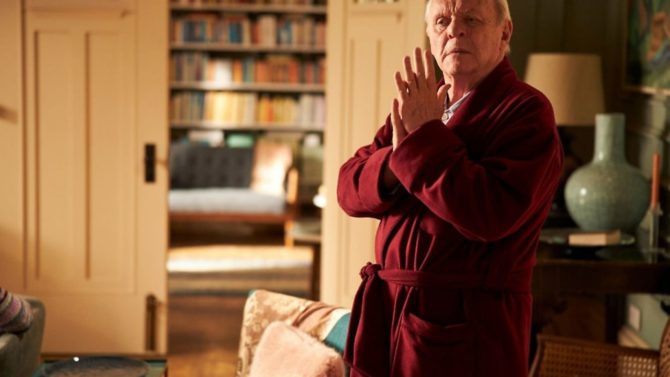 French playwright-turned-director Florian Zeller could not ask for a better cast for his debut film than the one assembled for The Father. Oscar winners Anthony Hopkins and Olivia Colman are extraordinary in the big-screen adaptation of Zeller’s celebrated play – a devastating look at the ravages of dementia.

In his West London flat, 80-year-old Anthony (Hopkins) is losing his grip on reality. His increasingly frustrated daughter Anne (Colman), who has plans to move to Paris soon, is considering putting him in a home after her father shuns every carer she hires, including the bubbly Laura (Imogen Poots). Anne’s husband Paul (Rufus Sewell) is also getting fed up with Anthony’s erratic behaviour and is becoming openly antagonistic. Or is he? With Zeller telling the story through Anthony’s eyes things are confusing throughout. The octogenarian’s struggle to remember faces and names is reflected in different actors playing the same character, while subtle interior design changes and dialogue being repeated adds to the general sense of bewilderment.

Running the gamut from elation to utter despair, Hopkins saves perhaps his greatest performance (and there is already plenty of Oscar buzz) for his early eighties. Colman is less flashy but equally affective as the conflicted Anne while the rest of the British cast keeps the acting quality sky high.

And then there’s the man behind the camera. Transferring a hit play to the big screen is tricky but Zeller makes it look easy, delivering an insightful and poignant drama that reveals the true horrors of dementia.

The Father has been nominated for six Oscars, including Best Picture, Best Actor for Anthony Hopkins and Best Supporting Actor for Olivia Colman. Find out how it fares at the ceremony on 26 April.