May 2017 issue of FRANCE Magazine out now 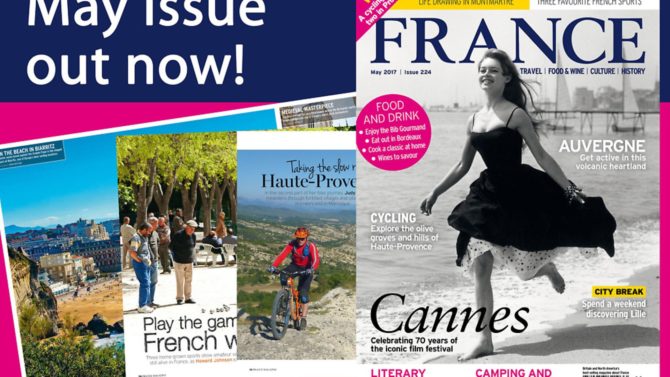 In the May 2017 issue of FRANCE Magazine, we get active in the Auvergne, celebrate 70 years of the iconic Cannes film festival and uncover the cultural side to Lille on a weekend tour

Staff writer on French Property News, Sophie Gardner-Roberts heads to the lesser-known region of Auvergne for an action-packed break. Her trip sees her zip wiring across the Ance Valley, climbing up vertical walls on the via ferrata, exploring the region’s ancient forests by e-bike and trudging up to mountain passes. Her active break in France’s heartland also saw her taste some of Auvergne’s hearty gastronomy, with highlights including the tasty cheese, potato and lard dish known as truffade.

Roll out the red carpet

David Atkinson travels to Cannes ahead of the 70th anniversary of the iconic film festival to suss out the town’s movie magic. David’s visit is an enlightening one; he learns how the festival generates €80 million for the town and that almost 50,000 people descend on the Riviera resort for the last two weeks of May. While the movie screenings are closed to members of the public, David discovers that there are walking tours putting the town’s cinematic heritage into context as well as a set of movie-themed murals dotted on a low-key trail all around the town. In short, the movies are all around you in Cannes.

Where to stay for a perfect pitch

This month we bring you the best camping and caravanning sites in France. Whether you want a standard pitch just a stone’s throw from the coast, or a high-end camping resort in the glitzy south of France, we show you the best places to stay to make the most of the great outdoors.

A weekend in Lille

FRANCE Magazine staff writer Peter Stewart travels to the northern city of Lille to discover its many cultural attractions. He decides to experience the city like a real Lillois and takes a tour by bicycle; the route introduces him to Flemish architecture, across elegant squares, under triumphal arches and past cosy estaminets serving local specialities including carbonnade de boeuf (beef and onion stew made from beer). The trip culminates in a visit to the impressive Palais des Beaux-Arts, home to the largest collection of 19th-century art in France after the Musée du Louvre.

Plus, we learn why the French are crazy about sushi, take a stroll around the quintessentially Dordogne town of Sarlat and suss out the best places to eat in Bordeaux.

Plus, we tour the Basque coast by campervan, take a tour of French cinema history and suss out the best places to eat in Poitiers

Or take advantage of our great subscription offers!