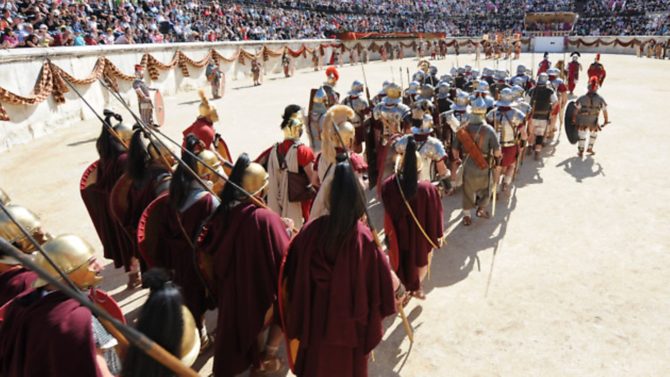 Discover some of the major events happening in France in May 2015, including the country’s ‘night at the museum’ event, Cannes film festival, several music festivals and the creation of an eight-metre strawberry tart!

Visit almost any town in France and you will find some sort of memorial to national heroine Joan of Arc, but Orléans goes a step further with the Fêtes de Jeanne d’Arc festival to celebrate their liberator. Riding at the head of her army, Joan of Arc liberated the city from an English siege in 1429, although a year later she was captured and burnt at the stake. From 29 April until 10 May Orléans plays host to a medieval market complete with jugglers and musicians, along with falconry displays and battle re-enactments. There is also a light show and firework display.

Visit the town of Nîmes in Languedoc-Roussillon on 2-3 May and you could be forgiven for thinking you had stepped back in time to the Roman era. Les Grands Jeux Romains is a spectacular historical re-enactment centred on the Roman amphitheatre which hosts a Roman games including cavalry drills, gladiator fights and chariot races. There are also parades and performances throughout the town, with other Roman sights to visit including the Maison Carré temple in the town, and the nearby Pont du Gard aqueduct. Tickets start from €10 for adults.

As the perfume capital of France since the 16th century, Grasse on the Côte d’Azur celebrates the base ingredient of many of its perfumes – the rose flower – from 8-11 May at the Expo Rose. Rose-growers from around the world gather to display their flowers and compete to win prizes for their blooms. the festival takes place around the city but especially on the Cours Honoré Cresp, in the Villa-Musée Fragonard, Grasse cathedral and the Palais des Congrès.

Jazz is the music of choice in Coutances in Normandy as the Jazz sous les Pommiers (‘Jazz under the apple trees’) festival takes place from 8-16 May. There are performances from an eclectic mix of musicians across seven stages and more informal street performances.

Love a juicy strawberry? Every year the village of Beaulieu-sur-Dordogne in Corrèze celebrates its speciality fruit with the Fête de la Fraise. This year the event takes place on 10 May, with stalls selling strawberries lining the streets, as well as the much-loved highlight – a giant tarte aux fraises, some eight metres in diameter and made using 800kg of strawberries, which is sliced up and handed out to visitors.

From 13-17 May electronic and indie music takes over the streets of Lyon during the Nuits Sonores. There are performances across the city from international and local artists, along with conceptual projects and the Mini Sonores festival to get young children involved in the music scene.

Hollywood glamour arrives in the French Riviera from 13-24 May as film stars descend on Cannes for the International Film Festival. A-listers and up-and-coming names will be promoting their new films and competing for the prestigious Palme d’Or award for best film. The award is decided by the Cannes Film Jury, this year led by the famous directing duo, the Coen brothers, themselves previous winners of the Palme d’Or. For those whose VIP invitations seem to have got lost in the post, there will be screenings of the festival films on the Plage Macé as part of the Cinéma de la Plage event.

If you have decided that 2015 is the year you finally buy your dream home in France, then make sure you visit the French Property Exhibition at Wetherby Racecourse and Conference Centre in Yorkshire on 15-16 May. Organised by Living France’s publishers Archant, the exhibition showcases thousands of properties from across France along with seminars from experts in tax, law and property. Entry is free; just register on the door or on the website.

Visitors are invited to discover France’s museums after dark during the Nuit des Musées event on 16 May, when museums, galleries and cultural institutions across the country keep their doors open during the night – many put on special shows and exhibitions as well as offering free entry. Museums taking part include the MuCEM (Musée des Civilisations de l’Europe et de la Méditerranée) in Marseille, which hosts exhibitions on Mediterranean cultures, and the impressive Palace and Gardens of Versailles, just outside Paris (pictured above). Check with local tourist boards or individual institutions for local events.

Although not part of France, the adjoining principality of Monaco on the Côte d’Azur is worth a visit for the spectacle of the Monaco Grand Prix. Taking place from 21-24 May (with the race on 24 May), the Monaco Grand Prix is the sixth race in the Formula 1 calendar and one of the most challenging, as the circuit winds around the narrow streets of the capital Monte Carlo.

If world music is more your thing, then head over to Angoulême in Charente from 22-24 May for the Musiques Métisses festival. Located in a park on the banks of the Charente River, the festival has performances and food from around the world, as well as creative workshops for children.

www.musiques-metisses.comVisiting in April? Here’s our guide to some of the key events in France in April 2015