L’Hermione: a replica of the 18th-century French frigate 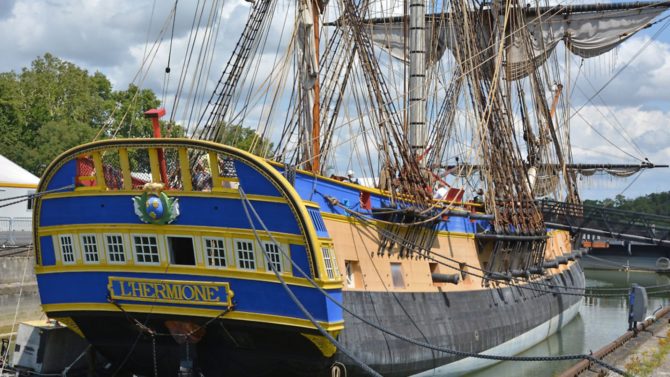 The frigate L’Hermione, a replica of the ship that sailed across the Atlantic to help America win the War of Independence, has set sail again for a tour along the French coast

L’Hermione is a 47-metre-high, 65-metre-long replica of the three-masted frigate that left French waters in 1780, taking the young Marquis de Lafayette to America where he would help George Washington to defeat the British in the War of Independence. Lafayette first ventured to America in 1777 in secret to meet Washington and pledge his assistance, but it was not until 1779 that French intervention in the war was formally approved by Louis XVI. The Hermione was assigned to take Lafayette to Boston and departed from the Île d’Aix on 21 March, 1780.

L’Hermione has set sail again this time on a 120-day-long tour around the French and Iberian coastline. She set sail from Rochefort on 30 January 2018, stopping in La Rochelle from 1-20 February from where she will sail around the Iberian coast to Tangiers, Morocco (9-13 March) and then back up to Barcelona (22-24 March). From there L’Hermione will return to France stopping in Sète for the Escale à Sète des Traditions Maritimes (27 March-2 April), then Toulon (5-9 April), Marseille (12-16 April), Port-Vendres (20-22 April), Nice (25 April) and Bastia in Corsica (27-29 April). She will then sail to Portugal and Spain in May before stopping in Bordeaux (10-13 June) and returning to Rochefort on 16 June. You can book tickets to visit the frigate online.

Why build a replica?

The idea of building the replica was conceived in 1993 at a meeting attended by French author Erik Orsenna and Benedict Donnelly, founder of the Association Hermione-Lafayette in France, and a few others belonging to the Centre International de la Mer in Rochefort. They agreed unanimously that Lafayette’s pivotal role in procuring French money, men and arms to assist Washington was an important part of both the US and France’s collective memory, one which had been largely forgotten in recent times.

How did they build the replica?

Construction began in 1997 and took 17 years, compared with just under a year for the original. The Hermione was built just up river from Île d’Aix at the port of Rochefort. Traditional shipbuilding methods were used wherever possible, with carpenters, blacksmiths, riggers and sail makers rallying to make the ship what she is today. About 2,000 French oak trees were sourced to create 400,000 hand-sculpted pieces for the hull while 24 kilometres of ropes, many of which were prepared at the nearby Corderie Royale rope-making museum, went in to the rigging. However, even a historical project cannot avoid modern rules and regulations. The Hermione had to make several concessions in order to comply with international maritime safety regulations, which included having two motors, modern GPS navigational equipment and adequate sanitary living conditions for her crew.

What was the maiden voyage of L’Hermione?

The Hermione began her maiden voyage on 18 April 2015 and – after stops in the Canary Islands and the Caribbean – made landfall on 5 June 2015 in Yorktown, Virginia. It was here during the War of Independence that the original Hermione took part in the naval blockade in 1781 which led to the surrender of the British General Lord Cornwallis and his troops.

On 8 June 2015, the frigate journeyed north to Mount Vernon, George Washington’s plantation home. After stops in Annapolis and Baltimore the ship called into Philadelphia, where she joined a tall ships festival. Historical re-enactments took place and there was a re-creation of the meal that Washington, Lafayette and delegates of the Continental Congress enjoyed on board the Hermione in 1781.

But the crowning came when the replica arrived in New York – capital of the United States from 1785 to 1790 – for American Independence Day, 4 July. The replica was met with jubilation, and a flotilla of around 140 ships joined her at the Statue of Liberty for a welcome parade. Following a sensational 4 July fireworks display the Hermione left port the next morning bound for Boston in Massachusetts, the arrival point for Lafayette on 28 April 1780, where more historical re-enactments were held.

The east coast tour ended in Canadian waters, in the port town of Lunenburg in Nova Scotia on 18 July. Here the ship enjoyed a short pause before returning across the Atlantic.

8 World War I museums to visit