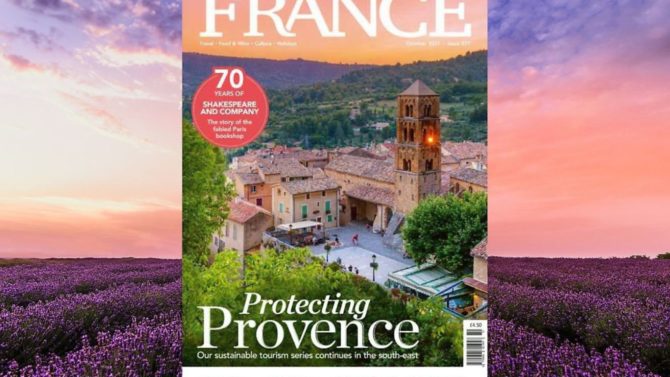 Take a peek inside the latest issue of the magazine, a must-read for Francophiles

As the Dordogne Valley gets the Hollywood treatment with the release of Ridley Scott’s The Last Duel, we take a closer look at the real-life events that inspired the star-studded film. Staying in the acting world, we explore legendary thespian Dirk Bogarde’s lifelong love of France. Did you know he escaped the limelight at his idyllic Provence home, Le Haut Clermont?

In our foodie pages we find out what it’s like to attend a cooking course with an award-winning chef in one of Provence’s most iconic kitchens. Creamed potato millefeuilles, anyone? And any chocoholics out there, you won’t want to miss this month’s recipe – moelleux au chocolat.

What else you can expect…

“Les Sables-d’Olonne has something of a mythical status in the sailing world. Every four years, the astonishingly courageous participants of the Vendée Globe cast off from here to begin a non-stop, single-handed circumnavigation of the planet. At least 70 days – and 45,000 kilometres – later, the first of the cutting-edge vessels arrive back home. Every arrival, from the winner to the last boat home, is cause for celebration.

Between races, Les Sables-d’Olonne has a different feel, but whatever the season, this lively coastal town is all about the sea. Our wander around the resort begins by the clocktower, at the southern end of the promenade. Looking out to the ocean, from here you can see a flattened, ridged expanse of dark rocks emerging from the sand and reaching out towards the waves. But the view that really holds your gaze is the arc of the golden sands on the great sweeping bay around which this town is built.”

Read more of Sandra Haurant’s trip to the Vendée resort in the October 2021 issue of FRANCE Magazine.

“There are bookshops so packed with history, eccentricity and cultural clout they become a story themselves and the subject of literature. They have the kind of aura that extends beyond bookshelves and rises above commerce, offering writers and readers a refuge from the storms outside, a place where you feel a potential literary superstar just to hang out there.

City Lights in San Francisco (est. 1953), Strand bookstore in New York (est. 1927) and Foyles in London (est. 1903) fall into this category, but the stand-out trailblazer of them all has to be Shakespeare and Company in Paris, ‘a novel in three words’, as the founder of its current manifestation, George Whitman, once described it.”

Read more of Deborah Nash’s adventures in book heaven in the October 2021 issue of FRANCE Magazine.

Discover the life and work of Georges Brassens

“Located on a peninsula between the sea and the sprawling Étang de Thau, the Mediterranean port of Sète has long been synonymous with its most famous son. Brassens described his hometown as “surrounded by water and with sunshine everywhere” and recalled that he had practically “lived in the water” as a child. But his was also a childhood spent immersed in music.

Born on 22 October 1921 to an Italian mother and French father, Brassens grew up in a working-class neighbourhood on the Rue de l’Hospice (now Rue Georges Brassens) at the foot of Mont St-Clair. Both of his parents loved to sing and according to Brassens, there was never a day without music or song in the house. Unfortunately, young Georges was less inspired by academics and struggled at school, but found a crucial mentor in his literature teacher, who introduced him to poetry and encouraged Brassens to write his own poems.”

Read more of Alison Weeks’ profile of the moustachioed troubadour in in the October 2021 issue of FRANCE Magazine.

Like what you see? The October 2021 issue of FRANCE Magazine is on sale from 25 August. Take advantage of our great subscription offers and get FRANCE Magazine delivered straight to your door every month! You can also buy single issues from Mags Direct.