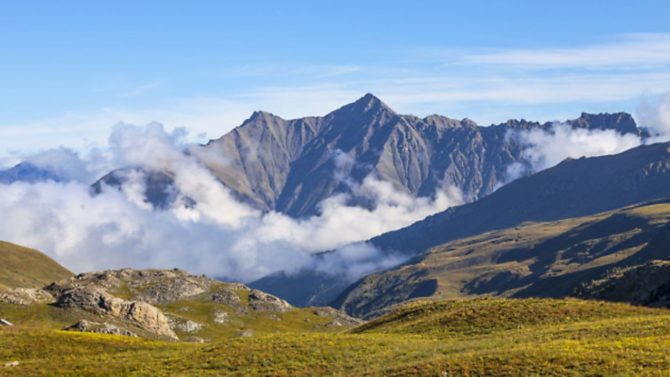 Need some off-the-beaten-track travel inspiration for France? Take a look at these hidden corners of France you might not know about

Located at the most southern tip of the alpine arch, this mountain range is also one of France’s 10 national parks. Starting from Barcelonette, it stretches all the way down to almost touch Menton and its highest peak summits at 3143m. As a national park, it is very protected and only has about 17,700 permanent inhabitants (across the whole 146 500 hectares!) but it boasts the most diverse flora in the country with 2000 plant species including 200 rare varieties. With the influence of the Alps to the north and the Mediterranean to the south, the stunning succession of gorges, passes, lakes and summits are a wonder to explore. You’ll come across an astonishingly wide range of landscapes, from Provencal charm to alpine ruggedness, making the Mercantour one of the most beautiful and underrated mountain ranges in France.

Île Molène is the biggest of the Ponant islands, which lie off the most western tip of Brittany and are located within France’s first natural marine park, the Iroise park. The long ferry trip (90 min from Brest via Le Conquet or 30min from Le Conquet) and the €35 return fare in high season mean that only the very determined are likely to be motivated to explore the island. Ringed by white, sandy beaches, the green, low-lying island looks like a tropical atoll when the sun shines. It’s a popular spot for scavenging mussels, razor clams and sea snails at low tide (pêche à pied), a fun activity for families. You can go on boat tours that take you round the island and the other smaller ones nearby, or you can hire a kayak for a more active trip.

One of France’s Plus Beau Village, Estaing, in Aveyron, is dominated by a beautiful 13th-century chateau, owned by the Estaing family (French President Valéry Giscard d’Estaing bought it in 2005). Classed as a historical monument in 1945, the castle was built around a pentagonal dungeon. Despite its very small size, there is a lot to visit in Estaing and its charm comes from the many historical dwellings scattered around the village. Another of its main attractions is the gothic bridge straddling the River Lot which pilgrims walking the Saint Jacques de Compostelle route cross each year. The pretty Church of Saint-Fleuret also reminds visitors of the village’s location on the UNESCO World Heritage pilgrimage route. Estaing is also home to the smallest vineyard in France!

With the vines almost dipping their toes in the sea in the Baie de Paulilles, this little vineyard belongs to the famous Domaine Cazes, based further up the road in Rivesaltes. Located between Port-Vendres and Banyuls, in Pyrénées-Orientales, the estate boasts 65 hectares of planted vines and produces the famed Banyuls natural sweet wines, as well as reds and a small amount of whites. Set in such a stunning setting, among the vines and by the beach, is the Clos de Paulilles restaurant that serves simple, delicious and beautifully presented local dishes, focusing on Mediterranean cuisine mixed with a little catalan heritage. A two bedroom gîte is also available to rent for a peaceful stay among the vines…

This lesser-known castle was designed by Louis XIV’s financial superintendent, Nicolas Fouquet. Architect Louis Le Vau, painter Charles Le Brun and landscape gardener André Le Notre came together to execute the works on the then-modest estate. It’s had a turbulent life. After Fouquet was arrested and imprisoned for life, his wife tried to save it but had to sell in it 1705. Alfred Sommier, an art amateur, purchased the estate in 1875 and began immense renovation works to restore the castle and the gardens à la française to their former glory. His direct descendants are the current owners of the chateau. Located close to Melun in Seine-et-Marne, the castle is very easy to get to from Paris. Vaux-le-Vicomte is home to various events and exhibitions but the best way to discover it is to attend the candle-lit evenings where the whole estate is lit up with thousands of candles every Saturday evening from 7 May to 1 October.

This is one of the oldest regional parks of France and it is located across Burgundy’s four départements, covering 281 400 hectares. The Morvan is a largely rural territory with a variety of different landscapes ranging from rolling hills of unspoilt countryside, to vast lakes with sandy beaches. It is ideal if you’re looking for an active holiday in the great outdoors. The Grande Traversée du Morvan is a 330km-long cycle path that stretches from Avallon to Autun but there are plenty of hiking options, including former pilgrimage routes. The many lakes and rivers scattered in the Morvan offer plenty of water activities, while tree-walking is very popular in the region’s dense green forests.

Île de Groix is a 45-minute ferry trip from the southern Brittany port of Lorient to port Tudy and is a nearly completely flat island. South-east of Port Tudy lies an almost tropical beach of silver sand and turquoise waters. This beach is called the Grands Sables and it is rare in Europe because it juts out into the ocean like a peninsula instead of curving gently like a bay. It’s also an astonishing beach because it changes and moves every year depending on the tides. If you’re up for a walk, from Port Tudy, it is a 45-minute stroll to the beach but you can also hire a bike or hop onto a bus for a 13-minute journey from the village.

The city of Clermont-Ferrand serves as a gateway to the Massif Central and the dormant volcanoes that make up the Auvergne’s Chaîne des Puys. It is actually overlooked by the famed Puy de Dôme but the volcanic heritage is visible in the city’s architecture, including the spectacular Gothic cathedral that juts out of the skyline with its dark stone. The city is packed with cultural and historical heritage including the nearby presence of Gergovia, the battlefield where Vercingetorix defeated Caesar’s troups, Vulcania, a volcano-themed park and museum, and the pretty Medieval district of Montferrand, which used to be a separate town altogether. As a major university city, Clermont-Ferrand is vibrant and dynamic, with plenty of events going on all year rounds and an excellent selection of bars and restaurants.