Have Britain and the EU agreed on citizen rights after Brexit? 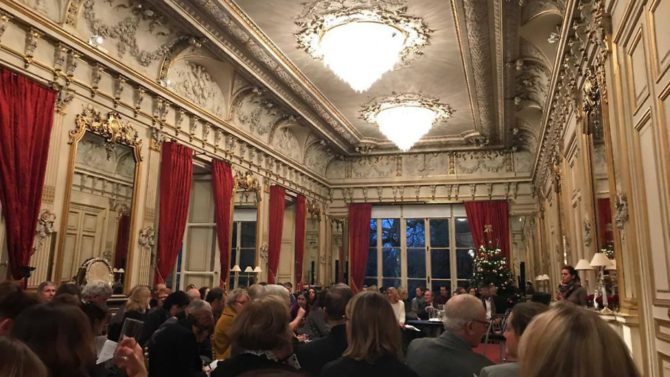 In a meeting with British citizens in Paris, UK Ambassador Ed Llewellyn was quizzed on the Brexit negotiations, citizen rights, pensions and voting rights – this is what he had to say

Useful discussion @UKinFrance in Paris this afternoon with British expats on citizens' rights in our series of outreach meetings across France pic.twitter.com/CPbbTfme0M

The British Embassy in Paris has been travelling around France holding a number of Q&A sessions with British citizens living in France to try and answer their concerns surrounding Brexit.

The latest meeting was at the British Embassy in Paris and chaired by the UK Ambassador Ed Llewellyn. He faced some tough questions from the British citizens at the meeting on the topics of citizen rights, pensions and voting rights. While there were some optimistic points for UK citizens living in France he was careful to qualify everything with “nothing is agreed until everything is agreed”.

The ambassador began on a positive note saying that the UK government has made progress in the first round of talks on issues such as citizens’ rights, Northern Ireland and the divorce bill. It hopes to move onto the second phase, namely the UK’s relationship with the EU, next week.

According to the UK ambassador the British government has stated that EU citizens who have been living in the UK for five years can benefit from ‘settled status’, meaning they would enjoy the same rights as British citizens. Any EU citizens who have been living in the UK for less than five years will be able to stay in the UK and also be granted ‘settled status’ once they reach five years residency. Mr Llewellyn said that the EU has agreed in principle to grant reciprocal rights to British citizens living in the EU. However, he also repeated that “nothing is agreed until everything is agreed” and when pressed explained that there is nothing to say that these rights won’t be bartered at a later date in favour of, for example, trade.

The UK ambassador also said that British citizens who live in an EU country after Brexit will have the right to leave one country, go to another and return to that original country without losing any of their rights. For example, if you live in France for five years, then take a job in Germany for two years and return to France afterwards you will see no change in rights.

What effect could Brexit have on British expats in France?

Many British citizens who have lived outside the UK for more than 15 years were angry that they were unable to vote in the EU referendum, especially as Brexit could have a considerable effect on their lives. Theresa May has said that she is in favour of abolishing the 15 year voting rule for British citizens living abroad but this has not been legislated for yet.

Pensions of British citizens living in the EU after Brexit

There was welcome news for British retirees living in the EU as the UK ambassador confirmed that their UK pensions will continue to be uprated after Britain leaves the EU. He explained that this is governed by UK legislation not the EU and the government intend to continue the policy after Brexit.

Some British citizens living in France have reported problems obtaining a carte de séjour, the French residence permit. They have been told by their local préfectures that as an EU citizen they don’t need one and should wait and apply after Brexit but the UK ambassador said this is incorrect and if anyone experiences problems getting a carte de séjour they should contact the British embassy using the email address [email protected].

‘In leaving the EU, Britain is not leaving Europe’

On a positive note for Brits living in France, the ambassador believes that the French government will work to ensure that British citizens in France can enjoy as normal a life as possible after Brexit. After several meetings with French government officials in recent weeks, he said that there is strong recognition of the enormous contribution that British citizens have made here in France. Mr Llewellyn said that the UK has longstanding ties with France that it won’t sever and his task as UK ambassador to France is to keep Franco-British relations as strong as possible.

There is one more meeting chaired by the British Embassy in Poitou-Charentes on 11 December and they said they will be continuing to speak to British citizens in France in the new year. More details on their Facebook page and on the website www.gov.uk/world/france

How do non-EU residents buy a property in France?

Previous Article Tips for a great family cycling holiday
Next Article This is what you can buy in Dordogne for €150,000 or less