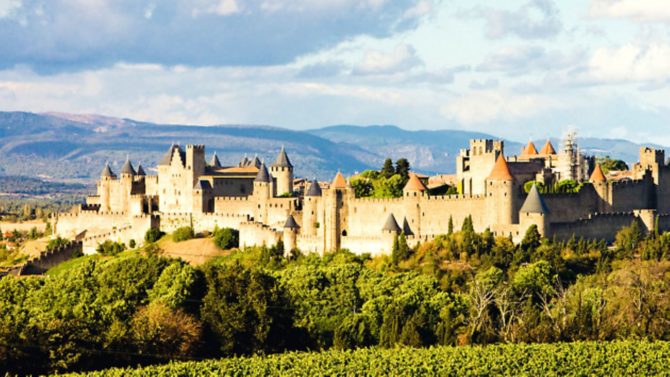 Shortly after its foundation in the 9th century, the Benedictine abbey of Vézelay acquired the relics of St Mary Magdalene and has since been an important place of pilgrimage. Today, the 12th century monastic basilica sits at the top of Vézelay’s hill, surveying the beautiful surrounding countryside of Yonne.

Prehistoric Sites and Decorated Caves of the Vézère Valley (1979)

The Vézère valley contains 147 prehistoric sites dating from the Palaeolithic and 25 decorated caves, including the world famous Lascaux caves discovered in 1940. The discovery of such paintings had an unprecedented impact on ethnological and anthropological studies and are still studied today.

Home to France’s kings from Louis XIV to Louis XVI, the Palace of Versailles, also known as the Chateau de Versailles was embellished by several generations of architects. One of the most famous galleries is the mesmerising Hall of Mirrors. The impressive gardens, designed by André Lenôtre, are decorated with ornate fountains.

Perched on a rocky islet and exposed to powerful tides between Normandy and Brittany, Mont St Michel is an outstanding architectural accomplishment, accessible only once the tide is low and offers dramatic vistas. The Benedictine abbey, dedicated to the archangel St Michael, towers over the small village below it.

The construction of this cathedral began in 1145 but the site suffered a terrible fire in 1194 after which it took 26 years to rebuild. With its vast nave, detailed sculptures adorning the porches and the magnificent 12th to 13th century stained glass, Chartres Notre-Dame Cathedral is a masterpiece of gothic architecture in France.

Amiens Cathedral is one of the largest 13th century gothic cathedrals in the country, with the nave reaching the height of 42.30 meters inside. Towering over the river Somme in Picardie’s capital, the impressive façade is particularly remarkable thanks to the ornate sculptures adorning the main west façade.

The city or Arles boasts impressive Roman monuments that are beautifully preserved. The arena, still in use today for bull races, the roman theatre, where live music is played during the summer and the subterranean galleries date back to the 1st century. But it has known other rich architectural phases during the 4th and then 11th and 12th centuries, making it a highly attractive and culturally rich town.

Palace and Park of Fontainebleau (1981)

Fontainebleau was used as the royal hunting lodge by France’s kings from the 12th century. François I had the palace enlarged and embellished in the 16th century, taking inspiration from Renaissance Italian and French architectural and artistic influences. It is surrounded by an immense park and forest in Ile-de-France.

Located in the heart of northern Burgundy, this abbey was founded by St Bernard of Clairvaux in 1118. The monks who lived there were entirely self-sufficient thanks to the Romanesque buildings that were erected for them: the Abbey Church, the Dormitory, Cloister, Chapter Room, the Common Room, and a Forge.

The ancient theatre of Orange, with its 103-metre long façade, is one of the best preserved of all roman theatres. Built between A.D. 10 and 25, the arch is one of the most beautiful surviving examples of provincial triumphal archs from the reign of Augustus. It commemorates the establishment of the Pax Romana.

From the Great Saltworks of Salins-les-Bains to the Royal Saltworks of Arc-et-Senans, the Production of Open-pan Salt (1982)

The extraction of salt at the saltworks in Salins-les-Bains and Arc-et-Senans lasted from the Middle Ages to the 20th century, demonstrating formidable value in terms of heritage and the passing down of skills. The Royal Saltworks of Arc-et-Senans, near Besançon, was built in 1775 and reflected the ideas of Enlightenment. The Great Saltworks of Salins-les-Bains was active for at least 1200 years until stopping activity in 1962.

Located in Poitou-Charente, the Abbey Church of Saint-Sauvin sur Gartempe is often known as the ‘Romanesque Sistine Chapel’. Built in the 11th century, the abbey and its crypt below contain many beautiful 11th and 12th century murals in outstanding states of preservation.

Home to Stanislas Leszczynski, later Duke of Lorraine, Nancy is a remarkable example of urban planning during the Enlightenment period. Between 1752 and 1756, with the help of architect Héré, Stanislas created spaces that enhanced his prestige while keeping the city practical for the people.

Built shortly before the Christian era, the Pont du Gard was designed to allow Nîmes’ aqueduct to cross the Gard river. It stands 50m high on three levels and is 275m long, testifying to the architectural and engineering genius of the Roman architects of the time and making this landmark a technical and artistic masterpiece.

The Grande Ile is Strasbourg’s historic centre and is surrounded by two arms of the river Ill. It contains an outstanding number of historical buildings all within a compact area. The most famous one is probably the Cathedral built with reddish stone but there are also the Rohan palace and the four ancient churches.

Cathedral of Notre-Dame, Former Abbey of Saint-Rémi and Palace of Tau, Reims (1991)

Reims’ cathedral is another of France’s Gothic art masterpieces and is the result of a technical achievement as the builders used new techniques in the 13th century to build it. The former abbey is the resting place of Archbishop St Rémi who instituted the Holy Annointing of France’s kings.

The evolution of Paris is best seen from the Seine river banks. With landmarks such as the Louvre palace, the Grand and Petit Palais, Notre-Dame Cathedral and the Eiffel Tower, the banks are a popular place to stroll and take in the beauty of Paris.

Saint-Etienne Cathedral in Bourges is dedicated to Saint Stephen and was built between the late 12th and 13th centuries. The Catholic cathedral is admired for its impressive proportions and Gothic design and is the seat of the Archbishop of Bourges.

In the 14th century, Avignon was the seat of the papacy which left its mark on the city’s heritage. The Papal Palace dominates the city as the famous 12th century bridge sticks out at its feet. The entire centre has an exceptional collection of historical monuments that testify to the city’s role in the 14th century.

With its 360km-long networks of waterways linking the Mediterranean to the Atlantic, the Canal du Midi is an outstanding feat of civil engineering built between 1667 and 1694. Because it blends in beautifully with the south’s natural environment, it is also one of the most beautiful navigable waterways of France.

The massive medieval fortifications that surround the city of Carcassone were built upon walls that date back to Late Antiquity making Carcassone an outstanding example of a medieval fortified town. But the city is also remarkable thanks to the work of Viollet-le-Duc who led a campaign to restore the city in the 19th century.

Founded by the Romans in the 1st century BC as the capital of the Three Gauls, Lyon has continued to play a major cultural and economic role in France and Europe. The city boasts many historical buildings scattered across the centre of town, including the impressive Fourvière Basilica that overlooks the city.

The Pilgrimage Route of Santiago de Compostela played a key role in religious and cultural exchange in the Middle Ages and later on. The routes in France are punctuated by several key religious monuments that bear witness to the influence of Christian faith across France and Europe.

Belfries of Belgium and France (1999)

23 belfries in the north of France were inscribed as a group adding to the 32 Belgium belfries listed as UNESCO World Heritage sites. Built between the 11th and 17th centuries, they showcase Roman, Gothic, Renaissance and Baroque styles of architecture and are significant symbols of the winning of civil liberties.

It was the Romans who introduced viticulture to Aquitaine and as St Emilion benefitted from its position on the Santiago de Compostela route, it quickly became a major wine-producing region. It was granted the special status of a ‘jurisdiction’ during the period of English rule in the 12th century.

Stretching across 280km, the Loire Valley is an exceptional cultural landscape of great beauty. It is home to several historic towns and villages, world-famous châteaux, and cultivated lands formed by many centuries of interaction between people and the river Loire itself.

Located on the former territory of the powerful Counts of Champagne, the medieval fortified town of Provins was the venue for great annual trading fairs. The city was structured and designed to host the fairs and all the related activities and has been well preserved since.

After being severely bombed during World War II, Le Havre was rebuilt between 1945 and 1964 following the plans of architect Auguste Perret. The reconstruction of the town is one of the most successful of its time since it managed to respect the former pattern of the city, while applying contemporary urban planning ideas and construction technology.

The Port de la Lune refers to Bordeaux’s old historic centre which was created in the age of Enlightenment and is located on the Garonne river banks. It is recognized for its historical role in cultural exchange, particularly since the 12th century thanks to commercial links to Britain.

Vauban was Louis XIV’s military engineer and is behind 12 fortified towns built from scratch, citadels, urban bastion walls and bastion towers built along the northern, western and eastern borders of France. He was a pioneer who put into practice the theories of putting fortifications into relation with territory.

Built in traditional southern French Gothic style using local red and orange bricks, the imposing fortified cathedral dominates the city of Albi. Other monuments such as the Old Bridge (Pont-Vieux), the Saint-Salvi quarter and its church bear witness the city’s earlier development as an important Episcopal City.

The Causses and the Cévennes, Mediterranean agro-pastoral Cultural Landscape (2011)

The stunning mountain landscapes of the Cévennes and the Causses are representative of the relationship that has existed for nearly 3,000 years between human agricultural activities and the natural environment. Some villages and large stone houses bear witness to the presence of 11th century abbeys.

Prehistoric Pile dwellings around the Alps (2011)

There are 111 small individual sites across Europe where remains of prehistoric pile-dwelling (stilt houses) settlements can be found, 11 of which are in France. The settlements were built from around 5000 to 500 B.C on the edges of lakes, rivers or wetlands in the Alps and are major archaeological sites.

This remarkable landscape was shaped over 3 centuries of coal extraction and spreads over 120,000 hectares. The site bears witness to the desire to create model workers’ cities from the mid 19th century to the 1960s with features such as mining pits, coal transport infrastructure, railway stations, workers’ estates and mining villages.

The Champagne region has been producing sparkling wine following the principles of double fermentation since the early 17th century. Three sites – in Hautvilliers, Reims and Epernay – along with beautiful historic hillsides, underground cellars and Champagne Houses form the entire Champagne production process.

Located in a limestone plateau of the river Ardèche in southern France, this cave contains the earliest-known and best-preserved figurative drawings in the world. Over 1,000 images have been uncovered so far, demonstrating a vast range of techniques, and representing dangerous species along with human activities.

Situated just south of the city of Dijon, the climates are precisely delimited parcels on the slopes of the Côte de Nuits and the Côte de Beaune vineyards. They differ from one another due to specific natural conditions (geology and exposure) as well as vine types and are recognized by the wine they produce.

Quiz: How many of France’s iconic attractions have you visited?

20 things you must do in France