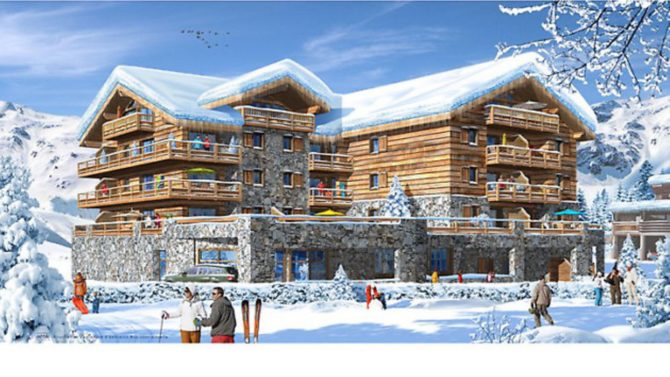 Fifty years after building its first ski properties for sale in the French Alps, the region’s leading developer, MGM, is still identifying new locations in which to provide holiday homes of the type demanded by twenty-first century skiers.

The latest – increasingly known by the text-speak name L2A – is the resort of Les Deux Alpes, a one-hour drive from Grenoble Airport in the Isère département of the country.

The largest ski resort in the Dauphine region and the second oldest in France – after Chamonix in the Haute-Savoie – the lively village of Les Deux Alpes enjoys a reputation for being a snow sure, lift-efficient resort with a great social life and plenty of scope for winter and summer sports.

Later this year MGM will start construction of Chalet Kayla, a development of 29 apartments ranging in size from a one-bedroom property with a floor area of 40 sq m priced at €240,000 to a 105 sq m three-bedroom home on offer at €500,000. All the properties are available to buy off-plan for outright purchase (not leaseback).

The new apartments are among the first to feature the brand new look MGM is rolling out across its developments this year. Its traditionally rustic-style interiors are being replaced with contemporary styling which, according to research, has greater appeal to today’s buyers. Featuring a blend of traditional materials like wood, stone and granite with contemporary modern finishes, some internal walls are clad in wood or have bright white finishes; floors are in a mix of stone and larch parquet, and timber kitchens have given way to contemporary fitted models with granite worktops.

“These changes, combined with greater use of spotlights, create a twenty-first century feel within our traditionally-styled exteriors of local timber and stone,” says Richard Deans who heads the company’s London-based UK sales office.

Chalet Kayla, located just 100 metres from the nearest ski lift, shops, restaurants and ice rink, includes an indoor pool for use by residents.

The biggest skiable glacier in Europe

A special attraction of Les Deux Alpes – whose 200 km of pistes on south-facing slopes attract skiers and snowboarders at all levels of ability – is that it boasts the biggest skiable glacier in Europe. The resort is located at an altitude of 1,650 metres and its ski lifts rise to 3,600 metres.

Les Deux Alpes – The Two Alps – takes its name from the neighbouring mountain villages of Venosc and Mont de Lans, originally quiet pastoral communities in an area once worked by sheep and goat farmers and frequented by crystal diggers and Chamois hunters.

The original ski resort was founded in 1925 when the first access road was completed. In 1946 the first ski school was formed and ten years later the opening of the Diable Gondola followed by the launch one of the first ski passes led to recognition of Les Deux Alpes as a ski resort.