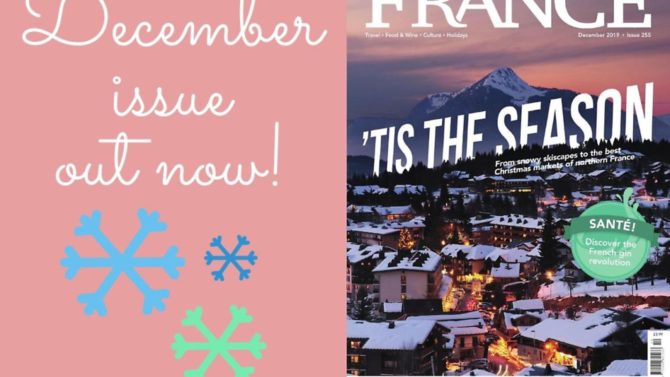 The festive season is on our doorstep and the latest issue of FRANCE Magazine is here to cheer up those cold winter nights!

1) France is making a big mark in the gin scene

The French market may ‘only’ be worth €279m compared to €3bn in the UK, but there are lots of established and up-and-coming producers up and down the country, from Alsace to Provence.

For certain ailments such as arthritis, patients can benefit from taking to the waters under France’s revered healthcare scheme. Some of the country’s most popular spas are in the glorious Alpine département of Savoie.

Explore the spa resorts, ski slopes and Savoyard specialities of Savoie with Janet Brice on P50.

… but rather an embroidery in woollen thread on a linen background! The 68m-long work of art is a sight to behold.

4) Arras is famous for its rats – but don’t be alarmed!

You’ll find the critters in chocolate form at various shops or as murals on various walls throughout the northern city.

Discover the sights and smells of northern France at Christmas with Steve Mather on P44.

5) Laval is a hotspot for ‘naïve art’ in France

Naïve art, usually defined as being created by an artist with no formal training, has its own dedicated museum in the Mayenne capital. Laval is also the birthplace of Henri Rousseau, a famous ‘naïve’ painter who was initially ridiculed by critics.

Canet, star of some of the year’s most popular French films including Non-Fiction and La Belle Époque, has competed in renowned equestrian competitions including the Longines Masters.

Pierre de Villiers gets to know Guillaume on P84.

7) You can be pulled on your skis by a horse in Les Carroz!

Ski jeering is one of the more unusual skiing activities offered by the Alpine resort.

Follow Briony Key on a fun-filled snowy adventure in Les Carroz, our cover star this month, on P54.

8) Amiens is known as the Venice of the north

With its famous hortillonages, the floating market gardens that have been cultivated since the medieval era, the city is renowned for its network of waterways.

Spend a weekend in Amiens with Peter Stewart on P37.

So what are you waiting for? The December 2019 issue of FRANCE Magazine is out now – order your copy here.

Previous Article Win! Paperscapes:Paris by Sandra Lawrence
Next Article Win! Searching for Family and Traditions at the French Table