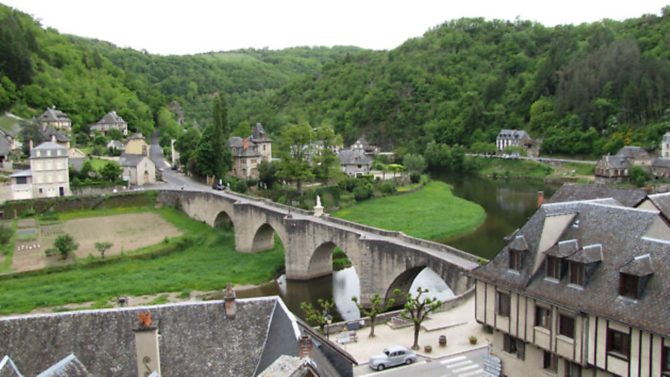 Stepping onto the cobbled streets of Estaing, you could be stepping back in time to a simpler age, when front doors were left unlocked and children played unsupervised in the streets. Yet even today, this is what life is like in the pretty villages of the upper Lot Valley. Of course, the conveniences of modern life have been adopted, but somehow the past and present blend in such a way that the area seems to have remained unchanged for hundreds of years.

The Lot Valley is home to the river of the same name, covering a distance of 481 kilometres, from its source high up on Mont Lozère until it meets the mighty River Garonne in Lot-et-Garonne. It winds its way across five departments and four regions in southern France, and numbers visitor destinations such as the historic village of Conques, the attractive town Villeneuve-sur-Lot and the winemaking centre Cahors among its charms. However, venture further afield into the upper Lot Valley, and you’ll be rewarded with quaint French villages, verdant countryside and age-old traditions.

The upper Lot Valley includes the departments of Aveyron, Cantal, and Lozère. For those searching for a peaceful French life, this stretch of river from Estaing to Saint-Geniez-d’Olt offers it all, including three Plus Beaux Villages de France. Delightful stone houses cluster around the banks of the river, and inhabitants relax in the sunshine on the café terraces holding conversations across the street, with each village offering its own charms and character.

Saint-Geniez-d’Olt – ‘Olt’ is the Occitan name for the Lot – grew up around the river, which was once the heart of the village’s tannery industry. To best discover the delights of this village, climb the steps to the Monument Talabot on the opposite bank. From this vantage point, the slate roofs of the village sprawl out beneath the stunning backdrop of the Aubrac hills, and the River Lot meanders off into the distance. Market stalls line the main square on Saturday mornings and elderly French gentlemen play pétanque and skittles in the grounds of the ancient Augustinian cloister.

Saint-Geniez-d’Olt has been home to expat Janet Baudevin and her children for 20 years, and she now works as an artist, selling her paintings in a shop on the village square, finding endless inspiration for her work in the beautiful surrounding countryside. “I enjoy living in Saint-Geniez because it’s peaceful and the people are friendly, although you do need to learn to speak French or you will find it very difficult,” she told me. “It’s a privilege to live in such a lovely little town on the banks of the River Lot, with its cloistered market square and miles and miles of stunning countryside. Most people come here for a holiday, I sometimes feel as if I’m on holiday all year round.”

Meandering through the Aveyron countryside for just three kilometres, the Lot enters Sainte-Eulalie-d’Olt, a small village of less than 400 inhabitants that proudly bears the label of a Plus Beau Village. If you are looking for a beautiful French house then this is the village for you: picture half-timbered pebble walls; barrel-shaped roofs; blue painted shutters and colourful flowers adorning doorways. A few ‘à vendre’ signs on houses in need of renovation certainly tempted me as I wandered around the village. Sainte-Eulalie is also home to a thriving craft trade with artisan shops throughout the village, including a glass-blower creating unique jewellery and ornaments, and a carpenter making striking pieces from colourful wood.

Continuing west and becoming ever more sinuous, the Lot snakes its way into Espalion, the largest town in this part of the valley and a stop on the Saint-Jacques pilgrim route to Spain. The river bisects the town and has long been at the centre of life here with the pink sandstone Pont Vieux still standing at the heart of Espalion. A small statue of a diver on the river bank hints at the town’s most famous residents, Benoît Roucayrol and Auguste Denayrouze, who invented the first modern independent diving suit in Espalion and even tested it in the waters of the River Lot.

Flowing through the town and on towards its confluence with the River Truyère, the river arrives in another of the Lot Valley’s Plus Beaux Villages de France: Estaing. Growing up in a haphazard fashion around the château, the village has pleasingly windy streets that lead from the castle to the river. Along the bank of the river are several cafés, which offer the perfect place to pause and drink in the scenery, listen to locals call out to each other, and enjoy the relaxed pace of life of the Lot Valley.

After Estaing, the river flows sedately to Entraygues-sur-Truyère where it is joined by its largest tributary and then turns towards the west to meet the tourist hot spots of Conques and Cahors. If you are reluctant to relinquish the peace of the upper Lot Valley then now is the time to leave the river and head up into the hills of the Aubrac plateau: miles of green pastures that are home to the distinctive Aubrac cows and a favourite with hikers on the SaintJacques pilgrim route from Le Puy-en-Velay in Auvergne.

The pilgrim route – known in French as the Chemin de Saint-Jacques-de-Compostelle – is UNESCO listed and still attracts tens of thousands of modern-day pilgrims traversing part or the whole of the route to the shrine of Saint James in Santiago de Compostela in Spain. Nowadays, many choose to walk along the route for non-religious reasons. A well-signposted path through the stunning countryside of central and southern France, it is popular with hikers looking for a challenge.

Hikers have an abundance of routes to choose from around the Lot Valley, whether following the Saint-Jacques path across the Aubrac plateau or exploring the stunning Cantal mountain range with its lush valleys and soaring peaks. Horse riding is another popular activity in the Aubrac, and if you plan your visit to be in the area at the end of May, you can witness the transhumance festivities when the cows, adorned with ribbons and flowers, are led from the valleys to their summer pastures on the plateau – a landmark event in local calendars.

The ever-present River Lot also provides an abundance of activities whether you are happy to dip in your toes or prefer to keep your feet firmly on dry land. Cycle paths offer a relaxing way to explore the river, while kayaks and canoes are a common sight on the Lot in summer. If you prefer a less energetic river trip, try a cruise along the River Truyère, which passes beneath the impressive Viaduc de Garabit, built in 1884 by Gustav Eiffel, just before he began work on the Eiffel Tower. Or maybe try a peaceful afternoon relaxing in La Chaldette spa, near Brion, or at one of the many angling spots.

While summer sees an influx of visitors, winter has its own attractions with the Massif Central, just an hour and a half’s drive from Estaing, covered in snow from December until April. Le Lioran ski resort is the largest ski area in Auvergne, and offers a considerably cheaper alternative to the crowded resorts of the Alps.

One of the highlights of any visit to France is the delicious food, whether you dine at a Michelin-starred restaurant or a local bistro, and the Lot Valley does not disappoint. Along the river you can look forward to fresh fish, especially trout that tastes delicious simply grilled. While up on the Aubrac plateau, tender beef and veal dishes populate every menu and taste more delicious with the knowledge that the cows have grazed on the nearby verdant pastures.

Along with the rest of France, Cantal, Lozère and Aveyron have plenty of local cheeses to boast about; ranging from the strong blue Roquefort, made with ewe’s milk, to creamy Laguiole traditionally made in burons – Auvergne shepherds’ huts – dotted around the Aubrac plateau. Many of these burons have been transformed into restaurants where walkers can enjoy traditional dishes, while being warmed by a roaring fire and a herbal gentiane apéritif.

One dish you will see on virtually every menu is aligot, the undoubted speciality of the area that is often served in giant cauldrons in a buron. A mouth-wateringly rich mixture of mashed potatoes, garlic and local cheese that rolls off the spoon, aligot, according to legend, was given to the pilgrims traversing the harsh terrain of the Aubrac to sustain them on their way to Spain. To accompany all this sumptuous food, the Lot Valley offers a number of wines including those made at Estaing and Cahors.

With good food and wine, pretty villages and verdant countryside it’s easy to see why the Lot Valley appeals when looking for a home across the Channel. Steven Weller is one of those Brits, who moved to Aveyron eight years ago and now works as a property agent in the area helping others to find their dream home. “The Lot Valley is home to many Brits who love the lazy pace of life and the beautiful scenery,” he says. “There are a fairly equal number of those who live here full-time and those who have holiday homes, but many holiday-home owners stay for six-month periods at a time. “There are several reasons the area is popular. First, the countryside is second to none and so varied. The number of Brits living here has nowhere near reached saturation point, and access is easy from the UK with regular low-cost flights to Rodez, Brive, Bergerac and Toulouse. Importantly, property prices are reasonable, with renovated country properties, with or without pools, ranging from €200,000 to €300,000.”

Add to that the feeling of stepping back in time to a simpler age, and the promise of a peaceful life in beautiful surroundings and friendly French neighbours. Why wouldn’t you want to live in the Lot Valley?

Lot Valley www.valleedulot.com Aveyron www.tourisme-aveyron.com Cantal www.cantal-destination.com Lozère www.lozere-tourisme.comThinking about buying a property in the Lot Valley? Read our interview with a local estate agent to find out about the property market