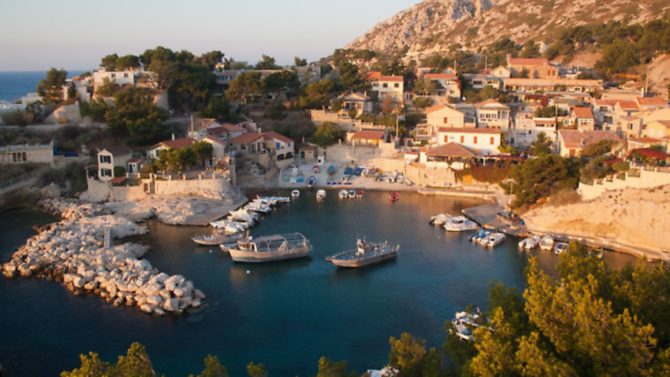 Home to Marseille, Arles, Saint-Rémy-de-Provence, the wildlife of the Camargue and the Calanques National Park, Bouches-du-Rhône in Provence is an exciting and varied department to explore

Framed by the rivers Rhône and Durance in south-west Provence, Bouches-du-Rhône is a land of mountains and beaches, wild lagoons, medieval villages and colourful cities bathed in translucent Mediterranean light. North of Arles, the Rhône splits into the Petit and Grand Rhône, creating the delta of the Camargue and the two river mouths, which give their name to the department.

On a wide west-facing bay, the capital Marseille claims 300 days of sunshine a year. The city was founded by the Phoenicians in 600BC, and is the oldest in France as well as the second largest in terms of population; covering an area twice the size of Paris, and half of it protected land.

With its thriving cultural scene – the city was named European Capital of Culture for 2013 – shopping, palaces and parks, Marseille has it all. Take a walk down the Canebière, the elegant boulevard built in the 17th century under the reign of Louis XIV, and as you emerge on the quay where fishermen land their catch, the Vieux-Port takes your breath away: myriad yachts bobbing at anchor, two mighty forts guarding the entrance, flower market and stalls, and al fresco restaurants serving fresh salads, seafood platters and the popular bouillabaisse– three kinds of fish floating in a tasty saffron broth. Beyond the promenade, in a concrete cube fashioned to resemble delicate lace, the new Museum of European and Mediterranean Civilisations is a must-visit spot from which to watch the sun set.

Meanwhile, the eco-ferry glides back and forth across the water under the watchful eye of the Catholic basilica, Notre-Dame de la Garde, which is perched on a hill 154m above the town. Rich in marble and gold leaf and known as ‘la Bonne Mère’ to every Marseillais, this Romanesque Byzantine basilica looks down on the city and its 111 vieux quartiers, which nestle between the hills and the open sea.

These quartiers are some of city’s greatest charms, where courtyards draped in vines and oleander sit side-by-side with shaded squares home to wrought-iron balconies framed with painted shutters. Here artisans paint Nativity figures or bake orange-flavoured biscuits, alongside tiny shops selling local specialities including pastis and Marseille soap. Among the most picturesque quartiers are Le Panier, climbing up the hill, and L’Estaque, where artists set up their easels in the footsteps of Cézanne and Braque. Far below, the coast meanders into the distance, fringed with quiet creeks; a world away from the urban sands of Le Prado to the south. Just 20 minutes offshore, the Frioul Islands beckon, as bleached as bones, and proud of their seabird colonies and the Château d’If featured in the Alexandre Dumas novel The Count of Monte-Cristo.

South-east of Marseille, the Calanques National Park boasts one of the most beautiful stretches of coast in southern France. With its steep limestone cliffs and deep-blue sheltered inlets, it is rich in marine life. Ramblers make their way along steep arid trails, which are best in spring, while yachts glide in secluded coves lapped by near-tropical water. More than 900 species of plants have been recorded in the park, from rare specimens to the ubiquitous Aleppo pine and Mediterranean scrub, fragrant with myrtle, juniper and sage. Eagles circle above some of the highest sea cliffs in Europe, among them the sheer rock face of Cap Canaille, between Cassis and La Ciotat.

Buzzing in season, Cassis is a pretty little place, snuggling among the vineyards at the foot of verdant hills and precipitous cliffs. A few fishing boats doze along the quay, quaint alleyways, and waterside restaurants offer sea bass, lobster and more, accompanied by the local white wine. A scenic drive along the cliff top leads to the resort of La Ciotat with its old village, marina and one of the best family beaches around.

La Ciotat has two claims to fame. The first is as the setting of the short film L’arrivée d’un train en gare de La Ciotat from cinema pioneers the Lumière brothers, who screened the film as a private show in the Eden Theatre. You can see this and other memorabilia in the town museum Le Musée Ciotaden. The second claim to fame of this Mediterranean town is pétanque. The sport was born here around 1910, when a disabled resident was allowed to play boules with ‘pieds tanqués’ (‘feet still’).

Head inland and you soon reach Aix-en-Provence, an elegant vibrant and relaxed city, named after its Roman founder Sextius, and its abundant spring water. The ancient capital of Provence grew into a reputed centre of learning and art, especially under the patronage of Good King René, who introduced Muscat grapes in the 15th century. In this self-dubbed ‘city of 1,000 fountains’, his statue rises above a quiet pool at the top of the Cours Mirabeau, the majestic leafy avenue lined with smart façades and civilised cafés, such as the Brasserie des Deux Garçons where Cézanne and Zola feature on a long list of illustrious clients.

Just a few steps away, medieval lanes charm at every twist and turn. Here you can spot the Fontaine des Quatres Dauphins and there a clock tower; further on stands the cathedral spanning more than 12 centuries and the stylish Hôtel de Ville, while typical Provençal markets bursting with flavours and colours showcase olives, aubergines and peaches jostling among the traditional calissons sweets made of almond and candied melon.

But above of all, Aix loves its culture, music festivals, museums, galleries and, of course, Cézanne, whose modest statue looks across to the magnificent Fontaine de la Rotonde at the entrance to the Cours Mirabeau. You can visit his studio on the edge of town or hike on the slopes of Montagne Sainte-Victoire, the dramatic limestone ridge which he captured on canvas so many times, towering more than 1,000 metres above the River Arc.

Beyond Salon-de-Provence, an attractive market town and resting place of Nostradamus, the barren crags of the Alpilles barely reach 500 metres, yet this regional nature park is enchanting with its scrubland, pine and oak forests, olive groves and vineyards sprinkled with farmhouses and lonely cypress trees. Traditional festivals punctuate the seasons, from the summer solstice to the grape harvest or the transhumance when sheep are led to high pastures. It’s rural Provence at its best, loved by writers and artists, including the distraught Van Gogh who sought refuge in the asylum in Saint-Rémy-de-Provence where he painted his famous work Starry Night. From the nostalgic cloister and garden haunted by his tormented soul to the nearby Roman ruins of Glanum, Saint-Rémy leaves no one untouched. Not so far away, the citadel of Les Baux-de-Provence rises proudly towards the sky, an eagle’s nest on a rocky plateau, listed among the most beautiful villages in France for its architectural gems and superb panorama stretching on a clear day from the Alpilles to Arles and beyond. There are family-oriented events and activities on medieval themes held here, as well as some amazing light and sound shows, which take place in the old limestone quarries.

Near the top of the delta, among the sunflower fields, Arles enjoys a privileged location on the Grand Rhône, between the Alpilles, the plain of Crau and to the south, the wild lands of the Camargue. Settled for almost 3,000 years, the city is on the UNESCO World Heritage List for its Roman and Romanesque monuments; the latter including the church of Saint-Trophime with its richly decorated portal and cloister. The Musée de l’Arles et de la Provence Antiques displays statues, mosaics and more while across town, Roman heritage ranges from the Thermes de Constantin and burial grounds of Alyscamps to the Théâtre Antique d’Arles, the underground galleries once supporting the forum and the amphitheatre where the clamour of today’s ferias, bull runs and fights, echo the games of long ago. Here Picasso found inspiration for 57 drawings and paintings.

Arles has always attracted artists and as well as Picasso, it was home to Van Gogh, who in the course of 15 months produced more than 200 works, from the iconic Sunflowers to the Café Terrace at Night showing the Place du Forum. The old hospital, where prior to Saint-Rémy, he was admitted for depression, has now been restored as the Van Gogh visitor centre, while near the river, the newly opened Van Gogh Foundation highlights his influence on contemporary artists and displays his works.

Today, Arles is all about the French joie de vivre that lingers along the river banks, the convivial squares and quiet lanes. The town hosts many cultural events and festivals like the exciting Fête des Gardians, on 1 May, when flamboyant herdsmen from the Camargue display their traditions and skills on horseback.

Arles is the gateway to the Camargue but down on the coast, Saintes-Maries-de-la-Mer is the capital. Little more than a village stranded between lagoons and sea ‘at the end of the world’, in season it attracts holiday crowds in search of unspoilt scenery and folklore. According to legend, two saints from Palestine, Marie Salomé and Marie Jacobé, were cast adrift on this shore with their servant Sara, patron saint of gypsies. And so they come from all over Europe for an annual pilgrimage when amid much commotion, statues of the saints are carried to the sea, accompanied by devotees, gardiansin full costume and snap-happy visitors.

But beyond the village and its fortified church lies a regional nature park bordered by dunes and windswept sands, backed by salt marshes, meadows, rivers, swamps and ponds. It’s the only one of its kind in Europe; the domain of black bulls and white Camargue horses; ranches called manades; traditional cottages thatched with reeds; and in the upper and middle reaches, orchards, wheat and rice as luminous as the sky. There are carpets of sea lavender, yellow irises, tamarisks, butterflies hovering here and there, and clouds of dragonflies. The land is flat, sparsely populated and ideal for walking or cycling, though if you wish to explore remote corners, horseback is best.

At the heart of it all is the Étang de Vaccarès, the park’s largest lagoon and a haven for pink flamingos who feed in shallow salt water. Just one of 350 species of resident or migratory birds in these pristine wetlands, they are the emblem of the Camargue, adding their own touch of colour to the rich tapestry of Bouches-du-Rhône.

Surprisingly in such an attractive department, there is plenty of property on the market. The sparsely populated Camargue has fewer opportunities, but there are bargains to be found inland. Mausanne, Paradou and other villages in the Alpilles are worth considering for their authentic character – though whether you’re simply planning a holiday, or a long-term stay, Bouches-du-Rhône has it all.

Bouches-du-Rhône tourist board www.visitprovence.comWe venture further north in Provence to explore the department of Drôme or read about life in the mountains with our article about the Hautes-Pyrénées