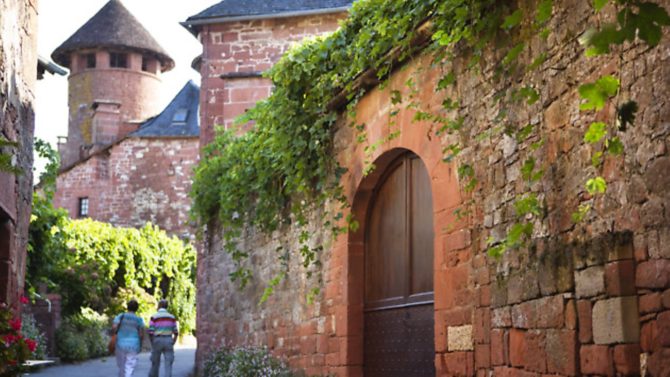 Travel beyond the well-known hotspots of Dordogne and into the Dordogne Valley, and you will find pretty villages, peaceful countryside, delicious food and wine and a strong culture

As a long-standing favourite with British second-home owners and expats, the department of Dordogne has become unfavourably dubbed in some circles as ‘Dordogneshire’ or ‘Little England’, due to a reputation for being full of Brits. This image has been cited by many a wannabe expat fearful of exchanging one British village for another – albeit one with better weather.

However, while there may be some villages that answer to this description, you don’t have to travel far from the department’s hotspots to find yourself in the heart of rural France. Look beyond, to the wider Dordogne Valley, and you’ll find local French residents, delicious regional food and wine, and village fêtes and festivals, in addition to all the reasons that attracted Brits to the area in the first place – such as the weather, the scenery, the culture and the gastronomy – which are still as valid today as they were 20 years ago. It is therefore not surprising that many Brits are now looking to the Dordogne Valley.

“Being in the Lot, but still in the valley of the Dordogne, we feel we have the best of both worlds,” says expat Annette Berrecloth. She and her husband Clive moved to Saint-Sozy, a small village on the banks of the River Dordogne only 10 minutes from Souillac, in 2005. They started their property search in Dordogne, in order to be near Bergerac airport, but soon decided to cast the net a little wider.

“We quickly realised that although the department of Dordogne is very desirable with wonderful scenery and pretty villages, we felt it was also highly populated with expats. So we decided to look in the north of the Lot department, which is still in the Dordogne Valley,” Annette explains. “We have now lived here for more than 10 years and we love the area for the lush growth, the wonderful summers and cold winters, the fabulous deep valleys and the beautiful River Dordogne, the medieval villages and the French culture. Although not surrounded by expats, we have made some good friendships in both the English-speaking and French-speaking communities.”

The Dordogne Valley spans three departments along the River Dordogne in south-west France – Lot, Dordogne, and Corrèze – and while they may be in different administrative regions (Midi-Pyrénées, Aquitaine, and Limousin respectively), they still share a great deal of history and traditions and are connected by France’s fifth longest river, the River Dordogne. Designated a Biosphere Reserve by UNESCO two years ago, the valley boasts an abundance of unspoilt countryside and beautifully preserved towns and villages, a number of which have been named ‘Plus Beaux Villages de France’ by the association of the same name, which seeks to highlight and preserve the heritage of the country’s most picturesque villages.

Not only does the Dordogne Valley have several of these villages, but the Les Plus Beaux Villages de France association actually started here, founded in 1982 by the mayor of Collonges-la-Rouge, in Corrèze, indisputably one of the most beautiful villages in France. Built using distinctive red sandstone from nearby quarries, the village is certainly striking and its red buildings glow in the warm sunshine. Not far from Collonges-la-Rouge are the Plus Beaux Villages of Curemonte and Turenne, perched high on a steep rocky outcrop offering spectacular views.

On the banks of the river, Carennac is another of the valley’s Plus Beaux Villages. This small village of only 200-odd inhabitants is a maze of historic Renaissance houses built around an 11th-century Cluny priory, and has proved popular with those who enjoy buying old houses and restoring them to their former glory.

Further east in Corrèze, along the River Dordogne, is the village of Beaulieu-sur-Dordogne. Although not named as one of France’s Plus Beaux Villages, ‘Beaulieu’ translates as ‘beautiful place’, and it more than lives up to its name. Located in a dip in the meander of the river, Beaulieu-surDordogne is a medieval town built around an abbey church. A day could easily be whiled away here, strolling along the banks of the river or maybe taking to the water on a tour in a traditional flat-bottomed gabare boat, followed by a meal of delicious local produce. Particularly famous for its strawberries, the village holds an annual festival in May.

Other must-see villages in the area include Rocamadour in the Lot department, dramatically built into the rock of a sheer cliff in the Parc Naturel Régional des Causses du Quercy. Home to the statue of the Black Virgin and the tomb of Saint-Amadour, Rocamadour is on the route to Santiago de Compostela and has long attracted pilgrims, although now many of the visitors come purely to marvel at the beauty of the village. The steep climb down to the village from the visitors’ car park (it feels even steeper going back up!) is more than matched by the resulting sight of this marvel of medieval construction and vision.

During the Hundred Years’ War the River Dordogne marked the divide between the English and French frontiers. History has left its mark on the area in the form of numerous impressive châteaux – more than 1,000 it is claimed. Not all of them are open to the public, but many have been turned into tourist attractions, in order to pay for their upkeep. In the Dordogne department, the Château de Puymartin near Sarlat-la-Canéda relies on its legend of the Dame Blanche ghost to pull in visitors, while the Château des Milandes offers birds of prey demonstrations, dressing-up costumes for children and an interesting exhibition about former owner and music hall star Josephine Baker.

Of the main towns in the Dordogne Valley, Sarlat-la-Canéda and Brive-la-Gaillarde are of particular note for visitors. As one of the major tourist destinations in Dordogne, Sarlat-la-Canéda welcomes thousands of visitors, especially in the summer when its restaurant terraces and market square are brimming with visitors soaking up the sun and the atmosphere. Sarlat-la-Canéda was the first town in France to be protected under the Malraux law of 1962, and now has more listed buildings per square metre than anywhere else in Europe. Its medieval mansions have been carefully restored and its pedestrianised centre makes it easy to explore the narrow streets. Visit on a Saturday to experience the popular food market, which brings people from far and wide to browse the stalls selling local produce.

Local markets in the Dordogne Valley are an opportunity to stock up on home-grown local specialities, and are also the place to go to meet friends and neighbours. The valley’s other major town, Brive-la-Gaillarde in the Corrèze deparment, has a Saturday market to rival Sarlat-la-Canéda’s. Although not as well known outside of the area, Brive-la-Gaillarde’s food markets are a sight to behold, packed with stalls selling everything from fruit, vegetables and local cheeses to live chickens and rabbits.

Brive-la Gaillarde is a charming town with a pedestrianised old centre, which now houses a pleasant mixture of modern shops and family-run artisan businesses, such as Distillerie Denoix, which has been producing walnut liqueurs since 1839. And, if distilleries are on your radar, then Souillac’s traditional Distillerie Louis Roque in Lot houses a museum with traditional copper stills and presses.

Brive-la-Gaillard is known for two things: food and rugby, which is a way of life familiar to former England rugby player Jamie Noon, who transferred to the town in 2009 with his family and hasn’t looked back since.

“When I retired from rugby we decided to stay here for a bit longer. The people we had met over the four years we’d been here were brilliant with us and the kids were all settled nicely so it seemed like an easy decision,” says Jamie. “I love the open spaces and countryside that the region has to offer, and I’m a big fan of fishing and mountain biking so it’s perfect for that. The people are nice and it isn’t too busy. The main thing has to be the security for the kids though. The French are very family-orientated and we have found that quite different to England. The weather is normally better than back home and there is so much to learn from the culture over here.”

For many expats a move to Dordogne is not only the start of a new life but also of a new business. Roger Haigh, of the Franco British Chamber of Commerce and Industry in Dordogne, meets many expats embarking upon a business venture and provides support and contacts. “Tourism is the most important industry in this area and so many expats set up gîtes, chambres d’hôtes, cafes, hotels and restaurants. Due to the ease of commuting to the UK and communication via the internet, there are also a number of expats in Dordogne who have kept their original trade.”

Dordogne has a reputation as a gastronomic heartland and this is certainly not exaggerated; food is at the heart of every town and village in the valley. Whether you prefer stylish dishes created by Michelin-starred chefs or simple local fare in family-run restaurants, you’ll have no shortage of dishes to choose from. The prized foie gras and black truffles are on most gastronomic menus, while cèpe mushrooms, walnuts and duck feature in almost every dish.

Walnut groves can be seen throughout the valley, and the Périgord walnut has been granted protected AOC status. A number of small farms in the area produce them, including the Moulin à Huile de Noix in Martel in the Lot department, and as well as being sold as grown, you can buy almost every variation of walnut products imagineable, from liqueurs through to bread and oils.

The Dordogne Valley has recently become more accessible with the opening of its new airport Brive Vallée de la Dordogne in Corrèze in 2010, welcoming regular flights from London City and London Stansted airports. This puts the area within easy reach, and along with the attractions of the climate, delicious food and wine, plus an abundance of pretty villages and lively towns to choose from, it could be the perfect choice for anyone looking for the ‘real France’, with all its charm and history. Though close by, one thing’s for sure –‘Dordogneshire’ it most certainly is not!

Thinking about buying a property in the Dordogne Valley? Find out about the property market and other essential information.