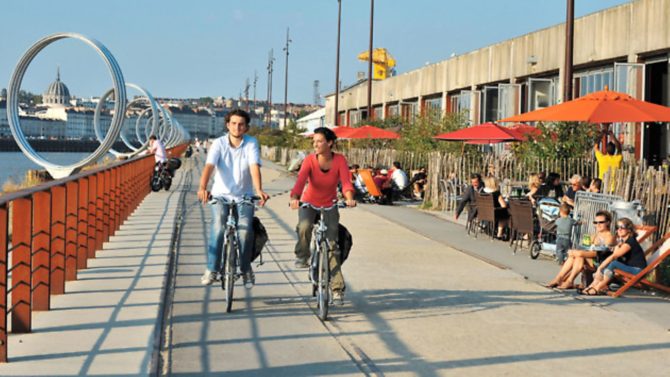 With beautiful beaches, rolling countryside and the dynamic city of Nantes, as well as a fascinating history and rich cultural heritage, Loire-Atlantique in western France is a department to discover

Loire-Atlantique is a fitting name for the department where the longest river in France finally reaches the ocean. Set in the west of the Pays de la Loire region, it is laced with rivers, meadows and wetlands, fringed by an Atlantic shore festooned with sweeping sands and secluded creeks. Here the sun sets over the ocean and Brittany is just on the doorstep. Manyt residents claim to be Breton, especially north of the estuary, and sometimes you can spot the black and white Breton flag fluttering along the lanes.

Loire-Atlantique is home to Nantes, the sixth largest city in France, the Château des Ducs de Bretagne holds centre stage. Built in the 15th century as a residence for the court and fortress against French troops, it is haunted by tales of Anne de Bretagne, the young Duchess of Brittany and patron of the arts, who was coerced into marrying two successive French kings. Brittany lost its independence in 1532 and, together with the tomb of the last duke in the cathedral, the castle is living proof of Nantes’ past.

The old town has traditional shops and a few halftimbered buildings, but you soon reach the 18th- and 19th-century dwellings built on the maritime and slave trade, which are acknowledged in a moving riverside memorial. The elegant Feydeau district, Place Royale and its sparkling fountain, and Place Graslin with its neo-classical theatre, are superb examples of this golden age, alongside the stylish shopping arcade of Passage Pommeraye, which is graced by Renaissance-style muses. Perhaps they still dream of the ‘Venice of the West’ when many waterways criss-crossed the town; only later to be filled in to prevent health hazards and floods.

Here the River Loire is as majestic as ever, joined by the River Erdre from the north and the River Sèvre Nantaise from the south. The Navibus boat service sails across to Trentemoult, a former fishing village, which has retained much of its rustic colourful charm. This is a great place to enjoy a seafood platter and a glass of wine while gazing at the alluring cityscape across the water. Nantes is a pristine city proud of its eco-friendly trams, and gardens and parks rich in camellias, magnolias and exotic plants brought back by sailors of yore. Its charms continue to attract newcomers:

“I come from West Yorkshire,” says Lucy Clarke, “and I wanted a year out. I chose Loire-Atlantique because I found work as an au pair in Nantes and I could bring my horse. It turned out to be a great choice. Nantes is so dynamic; it’s a good-sized city and close to the beach. After a year, I didn’t want to leave so I trained to be an English teacher. I think this will be a fantastic place to bring up a family one day.”

On a sunny café-terrace in the city centre, there’s much going on under the watchful eye of the Tour de Bretagne, a 32-storey office block where the rooftop bar, Le Nid (‘the nest’), offers panoramic views and a playful contemporary interior, where visitors enjoy drinks seated on the ‘eggs’ for chairs.

When Nantes lost its shipyards on the Loire island, the city looked to artists and craftsmen to reinvent itself. It all began with Les Machines de l’Île, a series of larger than life automated wooden structures which you can ride in: here a giant plodding elephant, there a flying eagle, or a three-tier ‘underwater’ carousel inspired by the imaginary world of 10,000 Leagues Under the Sea author Jules Vernes, the city’s famous son. Les Machines de l’Île have been much praised as an innovative attraction, yet the city’s creative vision didn’t stop there. Every summer, the Voyage à Nantes art installation programme invites artists from all over the world to exhibit in the open air. There’s no limit to the imagination, as temporary works are added to the permanent displays set up in Nantes, Saint-Nazaire and along the estuary which links them. Exhibits are connected to the environment, and include Villa Cheminée, a cottage atop a chimney mirroring those of the nearby power station, and Inconcevable, a boat attempting to jump out of the canal back into the Loire, or the leaning Maison dans la Loire, trapped forever by water and silt. Out in the open countryside, the estuary is a haven for birds and a lovely place for walking, cycling and cruising in season.

At the mouth of the Loire, hailed by one of the most impressive bridges in the country, Saint-Nazaire is a major port and industrial hub, but it is also a feel-good city with a seaside promenade, an extensive network of cycle tracks and a string of beaches north of the estuary.

On this romantic coastline, dubbed the ‘Côte d’Amour’, La Baule-Escoublac sits on a fabulous 8km bay offering water-based activities. Children frolic on the sand; couples of all ages stroll along the promenade; others swim, jog or simply enjoy the ocean air and sea water spas. In town, the atmosphere is typically French: small boutiques, markets awash with fresh vegetables and gleaming seafood, quaint restaurants like the Table de Loïc at the back of a grocer’s shop, and oyster bars, including the locals’ favourite haunt, Chez l’Écailleur. In the winding lanes behind the seafront apartments, myriad Belle Époque villas nestle under the pine trees, the properties set out like miniature châteaux topped by silvery roofs, with some half-timbered, and painted green, orange or blue. They bear witness to a once exclusive resort now open to everyone.

Beyond La Baule-Escoublac, the long ribbon of sand gives way to a dramatic wild coast where sandy coves and rocky creeks meander below the cliffs, punctuated by caves and dramatic crags. There are no large-scale developments here, rather a coastal path fringed with wild flowers and gorse, and old fishing villages and marinas, such as Batzsur-Mer and, at the tip of the Guérande peninsula, Le Croisic. Here, history remains: the crêperies serving sweet and savoury pancakes, the shops promising Saveurs de Bretagne, the postcards and souvenirs bearing similar labels. It is busy in season but this ‘petite cité de caractère’ has kept its traditional atmosphere, most exciting when squawking seagulls greet the return of the fishing fleet.

“I moved here in 2004 with my two children”, says Lorraine Green, from Swindon. “First to La Brière, and now we’re in Batz-sur-Mer where I’d been coming on holiday since I was 10 I love the sea and all the contrasts along the coast. It’s stunning. I work at the university in Saint-Nazaire, and Nantes is only 45 minutes away. The food here is superb. The people are sincere and full of fun, and I do quite a bit of sport. I’m proud to have this dual culture, and have done my best to bring up my children the same way. And of course, there’s the countryside, which is just as varied and beautiful as the coast.”

That’s true. A short drive inland, the salt marshes display ever-changing colours, from russet and gold reeds to silvery blue or emerald waters reflecting the mood of the sky. Here and there a paludier (salt marsh worker) rakes the finest salt from the surface, white pyramids glisten on the banks and on a nearby hillock, the medieval ramparts of Guérande keep watch over an old town firmly rooted in tradition. Beyond the massive gate of Saint-Michel, Guérande is all granite and slate leading to the collegiate church, and its typical jumble of architectural features.

Barely a stone’s throw away, the Parc Naturel Régional de Brière boasts the second largest wetlands in France after the Camargue. The freshwater marshes and canals can be explored on a flat-bottom boat; gliding silently through the greenery where warblers and sparrows share their habitat with grey herons, ducks and migrating birds. The Parc Naturel Régional de Brière is also a rich agricultural land, dotted with thatched hamlets and here and there an old mill, a bread oven or an ancient megalithic site. There are footpaths and cycling trails and also Kerhinet, a village-like museum showcasing traditional cottages, workshops and a farmyard complete with animals and old machinery.

Further inland and once described as the most beautiful river in France, the Erdre reveals itself like an idyllic painting: lonely fishermen and weeping willows, tiny harbours and misty lakes; eclectic châteaux, manors and follies sprinkled along its verdant banks. In the 18th century, the newly rich made this bucolic valley their favourite country escape, asserting their status in fanciful ways. In the far north of the department, around Châteaubriant, the middle country is a quiet land of forests and ponds, and humble villages hiding a surprise or two: here a sturdy medieval castle, there a forlorn chapel or a fortified church.

South of the estuary, Loire-Atlantique takes on a different face as red roofs and white walls replace granite and slate, and the bracing Côte de Jade replaces the Côte d’Amour. Beyond the sweeping sands of Saint-Brévinles-Pins and Tharon-Plage, the Saint-Gildas headland offers spectacular views from Le Croisic to the estuary and across the Bay of Bourgneuf to Noirmoutier in the neighbouring Vendée department. Not so far away, the legendary castle of Bluebeard guards the pretty harbour of Pornic where writers and artists came in droves in the 19th century. Today, families relax on the sands and along the coast; fishing huts on stilts glow in the setting sun.

Head inland and you come to Grand-Lieu, one of the largest freshwater lakes in France, which measures up to 65km in circumference during the winter floods. Surrounded by grasses and reeds, it is a mysterious sort of place and sometimes, they say, you might hear the chiming of church bells from a village submerged long ago. A protected nature reserve, it is the domain of a few fishermen netting eels and large numbers of birds – spoonbills, ducks, marsh harriers, egrets and more.

Meanwhile in the south-east, vineyards spread across the plain and hills. This is the realm of the Muscadet grape, the perfect accompaniment in wine form to fish, shellfish, white meat and even cheese. Many wine estates are open to visitors, among them the Domaine de la Vinçonnière where the Perraud family have been for seven generations. “It is all about quality,” explains Sylvie, currently at the helm. “It’s a demanding job but I am passionate about it.”

From tender green to autumn colours, the vignoble nantaisis enchanting but along the River Sèvre, the village of Clisson is simply a dream. On the edge of Loire-Atlantique, it was destroyed in the aftermath of the revolution, and was rebuilt with gently sloping roofs, arched windows and decorative brickwork in warm colours. On the hilltop, a public park offers wonderful views over the village, its striking bridge and cascading waters. Here, at the confluence of the Sèvre and the River Moine, you cannot forget history; across the river, the medieval castle rises as proudly as ever, the birthplace and favourite country residence of one François II. And, if the noblesse of France decreed Loire-Atlantique a favourite, there’s every reason to explore life here for yourself.

Previous Article August 2015 issue of French Property News out now!
Next Article WIN! A copy of Picnic in Provence