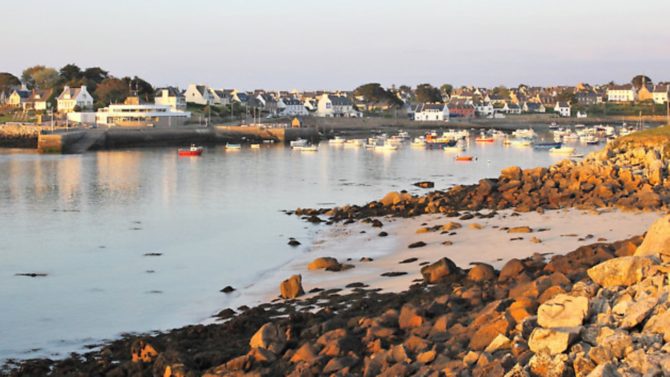 With miles of wild coastline and green countryside within easy reach of the UK, Finistère in Brittany has plenty to offer expats, says Ben Palfreyman

With its windswept crags and wave-beaten coves, coupled with the winsome charm of isolated moss-covered chapelles and the sharp intake of breath from visitors taking in sweeping maritime landscape views for the first time, Brittany’s Finistère department on the region’s westernmost tip truly is a sight to behold.

These elements are just a few among the many that make up the delightful 750 miles of coastline surrounding three sides of Finistère, along with unforgettable smells of the sea, and glistening reflections of the lights of fishermen’s cottages on the dusky rippling water.

Arriving by ferry, as many Brits do, this harbourside feel creates a striking first impression, especially if you choose to cross the Channel to Finistère’s port town of Roscoff. Within minutes of arriving, visitors are transported into a world of Breton chic, with the town’s plethora of boulangeries, crêperies and galleries jostled together along the winding streets of this Petite Cité de Caractère.

Founded on the wealth of pirates and merchant sailors, Roscoff is still one of the most elegant towns in the department. The architecture is a classic Breton mix of half-timbered townhouses from the 16th and 17th centuries, alongside granite cottages that cluster around the beach and colourful bars and cafés vying for attention.

The town is also home to one of the more unusual museums in the country: the Maison des Johnnies, which celebrates the history of the Roscoff onion. The name refers to the French farmers who used to walk or cycle around England selling their characteristic pink onions. While the days of this delightful caricature are all but over – and yes, these Roscoff farmers are guilty of creating this stereotype – the Onion Johnnies continue to celebrate their heritage with a festival every August, and have even been awarded an AOC label to protect this unique tradition.

As across all of France, there are many speciality products and dishes that characterise the area; in Finistère this means Plougastel strawberries, kouign-amann (a caramelised butter cake) and the crêpe dentelle.

While many are drawn to this corner of France for its wild coastal landscapes, its urban heritage is well worth exploring too, including the departmental capital Quimper, as well as the historic towns of Morlaix and Concarneau. As the land begins to jut out until it reaches its most westerly point at the Pointe du Raz, two further Petite Cités de Caractère stand proud: Locronan and Pont-Croix. While the former is on a grander scale than the latter, both exude an old-world charm, as if time really has managed to stand still. Boasting beautiful churches, untouched squares and delightful cobbled streets, they are a joy to explore and are not to be missed by anyone who ventures into this area.

Aside from its streets, Locronan’s appeal is also in the views of the surrounding valley countryside, which appears in view now and again as you reach the end of a lane or pass a gap between two ivy-covered houses.

Once your appetite for Finistère’s medieval towns has been satisfied, it is time to head out to explore the rural heartlands of the department. While every local you meet has their own favourite place for une randonnée (a hike), some of the best are found just beyond the valleys that surround Locronan, by heading into the Crozon Peninsula and Brittany’s only regional park, the beautiful Parc Naturel Régional d’Armorique.

These areas provide a wide choice of hiking opportunities, from the paths of the natural moors and sandy dunes of the Crozon Peninsula, to the marshes and mountains of the Monts d’Arrée.

While they cannot really be called mountains, the Monts d’Arrée peaks form the highest hills in Brittany,with the tallest standing at some 385 metres. The wide horizons are filled with purple heathers and defiant mountain flowers, the maze of hiking tracks cutting invitingly through the landscape.

Reaching the highest point of the park is a popular challenge for hikers, and those who conquer the hills are rewarded with awe-inspiring views across to landmarks such as the bijou chapel of Saint-Michel de Brasparts.

Originally built in the 1670s, this simple chapelle was created for the peasants and farmhands who worked the slopes. The site, sitting at the top a peak close to the highest point, is unsurprisingly steeped in folklore, and it is said to have been home to a Celtic temple where pilgrims came to worship the sun.

Even today, this magical summit inspires worship and wonder, and there are a number of druids who have returned to dwell in the mountains round about. On occasion, there are even druidic ceremonies that are organised at the old shepherd’s chapel.

The legends of Finistère continue to be an important part of the area’s culture and tradition, and in most gift shops there are many and varied carvings and ornaments that depict the goblins and gremlins that allegedly inhabit the Monts d’Arrée. The peat marshes that sit under the protective gaze of Saint-Michel de Brasparts are also said to be home to the malicious fairies that terrorise any folk who venture into the moors at night. Far worse, though, to be met by the squeaking cart and shadowy figure of Ankou, the old man in black who traverses the lonely plains collecting unlucky souls.

When dawn appears, the spirits vanish and a new type of imagination and creativity arrives, for as important as the ancient legends are to the culture of Finistère, the area is also a haven for artists and artisans.

With its wild landscapes, quality of light and love of the arts, the area has long served as a magnet for those with an artistic inclination. Driving through the lanes of the department, you cannot go more than a few miles before you come across the atelier of a sculptor, painter or potter.

Many of these artists open their studios for visitors to see them at work, such as the glass-blowing workshop in Locronan, while others can be glimpsed through windows as they sit creating their latest piece of art. One of my favourite peering spots turned out to be at the window of Eric Jézéquel, whose workshop is on the attractive church square in Pont-Croix. Having been there for many years, his ceramics are utterly exquisite, with unique designs showcasing vibrant colours.

If you wish to see a number of craftsmen working on a variety of skills, a visit to the Maison des Vieux Métiers Vivants in Argol is in order. Open throughout the summer, and housed in charming farm buildings, this project is a gathering of more than 15 workshops showcasing the skills of basket-makers, potters, spinners, weavers, blacksmiths, wood-turners and even clog-makers.

Art galleries also abound in Finistère, and it is unlikely that you could spend the day by the coast and not see an artist setting up their easel, or a photographer, their tripod. Even in the depths of winter, there is an insatiable appetite to capture the beauty of the area on canvas.

Pont-Aven, just east of Concarneau, is particularly prolific in this regard, with a number of art galleries in the village. The historic tradition of art here goes back to the time when post-Impressionist painter Paul Gaugin lived in the village, and attracted a group of artists that came to be known as the Pont-Aven School. Some of their works are housed in the Musée des Beaux Arts, including examples by Émile Bernard, Paul Sérusier and Henry Moret.

Other museums of fine arts can be found in the glamorous historic city of Quimper, as well as in the more notorious port town of Brest, both of which are exceptional. The latter even has an art library, giving visitors the opportunity to borrow art to put up in their own homes.

For some, their home is indeed their canvas, especially for the many Brits who have settled in the department over the last few decades. With the desire to turn a Breton wreck into a dream home continuing strong, I spoke to Eric and Alice Murphy, who moved to the hamlet of Parcou, near the village of Plonévez-du-Faou, in 1992.

Hailing originally from Devon, the Murphys were invited over to neighbouring Morbihan by friends who had already moved to Brittany. Over the next couple of years, they fell in love with the space and peace that the area had to offer.

“We decided that if we were going to make the move, it would be a full-time permanent one, as we had two young children and wanted to offer them stability,” Alice says.

The old 18th-century house they bought was a complete wreck, and consisted of a stone house, a separate gîte and another old ruin. Slowly, they turned what they now call Ti ar Rederien into a beautiful home and chambres d’hôtes, helped by the fact that Eric is a stonemason by trade.

A keen horse rider, Alice wanted to be able to have space for animals, and although they don’t have a huge amount of land, their family now consists of chickens, miniature sheep from nearby Île d’Ouessant, two dogs, a cat and two horses.

“When I decided to buy the horses, I spoke to some local farmers who have small plots of land in the hamlet that they weren’t using,” Alice tells me. “There is so much land here, and it is not sought after in the same way it is in the UK. Here, I simply use a few small fields to grow crops for my animals, and in return the farmers don’t have to worry about maintaining them. Of course, this is a very informal arrangement, so if they ever wanted to use them, I would have to find somewhere else.

“We could tell that this is a wonderful place to bring up children,” Alice continues, “because there are so many activities for them to take part in and the affordability of water sports and horse riding just seemed better here.”

Indeed, the outdoor opportunities are unbeatable. The long bay that spills out from the Pointe de la Torche is a world-famous windsurfing destination, while surfers and stand-up paddlers enjoy long breakers in this exposed spot. Never more than an hour’s drive to the sea, any Finistère dweller can enjoy the freedom of deciding, at a moment’s notice, to head to the beach with surfboard, hiking boots or picnic in hand.

Fishing is also vital to the this part of the world, and one unique experience is to travel down to Le Guilvinec, at 5am or 4pm, to watch as the boats come back to the harbour, laden with langoustines and monkfish, as the gulls circle above. Although it is the third largest port in France, visitors are allowed to greet the boats, and watch as the buyers purchase the fish at the market.

As well as kayaking on the rivers inland, cycling is also popular here, with the coastline being flatter than you might expect, especially along the ocean roads, where you can enjoy large views of fishing villages, sandy beaches and open countryside.

In this respect, while Finistère might be affectionately dubbed by some as ‘the ‘end of the earth’, it could just be the beginning of the wildest of dreams.

Finistère Tourist Board www.finisterebrittany.comExplore the other Brittany departments: Morbihan Côtes d’Armor and Ille-et-Vilaine