Explore Corrèze in the Dordogne Valley 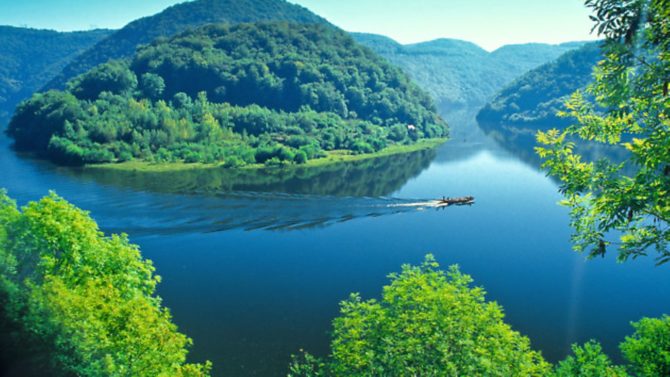 Hidden away in the rural heart of France, Corrèze in Limousin has slipped under many a visitor’s radar but it has much offer including wild nature, sleepy villages and picturesque towns

In France’s rural heartland, the region of Limousin has been largely overlooked by those wanting to settle in France, many of whom make a beeline for the southern reaches or the ever-popular Dordogne. But they are missing a treat. Corrèze, one of Limousin’s three departments, borders both Dordogne and Lot, and shares many of their charms: gastronomy, landscapes and quaint villages.

Limousin has the reputation of being rural and this is very much deserved, with a green blanket covering most of the department, interspersed with the instantly recognisable brown Limousin cows and only an average of 43 people per square kilometre.

Probably the most rural part of Corrèze is the Parc Naturel Régional de Millevaches en Limousin, which lies in the north of the department and also straddles the two other Limousin departments, Creuse and Haute-Vienne. The local wisdom is that ‘millevaches’ doesn’t mean a ‘thousand cows’ (although this would be entirely appropriate), but a ‘thousand springs’ as it is home to many water sources.

While exploring this corner of Corrèze, you would be much more likely to bump into one of the prized Limousin cows than a fellow human. However, if you travel south towards the border with Dordogne and Lot, you encounter unspoilt villages along the Vézère and Dordogne rivers and even a few bustling towns.

If quaint French villages appeal then you are in luck because there are no less than five of the ‘most beautiful villages of France’ in Corrèze. In fact, Les Plus Beaux Villages de France, the association which awards the classification of the same name, began life in Corrèze in the village of Collonges-la-Rouge. It was founded in 1982 by the mayor of the village, who felt it was his mission to help protect and promote the country’s picturesque villages. Since then the association has grown quickly and now counts 156 villages under its protection.

Of the five of these villages in Corrèze, Collonges-laRouge with its distinctive red buildings is probably the most well-known and the most visited, and for good reason. Explore out of season and you can’t help but be seduced by its tranquil atmosphere and warm red buildings.

Just 15 minutes down the road is Turenne, built high on a rocky outcrop and dominating the surroundings. From this village, the viscounts of Turenne ruled much of Limousin, Périgord and Quercy for almost 1,000 years. You can learn more about the history of the village and the viscounts at the Château de Turenne, and make sure you climb the worn steps of the 12th-century Tour César for spectacular views of the surrounding countryside and the village below. To really get a feel for the sleepy village though, take a leisurely stroll along its steep streets and enjoy an apéritif in the sun at one of the handful of restaurants on the Place de la Halle.

The third of the Plus Beaux Villages, in the south of Corrèze, is Curemonte, a medieval hilltop village with three towering châteaux. Curemonte’s claim to fame is that it provided sanctuary to the French writer Colette during the Second World War.

To discover the final two Plus Beaux Villages in Corrèze you will have to head north-west, first to Saint-Robert, built around a church high in the Corrèze hills, and then onto Ségur-le-Château, dotted with half-timbered noblemen’s houses built between the 15th and 18th centuries.

A less well-known village in the south of Corrèze is Aubazine, which grew around a monastery founded by the monk Saint Étienne in the 12th century. The village is home to pretty houses and a sunny square, which is great for people watching. Wander out of the village and you will find the monks’ canal, an impressive feat of engineering to divert water from the River Coyroux to the monastery, and now a pleasant afternoon walk among the trees. Talk to one of the guides in the tourist office and they will be delighted to tell you of their famous former resident Coco Chanel, who lived at an orphanage housed in the monastery for several years and learnt to sew during her time there. There is even a suggestion that she got inspiration for her famous logo from the stained glass windows in the church.

As well as Coco Chanel, Corrèze can count two French presidents among its famous sons. Both Jacques Chirac and François Hollande served as députés for Corrèze in the National Assembly before going on to be president, with Hollande mayor of Tulle for seven years.

For a museum with a difference head over to Sarran, on the edge of the Millevaches, to the Musée du Président Jacques Chirac, which houses many of the weird and wonderful gifts he received during his time as president. With exhibits ranging from a pair of cowboy boots to a tribal mask, the museum houses a truly bizarre collection of objects that has to be seen to be believed.

Although the administrative capital of Corrèze is Tulle, home to the last French accordion factory, the largest town is Brive-la-Gaillarde, tucked away in the south of the department near the Dordogne border. Brive-la-Gaillarde’s Saturday markets attract shoppers from miles around to haggle over local produce and meet friends for a gossip, while younger generations visit the shops and ice cream parlours to get their dose of city pleasures. The town is easily accessible: Brive airport is 16 kilometres south and the A20 autoroute passes to the west of the town.

Further north along the A20 is the medieval town of Uzerche, often referred to as the ‘pearl of Limousin’. Uzerche has been given the label of a Plus Beau Détour de France, a classification reserved for those larger towns and villages with a strong heritage. Perched on a tree-covered hill in a loop of the River Vézère, Uzerche is full of historic monuments, vibrant cafés, narrow winding streets and breathtaking views – it certainly lives up to the hype.

For those searching for a compromise between the hustle and bustle of Brive-la-Gaillarde and the sleepy, unspoilt villages scattered across the department, Uzerche is a good choice. There are a number of restaurants and shops selling local produce and a thriving social scene, including the annual Festival de Musique Classique d’Uzerche in August, a classical music festival set up by expat musician and composer Roger Steptoe who moved to the town 17 years ago. “In the early 1990s, I became involved in a property restoration project not far from where I now live in Uzerche,” he says. “I didn’t really know this part of France at all, but I decided I didn’t want to stay in London and I wanted a change, so I sold my house in Camden Town. Someone told me that Uzerche was a developing town and I bought a houuse in the old town. I’ve been here ever since.”

“I work in classical music and for my work I need space and privacy, and playing the piano in a terraced house in London was a problem. Here is ideal for me. Uzerche is also very practical for going to Paris and London, and I’ve been able to create the festival, which I wouldn’t be able to do in a larger place. I’m very happy here. I’ve noticed that a lot of French people have second homes in Uzerche, and in a lot of the villages, and I think that is a very good sign. A number of French people left the area 10-15 years ago because there wasn’t really any work but they are starting to come back. I think that is the greatest compliment for the department.”

One of Corrèze’s main selling points is being part of the much-visited Dordogne Valley. The River Dordogne passes through the south of the department and was once a vital transportation route carrying wood from the forests of Corrèze to Bordeaux and Libourne where they were used for oak wine barrels and vineyard stakes. One of the major ports on this route was Argentat, a beautiful village built on the banks of the river. Medieval houses with pale blue shutters line the river, while locals enjoy an evening drink on the quay as the sun sets over the bridge – this is Corrèze at its best. For those who prefer splendid rural isolation counterbalanced with a touch of vitality, the picturesque village of Argentat offers shops, a town hall and boules games in the park, yet you can walk from one end to the other in no time at all.

South of Argentat, the Dordogne Valley becomes more familiar to tourists, with the well-known attractions of Beaulieu-sur-Dordogne, Rocamadour and Sarlat-la-Canéda, but north of the village, the landscape grows ever wilder as you head into the Dordogne gorges. This area is popular with outdoorsy types who take to the water in kayaks or traditional gabarre boats, or follow one of the hiking routes along the top of the gorges. A great place to stop for a breather and to take some pictures is the Roc du Busatier viewpoint high above the river and away from all modern life. You will feel as if you are the only person in the world.

If you are looking for somewhere to admire nature, then Les Jardins Sothys, near Auriac in the Dordogne gorges, is a delightful stop. Built by Bernard Mas, founder of the Sothys cosmetics brand – which spa lovers will recognise – the gardens are designed to promote a sense of wellbeing and demonstrate the link between beauty and nature.

Another outdoor pursuit popular in Corrèze is horse riding – those interested in the equine world will enjoy Arnac-Pompadour in the north-west of Corrèze, home to one of France’s foremost national haras (stud farms). Established by Madame de Pompadour in the 18th century, the complex now has a château and stables open to visitors, as well as a racecourse, dressage arena and show jumping course which all host regular competitions.

It might be a rural department but there is plenty to interest visitors and residents alike in Corrèze, whether you are searching for a peaceful idyll, a picturesque village or a lively town. This is definitely not a place to be overlooked.