Buy a home in one of these French literary locations 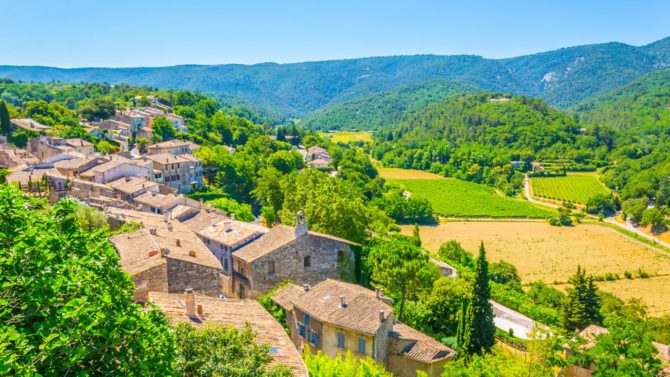 If you lust over French villages in the pages of a novel, what about the chance to live in one yourself?

One of France’s best-known adventure novels, The Count of Monte Cristo was written in 1844 by Alexandre Dumas, also author of The Three Musketeers. It takes place during the era of the Bourbon Restoration and tells the story of heroic Edmond Dantès, a young merchant sailor who is falsely accused by three of his friends, and is subsequently imprisoned on an island fortress. Through luck and ingenuity, Dantès embarks on a quest to seek revenge on the wrongdoers and restore his reputation as a good man, and finds extraordinary wealth in the process.

The story begins in Marseille, the sunny and bustling prefecture of Bouches-du-Rhône, and continues at the foreboding prison island of Château d’If, just off the coast. A decidedly more pleasant place to be banished to would be this charming villa in the heart of La Penne-sur-Huveaune, a pleasant town half an hour from Marseille. It has five large bedrooms, a beautiful garden with a pool and terraces, and an independent studio. It’s on the market for €880,000 with Leggett.

Chocolat, the 1999 novel by Joanne Harris, is beloved among Francophiles, as is the 2000 film adaptation starring Juliette Binoche. The story follows Vianne Rocher, a single mother with a gift for magic, who arrives in a small village to follow her dream of opening a chocolaterie. Despite the protests of the villagers, she gradually makes her place in the community with kindness, chocolate, and a little magic.

The novel is set in the fictional village of Lansquenet-sous-Tannes, described as a community of a few hundred people in Gers. Though Vianne’s village may not be real, there are dozens of beautiful communes in the department that might as well be straight out of the novel. Among them is Lavardens, where this delightful three-bedroom stone house has stunning castle views. It’s on the market for €158,000 with Compass Immobilier.

Another famous work set in France is Gustave Flaubert’s Madame Bovary, which was tried for obscenity following its publication in 1856. It follows dull local doctor Charles Bovary and his beautiful, discontented wife Emma, whose desire for romance and luxury leads her into a life of adultery and deceit. The notorious tale is set in a town near Rouen, Normandy, where Flaubert was born and grew up.

12km outside Rouen is the little town of Boos, which offers a school, pharmacy, garden centre and other amenities. It’s the location of this spacious five-bedroom home family home, which also comes with an attractive garden, large garage, cellar and outbuildings. It’s on the market for €299,000 with Sextant French Property.

When former advertising director Peter Mayle and his wife left the rat race for a 200-year old farmhouse in Provence, they were faced with a whole new set of challenges, from unexpected weather to adjusting to local customs. They also discovered a wonderful way of life, an eclectic community and the many offerings of the region. Peter recorded their first year in the farmhouse in his memoir A Year in Provence, which went on to be a bestseller and encouraged many others to make a move.

The book is set in the village of Menerbes, the location of the Mayles’ farmhouse, and you could own your own home in the very same village in the form of this lovely old farmhouse. Though it has 12th-century origins the property has been renovated into a stunning family home, with six bedrooms, huge living areas, over a hectare of land and beautiful views of the village. It’s on the market for €1.36m with Beaux Villages.