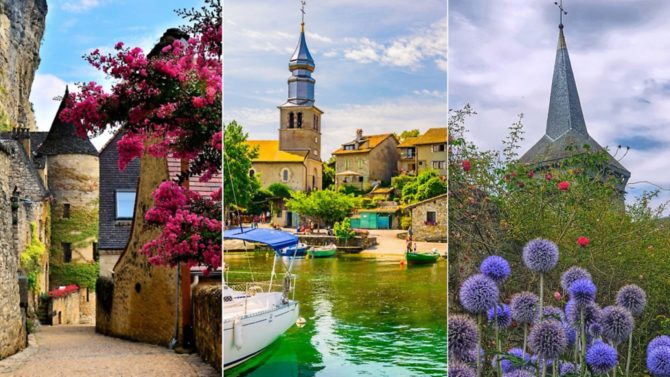 Looking for la vie en rose? No doubt you have heard of the Plus Beaux Villages label that lists the 159 villages recognised as the most beautiful in France.

You may also know of the Ministry of Culture’s Jardin Remarquable label which lists no fewer than 435 remarkable gardens in mainland France. But what happens when you go looking for beautiful villages with remarkable gardens? Here are seven gorgeous contenders along with details of average house prices.

If you want to see the famous Roses of Picardy as sung about in the eponymous WW1 song, there’s no better place than Gerberoy, home to not one but two Jardins Remarquables. This stunning community of flower-bedecked half-timbered cob and brick homes sits on a hill above the Oise countryside close to the Normandy border and less than two hours north of Paris. Don’t be fooled by the pretty façades though. Gerberoy has seen many conflicts over the centuries, not least between the ancient kingdoms of England and France and between William the Conqueror and his own son. But its fortunes changes in 1901 when the Post-Impressionist painter Henri le Sidaner moved in and began reviving the village. He created magnificent Italian gardens in the grounds of the ruined château and draped the houses in wisteria, hydrangeas, clematis and, of course, roses, establishing a rose festival that continues to this day. As well as the Jardins le Sidaner, Gerberoy also has the remarkable Jardin des Ifs, a terraced garden of sculpted boxwood and yews, one of which is 300-year-old.

Standing guard on a rocky spur at one of the gateways to Provence, the fortified village of La-Garde-Adhémar dazzles in the sun thanks to its medieval white stone façades and ramparts. The perfectly preserved medieval community has a pedestrianised centre of narrow streets and cobbled passageways wending their way up to the church of St-Michael with its beautiful octagonal belltower. From here, you can look out over the mountains of Vivarais and the wine-producing Rhône Valley. Just next to the church is the remarkable Jardin des Herbes, a terraced garden with fabulous views and more than 200 species of medicinal and aromatic plants. Breathe it all in and you’ll truly feel like you have arrived in Provence!

One of the most breathtaking sights of the Périgord Noir, La-Roque-Gageac is built into a south-facing cliff face and reflected in the waters of the River Dordogne. The golden village, with its famous steep lauze roofs, is at the centre of a cluster of Plus Beaux Villages with Domme just a few kilometres upstream and Castelnaud-la-Chapelle and Beynac-et-Cazenac a short paddle downstream. Thanks to its sunny and sheltered position, the village enjoys a microclimate and you can see exotic plants such as exotic plants such as banana trees, agaves and cactus in the garden near the church. The remarkable boxwood gardens of Marqueyssac, overhanging the valley, are officially in the next-door commune of Vézac. But most visitors arrive via La Roque-Gageac whether by car, foot, canoe or gabarre (one of the flat-bottomed boats that carried goods in the 19th-century and now carry tourists). Castelnaud-la-Chapelle also has a Jardin Remarquable, in the grounds of the Château des Milandes. This is not the main fortress in the village but one just round a bend in the river and was home to the American entertainer Josephine Baker during the Second World War.

The prettiest houses for sale in France right now

Quiz: How well do you know France’s most beautiful villages?

Most people have heard of Giverny, the Normandy home and elaborate gardens of Claude Monet where he produced his famous water lilly paintings. Not so many people know La Roche-Guyon, a beautiful garden village less than 10km to the east. Situated at the very edge of the Greater Paris region, about 1h20 from the heart of the capital, the village sits with its back against a chalk cliff on a meander of the Seine, just across the river from the much pricier department of Yvelines. In the 4th century, only cave dwellers lived her but today the community is recognisabe by its imposing château, which was frequented by the kings of France, intellectuals of the Enlightenment and German troops during the Second World War. Laid out before the château in a decorative grid pattern is a remarkable kitchen garden and fruit orchard (Le Potager du château de la Roche-Guyon) planted in the 1700s and restored in 2004.

Slap-bang in the heart of France an hour from the city of Bourges and close to the confluence of the Allier and Loire rivers is the idyllic village of Apremont-sur-Allier. It owes its prosperity to the medieval quarrymen who transported locally cut stone by barge to build the Orléans cathedral and the Abbey of St-Benoît-sur-Loire. Its uniform beauty, meanwhile, is thanks to a local French industrialist who renovated the village during the interwar years, pulling down homes not typical of the Berry region and replacing them with those built in the local medieval style. As its name suggests, Apremont is a riverside village and also has a handsome château, but it’s the remarkable Parc Floral, opened in 1976, that will delight plant enthusiasts. Inspired by the English garden of writer Vita Sackville-West at Sissinghurst, the garden has an international feel with plants from all over the world and features such as a pagoda bridge, waterfall, Turkish pavillion and archway scented with Chinese and Japanese wisteria.

Yvoire is known as the Pearl of the Léman – Léman being the French name for Lake Geneva. Hugging the shores of the beautiful lake, the flowery fortified village really does enjoy the best of all worlds. It’s a mere hour’s drive from Geneva airport and even less from the buzzing Swiss city itself, yet it’s a compact and super attractive village with fabulous views. In winter, you can drive in less than an hour into the vast Portes-du-Soleil ski area to resorts such as Morzine, Les Gets and Châtel. In the summer you can swim in the lake, take a cruise or visit other gems of the Léman such as the popular spa town of Evian-les-Bains. And then there’s the château with its old kitchen garden. This is the much-loved Jardin des Cinq Sens, a plant labyrinth on the theme of the five senses, with deep blue clematis to behold, pineapple sage to inhale and homemade jams to taste, for example. Dive right in!

Last but not least is our Riviera offering – the beautiful Mediterranean village of Gassin. High on a rocky hill on the St-Tropez peninsula, the village has fabulous views over vineyards, woodland, the glittering waters of the Côte d’Azur and the distant Alps. Property is not cheap, but it’s a good deal less expensive than the next-door glitzy resort of St-Tropez, France’s priciest town, where the average home is an eye-watering €1.965m. It also has a more tranquil laid-back feel with winding streets and historic pastel-coloured houses bursting with Mediterranean flowers. Plant lovers will particularly enjoy the private botanical garden established by the artist Germaine L’Hardy-Denonain after she settled in the village in 1929 and now tended by her daughter Marie-Thérèse. Featuring some 600 Mediterranean species including the black mulberry and Provençal cypress, the garden is private but is open every day for free visit in the summer.