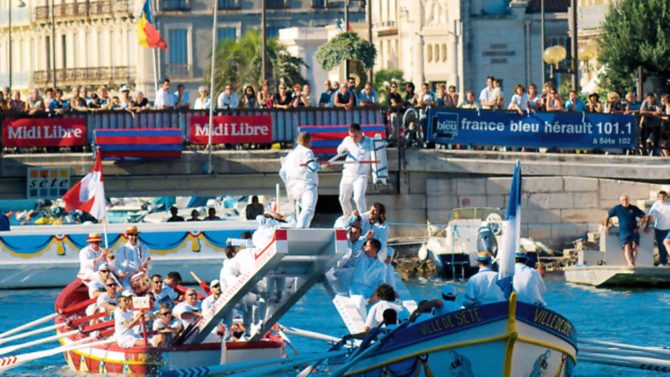 Discover 10 events happening in France in August 2015, including several music festivals, a celebration of champagne and Breton culture, plus a water jousting festival

More than 200,000 people meet each year in the small village of Marciac in the Midi-Pyrénées region for a fortnight of concerts during the legendary Jazz in Marciac festival. Renowned for its atmospheric performances, this year the festival runs from 27 July until 16 August and welcomes big name acts as well as new and upcoming artists. The concerts take place in a giant marquee or in the Astrada concert hall, and there is also a fringe festival in front of the town hall in the main square. Ticket prices start from €30 for adults, while the fringe concerts are free.

Rock music fills the air in the Parc de Saint-Cloud on the banks of the River Seine just outside Paris in the annual Rock en Seine festival. Taking place this summer from 28 July to 10 August, the festival attracts big name acts – the 2015 line-up includes Stereophonics, Kasabian and Chemical Brothers. For the younger generation there is a mini festival with gigs, workshops and animations for those aged between six and 10 years old. Festival-goers can camp on-site – prices start from €60 for three nights, while day passes start from €49.

It might be located at ‘the end of the world’ on the Crozon peninsula in Brittany’s Finistère department, but the Festival du Bout du Monde brings together music from all over the world. Performing over three days from 31 July to 2 August, the line-up this year includes music from destinations as varied as Jamaica, Brazil and Ukraine as well as local acts. The festival is held in a stunning location in the Parc Naturel Régional d’Armorique, with the Breton coastline as a backdrop. A day pass costs €33.

Taking place in Les Riceys, the biggest wine-producing area of Champagne-Ardenne, La Route du Champagne en Fête is a celebration of the region’s world-famous drink. It gives visitors the opportunity to meet vignerons and find out about the wine-making process, visit the local villages, and sample the area’s finest champagnes. Taking place on the weekend of 1-2 August, the event guides visitors through the area’s three winemaking appellations – Champagne, Coteaux Champenois, Rosé des Riceys. For €20, visitors get a route map, a glass and holder, and breathalyser kit.

The Lautrec area in Tarn is home to France’s famous pink garlic, which is celebrated every year on the first Friday of August, during the Fête de l’Ail Rose. This year taking place on 7 August, the fête has competitions to find the best work of art made from pink garlic, an opportunity to taste the traditional pink garlic soup, a competition for the best pink garlic tart, as well as a competition to see which team of garlic producers who can create the longest bunch of pink garlic in three hours. The equivalent monetary value of the record bunch is donated to a charitable organisation.

A celebration of Breton music and culture, the Festival Interceltique de Lorientbrings together artists not just from Brittany, but from Scotland, Wales, Cornwall, the Isle of man and Ireland, as well as the north of Spain. taking place from 7-16 August, the festival welcomes some 4,500 musicians, singers, dancers, filmmakers and visual artists, and draws 700,000 visitors during the 10-day event. there are music workshops, daily parades, bagpipe competitions and many free concerts and performances. On Sunday 9 August, musicians and dancers take part in the grand Parade of Celtic nations in a colourful display of Breton culture.

Taking place from 7-16 August, the Foire aux Vins d’Alsaceis a major event for the Alsace wine industry, welcoming both professionals and wine-lovers alike. The wine fair brings together wine-producers, cooperatives, union committee members as well as members of the public who enjoy meeting producers and taking part in expert wine tastings. Visitors can also take indance performances and musical concerts which take place in an open-air theatre.

Now in its 30th edition, the Festival d’Aurillac sees over 400 companies taking over the streets of Aurillac in Auvergne with performances of street theatre. Running from 19-22 August, the festival hosts a wide and eclectic range of events including plays, puppet shows, performance art, circus spectacles, dance, poetry… There are also spontaneous street performances to enjoy.

Sète’s first Fête de Saint-Louis waterjousting event was held nearly 350 years ago, in Languedoc-Roussillon’s Hérault department. Today, competitors continue to take to the canal to joust, with this year’s event running from 21-25 August. The overall winner not only claims the glory, but also goes down in history with their name engraved on a shield in Musée Paul Valéry.

After the excitement of the Tour de France, attention now turns to the south-west of France with the annual Tour du Poitou-Charentes. Attracting professional cyclists – British favourite Mark Cavendish won two stages of the race last year – the race takes place from 25-28 August, starting in Rochefort on the coast and finishing in Poitiers further inland.

www.tour-poitou-charentes.comVisiting in July? Here are some key events in France in July