9 festive events in France in December 2015 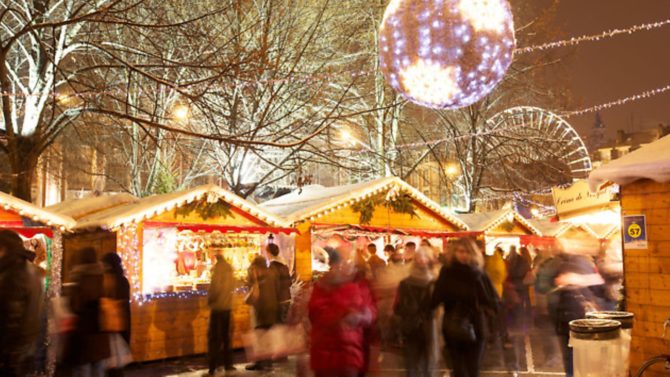 In Lille, the Place Rihour will become a Christmas village from 18 November to 30 December with 83 charming chalets showcasing the work of local craftsmen and producers. Specialities to be enjoyed include gauffres liègoises and gingerbread; plus foie gras, fromage de Savoie and traditional mulled wine

In Mulhouse, the marché de Noël will take place in the Place de la Réunion, from 21 November to 23 December. Around 100 wooden huts will be laden with presents, decorations and delicacies including foie gras and bredeles biscuits.

In Toulouse, the Place du Capitole will be a maze of pretty white chalets as the city gets into festive mood with the annual Christmas market. For a month from 27 November to 27 December, shoppers flock to the stalls packed with gifts and regional produce.

In the run up to Christmas, for more than 200 years, people have flocked to Marseille for the annual Foire aux Santons, which this year runs from 29 November to 31 December in Place Charles de Gaulle. Their mission is to buy the small, hand-carved or pottery figures, the santons, which make up the traditional nativity scene. Fairs like this are replicated across Provence with Marseille laying claim to being the oldest in the region. The fair opens to the sound of tambourines and traditional folk music, following a mass in the Église Saint-Vincent-de-Paul in the city centre.

Parades, processions and fireworks are the hallmark of La Fête de Saint-Nicolas, which is celebrated in fine style in the towns and villages of Alsace and Lorraine. In Nancy, capital of Lorraine, three days of celebrations begin on 4 December culminating with a feast day on 6 December, which is held to commemorate the death of the patron saint of lawyers, seamen and school children. The city sparkles with light as carnival floats head to Place Stanislas where the Christmas market is in full swing. With the scent of gingerbread and mulled wine on the night air, the festivities also include street theatre and live music.

A festive celebration of champagne, its culture and traditions takes place every year from Friday 11 December to Sunday 13 December in Épernay, self-proclaimed capitale du champagne and home to some of the word’s most prestigious champagne houses. This year, Habits de Lumière includes cookery demonstrations, champagne tastings, fireworks and a vintage car parade. Nearly 30,000 people are expected to attend the event, which sees champagne houses, such as Moët et Chandon and Mercier, throw open their gates to revellers.

Celebrations to honour the humble turkey completely transform the town of Licques in Pas-de-Calais for three days in December. Held from 12-13 December, the Fête de la Dinde begins with a competition in which the breeders of the best turkeys, guinea fowl and capons are rewarded for their efforts. A Christmas market of regional produce runs throughout the weekend, and on the Saturday night, revellers gather for a meal and dancing. On Sunday, the Confrérie de l’Ordre de la Dinde guides a procession of turkeys around the town before more celebrations and food are enjoyed in the town square. The festival attracts thousands of visitors and around 2,000 meals are served in two days.

Fancy a festive dip this year? Join Father Christmas for a plunge in the Mediterranean at the annual Bain de Noël. Head for Valras beach, near Béziers, on 19 December, at 11am, where the water will be about 15°C; chilly but refreshing! If you can’t face getting into the water, watch from a warm vantage point with a vin chaud.

The City of Light is transformed in December into a vast, magical fairyland. The festive excitement is impossible to resist, and everywhere you turn there is something to get you into the spirit of Christmas. The square in front of the Hôtel de ville is transformed into a giant ice rink, and skaters of all ages and abilities can skate here to their heart’s content for three months, from December to March. at the Christmas market in the Champs-Élysées, shoppers stroll through prettily decorated wooden chalets packed with decorations, presents, gourmet food products, and arts and crafts. The beautiful nativity scenes at Notre-Dame cathedral, l’Église de la Madeleine and Sacré-Cœur are worth a visit as are the dazzling window displays and decorations at department stores: Galleries Lafayette (pictured), Printemps and Le Bon Marché.