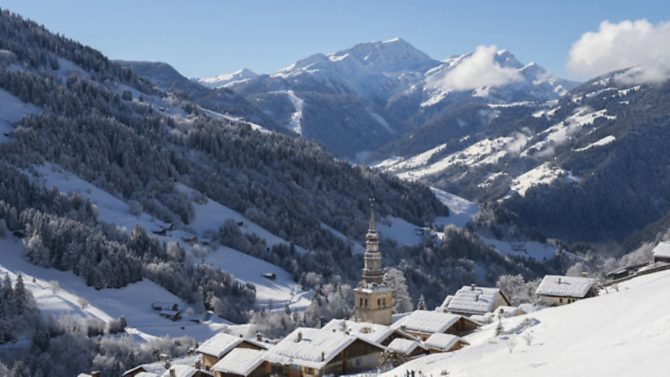 It’s not just ski lifts and slopes in the French mountains, the traditional villages tucked away among the summits are well-worth a visit if you’re looking for traditional chalets, cute churches and cosy mountain restaurants. Here are 17 of our favourite.

A post shared by Abondance_Portesdusoleil (@abondance_frenchalps) on Mar 21, 2016 at 6:29am PDT

Home to the cheese named after it, the village of Abondance dates back to the early 12th century and the pretty Notre-Dame d’Abondance church or the gothic cloister testify to the village’s history. Now a ski resort with excellent access to the Portes du Soleil slopes, Abondance is a truly traditional alpine village with plenty to do and see.

With the Meije mountain range as a spectacular backdrop, this charming village is one of France’s Plus Beau Village. You won’t find wooden chalets, the houses here are sturdy and built in stone, the narrow spaces between them forming winding streets. The authentic village has only local shops and small, comfortable hotels.

Tucked away in the Vallée de la Maurienne, Aussois has kept an authentic feeling while developing into a family-friendly ski resort. With 700 inhabitants, the town is quiet, the friendly villagers keeping their traditions close to their hearts. Old bread ovens, fountains and lavoirs are dotted around the village, giving you the impression you’ve stepped back in time.

Another alpine town that gave its name to a famous cheese, Beaufort is a charming village with notable natural and cultural heritage, including charming old buildings such as a former forge, an imperial police station and an old bakery. Located in the heart of the Beaufortain mountain range, the town is set on the Arêches-Beaufort ski resort.

Perched at the foot of Mont Canigou, the quaint village of Vernet-les-Bains is a renowned spa town since the 19th century. The old castle surveys the old town which boasts pretty colourful houses that are a joy to wander by.

Another Plus Beau Village, Bonneval-sur-Arc is nestled at the foot of the Col de l’Iseran in the Vanoise national park. The stone houses, whose traditional architecture has been completely preserved, are famous for their thick-slated roofs. Surrounded by incredible mountain views, the villages is an insight into what mountain life used to be like.

Facing the Mont Valier in the heart of the Pyrénées Ariègeoises national park, Guzet is quiet village where picturesque chalets are lost in the dark green pine tree forest. The village is also a ski resort and offers 40km of slopes boasting breathtaking views of the Pyrénées.

With only 300 inhabitants, Vaujany is a little gem of a mountain village facing the Massif des Grandes Rousses. With little winding streets, the village has a real mountain feel to it as it is surrounded by stunning landscapes. It also has an amazing ice rink which is partly built underground.

Morzine became a ski resort in the 1930s but has managed to retain its authentic and traditional alpine character, including charming wooden chalet with slated roofs. Enjoying a great central position within the Portes du Soleil resort, the village is concentrated in a small area and has a friendly and cosy atmosphere.

Why France is the best place to ski in the world

When do French ski resorts open?

Set within a valley surrounded by Pyrenean peeks, Les Angles upholds its medieval heritage thanks to the little church of Sainte-Marie de Vallsera or even an old medieval castle in town. The ski resort offers 55km of slopes, accessible to all levels and within the breathtaking natural park.

Composed of several charming hamlets, each with traditional alpine chalets and pretty chapels, Hauteluce is a bit of a hidden treasure, even though it boasts an unparalleled view of Mont Blanc. The valley is said to be one of the prettiest in the Alps and certainly boasts an unspoilt natural environment.

Dotted with 18th and 19th century chalets, this cute mountain hamlet, an ancient farming village, is actually listed as a historical monument in France. Hugged by a forest of larch trees, the village has a breathtaking panorama on the Mont Pourri and its glaciers.

Located at an altitude of 2042m, Saint Véran is considered to be the highest inhabited village in Europe and because of that, has incredible views of the Queyras regional park. With its old wooden or stone chalets, slate roofs, bread ovens, fountains, sundials and quaint chapels, it is a quintessential French mountains village to visit.

Completely cut off from civilisation until the arrival of electricity in the 1950s, this pretty village has remained unchanged and unharmed by modern urbanisation. As such, only traditional chalets with thick-slated roofs and distinctive pink walls have been allowed to be built.

Although it has an odd name, this Plus Beau Village de France is located on a nature reserve and offers exceptional natural heritage sites, such as the Cirque du Fer à Cheval or the Cascade du Rouget waterfall. Wander around town and spot the pretty chapels, fountains, crosses and carved doors.

Made famous by the spectacular Cirque de Gavarnie, a UNESCO listed natural site in the Pyreneas, the village of Gavarnie is well-known to hikers taking on the Camino de Santiago pilgrimage route. Perched at an altitude of 1400m, the village is nestled in a breathtaking natural setting.

This traditional little village is tucked away beneath the Aravis pass and benefits from unparalleled views of the Mont Blanc and Aravis ranges. It’s surrounded by tall spruce trees and bucolic mountain pastures, but the church and the village museum are well worth a visit too.