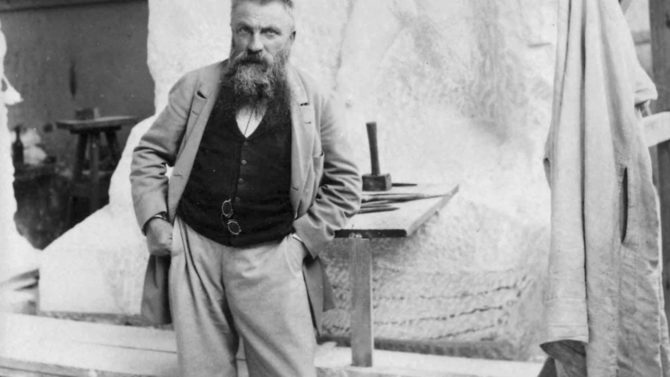 As Paris marks 100 years since Rodin’s death, we look back at an artist who rebelled against idealised forms of art and instead introduced innovative methods that inspired the modern era

Auguste Rodin is considered by many to be the ‘father of modern sculpture’. Despite a traditional schooling, he was anything but conventional in his work; he eschewed classical themes to produce such famous sculptures as The Kiss, The Age of Bronze and The Thinker, all of which modelled the human body with realism and celebrated individual character. Often criticised during his lifetime, Rodin refused to alter his style and instead built a world-class reputation that still lives on today.

François-Auguste-René Rodin was born into a working-class family in Paris on 12 November, 1840. He was largely self-educated, and by the age of ten had developed a love of drawing, which he pursued as a student at the Petite École from the ages of 14 to 17.

The aspiring artist received little encouragement from his peers and tutors, and was bitterly disappointed to be refused admission to the prestigious École des Beaux-Arts in 1857, the first of three such rejections. For much of the next two decades, Rodin worked as a craftsman, producing decorative objects at a time when Paris was undergoing significant urban renewal.

In 1864 Rodin met his lifelong companion, the seamstress Rose Beuret, with whom he had a son, Eugène. By then, he had completed his first major sculpture, Mask of the Man with the Broken Nose, an unconventional bronze, with the head broken off at the neck, and a flattened, crooked nose. The work’s departure from the ideal of classical beauty was too much for the Paris Salon, which rejected it twice.

Also in 1864, Rodin went to work for fellow sculptor Albert-Ernest Carrier-Belleuse and spent six years in Brussels on a project involving decorative objects for the stock exchange. During this time, Rodin displayed a number of his pieces in salons and saved enough money to travel to Italy in 1875 where the expressive works of Donatello and Michelangelo had a profound effect on him.

The Musée Rodin in Paris reopens

The inspired artist returned to Belgium and in 1876 completed The Age of Bronze before moving back to Paris the following year. Drawing on Michelangelo’s Dying Slave, the work depicts a life-size male figure clenching his fists whose form was so realistic that it led to accusations of surmoulage – taking a cast from a living model.

The following decade, when Rodin was in his 40s, that he really began to be successful, creating an array of acclaimed (and sometimes controversial) works which favoured suppleness of form over academic formality.

In 1880 he was commissioned to create a portal for a planned museum of decorative arts and would spend the last four decades of his life on the Gates of Hell, inspired by Dante’s Divine Comedy. This monumental, unfinished work featured a number of figures that became sculptures in themselves, including The Thinker (conceived in 1880), The Three Shades (1886), and The Kiss (1889).

In 1883, Rodin supervised a course for the sculptor Alfred Boucher and met his future muse, the 18-year-old Camille Claudel. The pair embarked on a tumultuous love affair, with Claudel, a talented sculptress in her own right, being the model for a number of his figures.

Despite being preoccupied with The Gates of Hell, Rodin did win other commissions, including The Burghers of Calais, dedicated to the six citizens who protected the town during the Hundred Years War. He began work on the two-ton monument in 1884, but it was not officially unveiled in Calais until 1895.

Rodin spent the ensuing years producing sculptures for high-profile clients, including monuments to literary figures such as Victor Hugo and Honoré de Balzac. In January 1917 Rodin finally married Rose, his partner of 53 years, two weeks before her death. Rodin died on 17 November in the same year, in Meudon near Paris, aged 77.

There are a number of exhibitions marking the centenary of Rodin’s death. Here is our pick:

This brand new exhibition focuses on a fictional encounter between two great artists and how each one has influenced the people of their era. The contemporary artist featuring in this unique exhibition is 72-year-old, Anselm Kiefer, from Germany, who visited the museum’s reserve collection of Rodin’s sculptures in 2013 to find inspiration for his own works. Highlights of the display will include a series of previously unseen glass cases by Kiefer and casts by Rodin that have never come out of storage. musee-rodin.fr

To mark the centenary of Rodin’s death, the Musée Rodin in Paris has joined forces with a number of other museums to explore Rodin’s creative genius, his relationship with the public and how other artists have learnt from his approach to aesthetics. The exhibition is being held at the Grand Palais and will feature more than 200 different works by the master of sculpture, as well as sketches and sculptures by other iconic figures such as Bourdelle, Picasso, Matisse and Giacometti. grandpalais.fr

Drawing on works by Rodin and a host of other artists including Marc Chagall, Jacques Monory and Douglas Gordon, this original exhibition focuses on how the image of the kiss has evolved since it was first captured by Rodin in 1882. Importantly, the exhibition seeks to explore the role of the kiss as a communicative expression, a sort of language between two people, and how this everyday action has been influenced by society in the past, how it is considered today and how it will be viewed in the future. calais.fr