The Lost Chapter: A new novel set in the city of Lyon 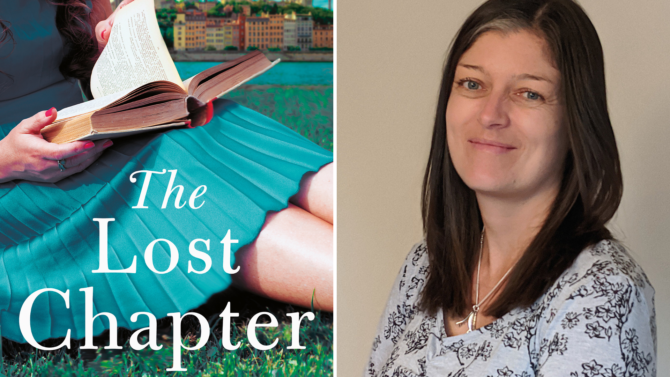 How would you sum up The Lost Chapter?
The Lost Chapter is a story about female friendship which centres on Flo and Lilli, who meet at finishing school in Lyon in 1957 and become unlikely friends, until a terrible betrayal tears them apart. More than 60 years later, Flo, now aged 80, comes across a novella written by Lilli which is based on their time at the school. As she reads the book, Flo is forced to relive some harrowing events from the past. In order to make peace with what happened back then, she decides to go on a road trip to France to find Lilli, taking along two travelling companions who both have troubles of their own.

What inspired you to write it?
I live in Lausanne, Switzerland, where there used to be many finishing schools. I’ve always been fascinated by the concept of finishing schools and what that says about society’s attitudes to women over the years, so I thought it would be interesting to explore that in a novel. The Lost Chapter portrays how these attitudes have changed – and haven’t – since the 1950s.

Why did you choose Lyon as the setting?
There used to be finishing schools in France as well as Switzerland, though mainly in Paris. However, I chose to locate my fictional school in Lyon because I lived there for a year as part of my French degree, and l loved it. It’s such an impressive and atmospheric city which certainly made an impression on me as a student, when I was only a couple of years older than the schoolgirls in my novel. Also, since I was writing during the pandemic and knew I might not be able to easily travel for a research trip, it felt important to set my story in a place I knew well.

What did you most enjoy about living in Lyon as a student?
It’s such a beautiful city, with its two rivers, the pink stone houses and the mysterious traboules of the Old Town, and of course all the wonderful restaurants and bouchons. One of my favourite Lyonnais experiences of that year was celebrating Beaujolais Nouveau day in a little café in a suburb – a very raucous, hilarious evening that has inspired a scene in my novel.

Do you have a favourite place in France?
I’ve spent a lot of time in the Gironde département and that landscape – the vineyards, the rolling hills, the old windmills and the big skies – just represents summer holidays to me.

If you could live anywhere in France, where would it be?
Probably somewhere on the coast. I love living in Switzerland but, given it’s a landlocked country, I do miss the sea. Perhaps Biarritz or somewhere on the south-west coast.

The Lost Chapter is your second novel, do you have plans for any more? If so, will you use France as a setting again?
I’d like to keep writing as long as I have the ideas and the motivation! My debut novel, The Other Daughter, is set in Switzerland, and I’m currently writing a third, which isn’t set in France either, but I’m sure I’ll use the country as a setting again in the future – it’s a good excuse to go there on a research trip!
The Lost Chapter will be published in paperback on 3 February 2022

Previous Article Book Competition: Win a copy of Fresh Water for Flowers by Valérie Perrin
Next Article Video: Answers to your questions on moving to France