What do these 8 French place names really mean? 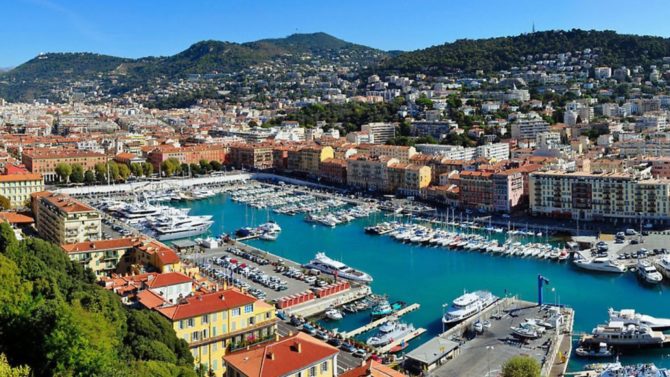 What’s in a name? A lot, it turns out. Find out the fascinating stories behind the names of these places in France featuring dragons, gods and Sardinian kings.

Where better to start our etymological odyssey than the capital? You might have thought that, like many French cities, Paris took its name from a mythological figure. But no, we have to head back to 3 BC to the age of the Parisii: a Celtic Iron Age people who lived on the banks of the Seine, where present-day Paris now sprawls.

Legend has it that this Provençal city got its name, derived from the Latin for dragon ‘draco’, after a bishop called Saint Hermentaire slayed one of the fire-breathing beasts that terrorised pilgrims on their way to Lérins Abbey. Nowadays you’re more likely to get scalded by the glorious Mediterranean sunshine.

Calvados was named after some distinctive rocks off the Normandy coast – but where did these rocks get their name from? There are two options, the most likely of which being that it derives from ‘calva dorsa’, Latin for ‘bare rocks’, as there was not much vegetation on the rocks. But another suggestion is that it comes from the Salvador, a ship from the Spanish Armada that sank near the rocks in the 16th century.

As the first purpose-built ski resort in France, giving Courchevel an inviting name was crucial. The options were narrowed down to Les Tovets and Courchevel, with the latter being chosen for its marketability. Courchevel was originally the name of an old hamlet in the area. According to author David Déréani, the name is a combination of the old French ‘escorchier’ (‘écorcher’ – to skin or catch) and ‘vé’ (‘veau’ – veal or calf).

The glittering seaside city we all know and love would have looked very different when it was founded in 350 BC. It was given the name Nikaia in honour of a victory over the Ligurians by its settlers, the Greeks of Massalia (Marseille). Nikaia is derived from Nike, the Greek goddess of victory.

The host of the 1992 Winter Olympics owes its name to King Charles Albert of Sardinia, who merged the towns of Conflans and L’Hôpital to form the present day commune. The King lived in France during the Napoleonic period and was known as the ‘Italian Hamlet’ due to his ‘gloomy, hesitant and enigmatic character’.

Although its origins are disputed, many believe Versailles to come from the Latin word ‘versare’, which means to keep turning. This is a medieval term referring to ploughed lands, where the soil has been turned over and over. Quite the contrast to the grand Palais and its perfectly-manicured grounds!

You might think Lyon is somehow related to lion but the city, originally named Lugdunum when it was founded in 43 BC, takes its name from a god. Not a Greek or Roman god, mind, but a Celtic one: Lugus, god of law and skills. Lugus has been commemorated in many other place names including Luton in England, Lothian in Scotland and Leiden in the Netherlands.

Want to find out more about French place names? Check out these towns and villages with hilarious names!