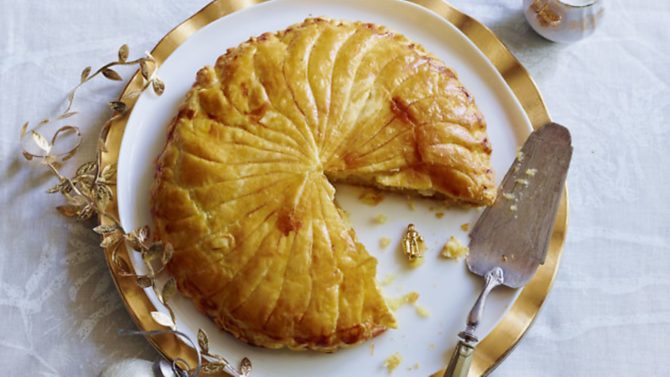 The galette des Rois or ‘king cake’ is traditionally served at the feast of the Epiphany on 6 January to celebrate the arrival of the kings in Bethlehem. In northern parts of France, the cake consists of two layers of puff pastry baked with a layer of almond frangipani in between, but in Provence it is usually a brioche-type ring cake studded with candied fruits. Both cakes have a fève baked inside. This was originally a bean – fève being the French word for broad bean – but then evolved to become a porcelain or metal king or nativity figure, called a santon. La fabophilie is a popular hobby involving the collection of rare or old fèves. These days, the fève is more often of a cartoon figure in plastic or porcelain, and change each year.

The tradition goes that all the family gather round the table with the cake in the centre. The youngest child goes under the table and calls out the names of those gathered in turn as the slices are cut and distributed. Whoever gets the fève becomes king for the day and wears a gold paper crown that is given out by the boulangerie with each cake. The family usually ensures that a child wins to make life easy! In some traditions, the cake is baked with both figure and bean, and whoever gets the bean must buy the next cake.

The tradition of serving this delicious cake on Twelfth Night has been somewhat stretched in recent years and bakers start selling them from early December until the end of January, and they are served at pretty much every festive gathering. The president of France is presented with a huge galette des Rois each year but the only difference is that this one never contains a king – after all the French got rid of one king and don’t want to take any chances of getting another!

If you want to make this in advance, it freezes well, uncooked, as long as you use pastry that has not been pre-frozen. It is a simple cake to make and if you want to carry on the tradition, perhaps you could add a dried bean or small coin wrapped in paper to the filling, and make a paper crown with gold wrapping paper.

• A little beaten egg, for brushing

1. Heat the oven to 200°C/fan 180°C/Gas 6. Beat together the butter and sugar until light and fluffy, about 2 mins. Beat in the egg, then stir in the ground almonds, and cognac or rum, if using. Set aside while you prepare the pastry case.

2. Cut the pastry in half, then roll out each piece to a 25cm round. A cake or flan tin makes a good guide. Put one round on a baking sheet lined with baking paper, then spread with jam to within 2cm of the edge of the pastry.

4. Bake for 25-30 mins until the pastry is crisp and golden brown. Serve warm or cold, cut into slices.

Looking for ideas for desserts? Try our recipes for mousse au chocolat or tarte Tatin