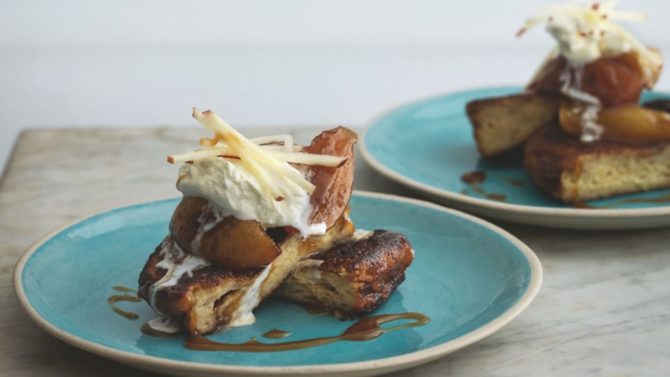 Michel Roux Jr is one of the best-known French chefs in Britain. He runs the renowned two-Michelin star restaurant Le Gavroche in London, as well as a number of other restaurants and has presented many popular food programmes on TV.

In his latest cookbook, The French Revolution, Michel revisits the classic dishes from his traditional French upbringing, but takes a modern approach that adapts his favourite recipes to suit home cooks who are looking for light and easy-to-make options.

About his recipe for Pain Perdu à la Normande he says: “Sometimes you need a pudding that is unashamedly luxurious and this is it. However, it does use up stale bread and it’s quick to make for a once-in-a-while treat.”

Mix the egg, milk and cinnamon with a tablespoon of the sugar in a bowl. Dunk the slices of bread into this mixture to moisten them.

Heat a tablespoon of the butter in a pan. Take the slices of bread out of the milk mixture and place them in the hot pan with the butter.

Brown the bread on both sides, then add a tablespoon of sugar to the pan and another tablespoon of butter to caramelise. Take the slices of bread out and set them aside.

Cut one-and-a-half of the apples into wedges – no need to peel them. Heat the rest of the butter and sugar in the pan and fry the apples until they are just cooked and browned. Add a good splash of Calvados and then set the pan aside.

Whisk the cream with the icing sugar. Cut the remaining apple half into thin matchsticks.

Divide the warm apples between the slices of bread, spoon on some cream and sprinkle a few strips of raw apple on top. Serve at once!

Previous Article These French houses are all on the market for €100,000
Next Article Taking tourism online: You can now attend a wine tasting via Zoom