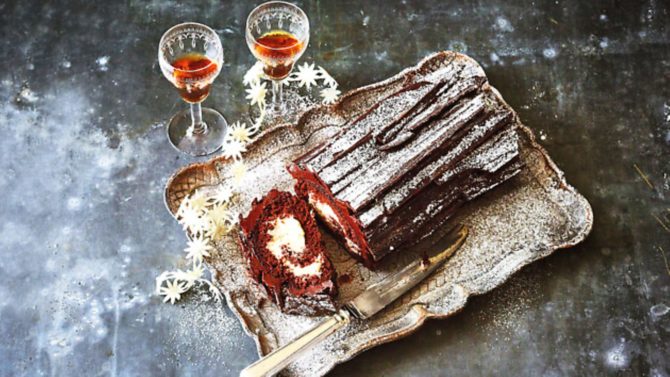 One of the dishes that springs to mind when thinking about Christmas in France is the bûche de Noël.

The history of this gâteau is steeped in myth and predates medieval times. In order to welcome in the winter solstice signalling the end of winter and the beginning of spring, people would gather to celebrate by burning logs decorated with holly and berries. The ashes were believed to hold medicinal qualities and protect people from evil spirits.

Remarkably the tradition survived through the ages becoming more elaborate and it was eventually transformed into the cake that we know and love today, and that was first noted in France in 1879. At the time, it was certainly considered the Christmas dessert.

There are so many different versions of bûche de Noël. It is a chocolate genoise sponge or roulade filled with cream, which is rolled into a log and covered with chocolate ganache, and decorated in many different ways to resemble the original log.

The chocolate sponge can be filled with flavoured cream and the decorations vary from a simple frosting to chocolate bark and even piped meringue mushrooms and marzipan holly leaves. I like to use chestnut purée in the filling and then a simple chocolate-cream frosting. The ‘bark’ is just melted chocolate allowed to set and cut into strips to look as much like a log as possible.

1. Pre-heat the oven to 180°C (160°C fan). Grease, line and flour a 23x33cm swiss roll tin. Using electric beaters, whisk the eggs and sugar together in a large bowl until it has tripled in volume and is very pale. Sift over the flour and cocoa powder and very lightly fold into the egg mixture until incorporated. Pour into the prepared tin, smooth flat and bake for 10-12 minutes until risen and springy to the touch.

2. Lay a sheet of baking paper on a lightly dampened tea towel and sprinkle with the 2 tbsp caster sugar. Turn the cake over onto the paper and leave to go cold with the tin still in place.

3. Meanwhile, place the chestnut purée , icing sugar and brandy in a food processor and blend until smooth. Whip half the cream in a bowl until soft peaks form and then gradually beat in the chestnut purée mixture until thickened. Chill until required.

4. Place the remaining cream and half the chocolate in a small saucepan and heat very gently, stirring, until the chocolate is melted and smooth. Transfer to a bowl, cool and chill for an hour. Remove from the refrigerator and beat until thick.

5. Meanwhile, melt the remaining chocolate in a bowl set over a pan of gently simmering water, do not let the bowl touch the water. Stir until the chocolate is melted and pour onto a marble or clean wooden board. Spread thinly and leave to set.

6. Remove the cake tin and carefully peel away the paper. Spread the cake with chestnut filling leaving a 2cm border. Roll the sponge up from one narrow end to form a roll. Transfer to a cake board, seam down. Spread the chocolate icing over the top and sides.

7. Cut or crumble the set chocolate into long pieces and press over the cake to resemble a log. Dust with icing sugar and serve in slices.