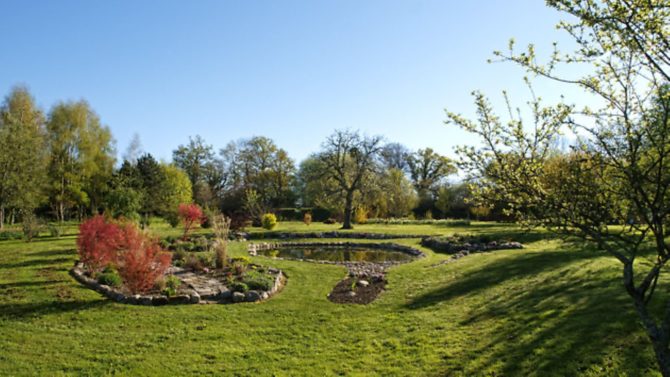 While the French love their gardens, until last year there was no Open Garden scheme in France. Michael Moat describes how he had the idea to run the first Jardins Ouverts

Many British people will be aware of the National Gardens Scheme, an initiative which has operated in the UK since 1927 and aims to encourage owners to open their gardens to the public, the entrance fees for which are given to charity.

The concept is intended to be enjoyable for all concerned, in that it enables people with an interesting garden to share this with other people, while simultaneously benefiting charitable concerns.

Despite the love and care that the French lavish upon their gardens, it became apparent to me a while ago that this idea had not been replicated in France. Following an initial discussion in early 2013 with the English Library Gardening Group in La Souterraine,

we decided to run a trial, based loosely round the NGS model, to determine whether there was sufficient support for the development of such a project.

It was virtually impossible to predict whether this would be welcomed as a positive innovation or cold-shouldered as an unwanted intrusion. In the event, four British enthusiasts, all within the Creuse department, volunteered their gardens and their time and it was agreed to open for one day on Sunday 30 June.

The entrance fee was set at €5 per adult, with children to be allowed in free, and this permitted access to all four gardens. It was decided that the profits would go to the French charity A chacun son Everest, an organisation which runs activities and projects for children who have cancer or leukaemia.

The decision of whether or not to provide refreshments was left up to each owner, but if provided, they were to be free. Consideration had to be given to health and safety, of course, and although each garden owner would have the responsibility of determining any potential hazards and take necessary remedial action, reciprocal visits took place to ensure that nothing had been missed.

Volunteers were recruited for a number of duties including parking, taking entrance fees, helping with refreshments and general overseeing of the garden areas. This freed up the owners’ time to spend with their guests, answering questions and giving advice.

Beforehand, we decided that were it to attract 25-30 people, we would consider it a success. In the event, over 50 people visited one or more gardens and, in the process, raised over €300 for the charity. The four owners found the experience to be most enjoyable on a personal basis, but more importantly reported that comments from viewers had, without exception, been very positive and a welcome addition to the social calendar.

The steering group was greatly encouraged by the feedback from the event and, shortly afterwards, met to determine the way forward. Without hesitation, it was agreed that the concept had been hugely successful from a number of aspects:

a. It had attracted French people into the four gardens

b. It had inspired enthusiasm from garden owners and garden viewers alike

c. It had raised a considerable amount of money for a worthwhile French charity

d. It had provided a springboard to further development, should the group so decide

It was quickly apparent that the group was not only committed to repeating the exercise, but was keen to see it expand. This would have certain implications for the group, which they embraced happily, with the most important being an amicable split from the English Library to set up a separate association.

It was also essential that the number of gardens be increased and that the borders would have to be pushed beyond the department of Creuse. Furthermore, a more professional approach would have to be adopted in terms of advertising, websites, management and general oversight. Consequently, in January 2014, Open Gardens/Jardins Ouverts successfully applied to become an association and the bank account and insurance were put in place.

The group set itself a target of attracting 12 gardens for 2014 and already 23 garden owners have committed their support for this year, with a further six already pledging to be involved for 2015. These gardens are situated in Creuse, Haute-Vienne and Vienne and new gardens are still being added on a regular basis. Every garden is visited by a member of the association to ensure quality and safety standards are maintained.

In terms of advertising, 5,000 colour leaflets have been purchased and Credit Agricole is sponsoring the printing of over 2,000 posters and flyers. The financial target has also increased to €1,000, which will continue to be donated to A chacun son Everest.

In 2013, all of the gardens were British owned but, as the project expands, more and more French owners are signing up. Encouragingly, the balance is now 40% French to 60% British and this will inevitably change still further with each successive year.

The logistics of organising Franco/British events are obvious; everything must be undertaken in French and English including publicity, questionnaires, visits to gardens and meetings. At first glance, this may be perceived as a daunting prospect and it is certainly true that it has additional complications but it does have huge advantages.

The association organised a meeting at the local mairie with all of the participants to discuss the protocols of the forthcoming Open Weekend, and it was agreed that it should be conducted in both languages. This was hugely popular with everyone and cemented what is an already established esprit de corps.

The long-term plan for Jardins Ouverts is that it should become a nationwide project. The group has been very encouraged by the response of the French owners, who have stated that it is the charitable aspect that particularly appeals to them and this has been the persuasive factor that has convinced them to become involved.

Moreover, not much more than a year has passed since the first decision was made to undertake this initiative and the association has come a long way in a short time. There is no reason to think that the project should not meet with similar positive reactions as it is rolled out across an increasingly wide geographical area.

The association has already turned its attention to the question of how this could happen. It is, of course, inconceivable that the existing committee can maintain a hands-on approach as the project becomes successively geographically distant, and our small group cannot and indeed wouldn’t want to continue to govern and oversee it in the same way that we are doing at present.

The National Garden Scheme in the UK provides a model on how the project may be rolled out. It operates on a system of county or local organisers and has a lot to recommend it. An organiser’s role would operate along similar lines to the way the existing group started, although for very practical reasons, a considerable degree of autonomy will be extended to them.

a. Gather together a small group of like-minded enthusiasts.

b. In the first year, concentrate on attracting a small number of gardens in order to establish the concept.

c. Roll out the scheme in successive years within a pre-set area.

d. Keep in contact with garden owners in their own areas

The functions of the central organising body (i.e. the association) would be:

a. To define the organiser’s geographical area

b. To manage and support the organiser

c. To oversee the quality of the scheme in each different area

e. To organise all insurance, publicity, funding and other administration costs

The local groups which are constituted by the organisers will thus be a local representation of the existing association. This arrangement will make it simple for organisers as they will have a ready-made framework.

Furthermore, organisers will not have to deal with funding, administration or publicity. Their task, pure and simple, will be to attract garden owners, carry out the garden visit for purposes of quality control and adherence to safety standards, and then pass the information on to the association.

Currently, all gardens are open on the same weekend, meaning that for two days a year, people have a huge range of gardens to view, and a paucity of gardens for the rest of the year. Furthermore, not all gardens are at their best in the final weekend of June.

Under the current arrangement, visitors will not get the opportunity to see spring flowers and bulbs, autumn colours and early flowering plants and shrubs such as rhododendrons, azaleas, magnolias etc.

The Association is now actively considering a system whereby garden owners stipulate the day(s) during the year when they wish to open their garden, on the basis that they will know at what times their garden looks its best or when to view certain principal attractions. This also means that visitors can, if they so wish, arrange their viewings on a number of occasions throughout the year, rather than hurrying round a whole host of gardens on just one weekend per year.

The major advantages of this approach is that it gives the garden owners the flexibility to do as much or as little as they wish in terms of opening their gardens, while offering hugely increased opportunities for visitors to see a larger number of them.

This means that the advertising will have to be ready by early 2015 and may need to be in the form of a booklet, describing each garden and the relevant opening days. Tickets could be bought at any time during the year and would allow access throughout that year.

The members of the Conseil are extremely enthusiastic and positive about the potential of the project, and are committed to developing a valued and successful contribution to Anglo/French culture and donating larger and larger sums of money to charitable concerns. There is no reason to think that it cannot go from strength to strength in the future.