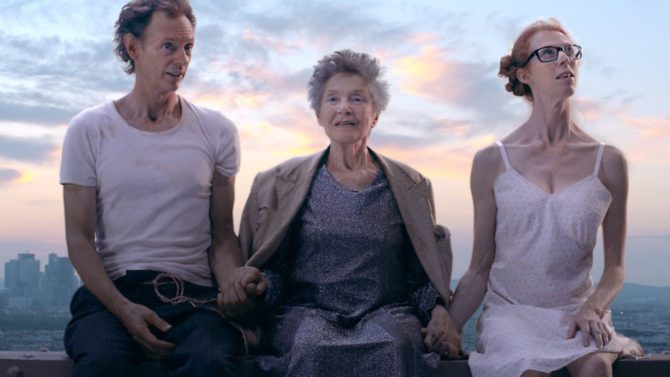 No one can ever accuse Fiona Gordon of not suffering for her art. The actress and film-maker, who is one of the world’s most gifted physical comedians, throws herself into her work with such gusto, she often leaves the set at the end of the day nursing bruises.

“When you play a klutzy character, you do get banged up a bit,” laughs Gordon. “One time, I twisted my knee so badly it swelled up to three times the size. It’s always a case of: ‘Oh, oh – are we going to be able to finish the film?’ But things always work out OK.”

Her new whimsical comedy Lost in Paris – about Canadian librarian Fiona looking for her missing aunt in the City of Light – sees the actress at her bumbling best: falling into the River Seine, hanging on to a ladder on the Eiffel Tower and getting stuck in a métro gate. The film is the latest collaboration between Gordon and her husband Dominique Abel, who started performing together in burlesque stage shows before transferring their slapstick skills to the big screen.

“We feel like we come from the same family as Jacques Tati and Buster Keaton,” says the actress, who also co-directs and co-writes films with Abel. “We know our style of comedy is not as fashionable as dark humour these days, but it’s what comes naturally to us.”

The world has Paris to thank for Abel and Gordon. The couple met in the 1980s while studying at the École Jacques Lecoq, which focuses on physical theatre and mime. Gordon arrived in Paris from Canada, where she moved after being born in Australia, and Abel hails from Brussels.

“Paris wasn’t at all how I imagined it,” Gordon recalls. “I thought it would all be like the Marais district, with cobbled streets, but I was surprised how modern it was. I was innocent back then and experienced some hairy adventures. But when you are 22, being lost in Paris is different than when you are 50. People get less adventurous as they get older.”

While Gordon and Abel did not see much of each other at the École, they started collaborating when neither felt like going home after their studies. The couple eventually relocated to Brussels and started their own company, Courage Mon Amour, doing stage shows before moving into short films and then feature-length movies.

After joining forces with actor-director Bruno Romy on L’Iceberg (2005), Rumba (2008) and The Fairy (2011), Abel and Gordon decided that, for their next film, it was time to be a duo again. It seemed like the perfect opportunity to return to the city where it all began.

“We chose Paris because it’s where we met and it’s back to being just the two of us,” Gordon says. “For a long time we avoided Paris as a backdrop for a film because we thought: ‘Where would we shoot, everything is so busy.’ So we did some location hunting and started rehearsing in the quiet spots we found. Some discoveries, such as the Île aux Cygnes [a man-made island in the River Seine], were very important. When we saw the replica of the Statue of Liberty there, we thought it would be a good place for the character of Dom [a homeless man, played by Abel, who falls for Fiona] to put his tent. Everything just built up around that.”

How many of these famous French women have your heard of?

For Fiona’s hilariously broken French, Gordon turned to her own mother. “She learnt French at high school but never spoke it,” the actress explains. “We just got her to say a few things and have a conversation in French and I kind of mimicked her.”

Listening to Gordon talking about the creative process makes you wonder what it is like for the actress to work so closely with her husband. Surely there must be friction at times? “We fight a lot, but over the years we’ve found a way to get around it,” Gordon says. “We write separately and then send each other our individual versions of a story. The other person would say: ‘What is this? You’ve cut out my favourite part.’ And then, after thinking about it, we’ll say: ‘It’s not too bad.’ We try to avoid arguing over it because it doesn’t get you anywhere.”

Next up for the dynamic duo is either a musical comedy or a crime film – they haven’t decided yet. “We are getting stuck when it comes to the complexities of crime,” Gordon says. “We like a simple story. But we are working on something and we’ll see what happens.”

As for the next location, they are happy to travel anywhere. “If we had an idea and thought that, say, London suited us, then we would make a film there,” Gordon explains. “Someone suggested we do a film in China, but we know nothing about the country. We tend to work on things that we know.”

Whatever they decide, Gordon will have to stock up on more bandages. “Oh, I love the physical comedy in our films,” she says with a chuckle. “Those scenes are always so much fun to shoot.”