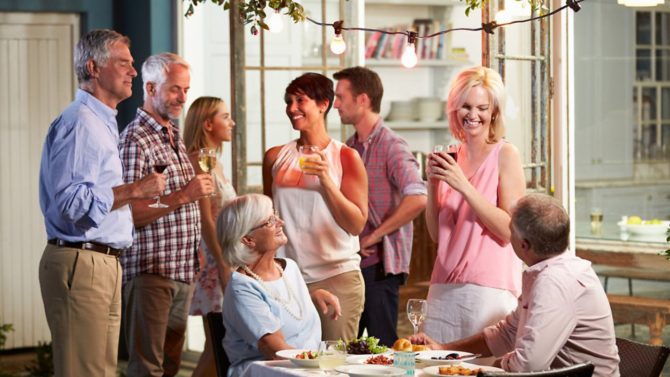 In French towns and villages your neighbours will be an invaluable help to you in a number of ways, so it is worth making friends with them

They will probably know a lot about your new property

However helpful your estate agent has been, there will come a time when you are on your own in your French home and need a helping hand. If you’re lucky, once the agent has showed you where the water turns on, where the electricity comes from and has handed you the keys, everything should work out.

However, as you’ll know, that’s not always the case. Water spurts from unexpected places, the lights flicker and there’s a terrible smell when you flush the loo. You’ve no idea where to take your rubbish, what to recycle or whether you can light a bonfire. Turning to the internet to find a tradesman or a solution to a problem may work in London, but in rural France your new neighbours will probably be your best source of information and support. Think of it as social networking offline.

The mysteries of non-mains drainage can also often be solved with a little help from your neighbours. The plan in the bundle of diagnostic reports you should have received at the notaire’s might be short on detail. Certain things might have bypassed the reporting system, such as the washing machine outlet in the annexe or the WC by the pool. They will most likely drain into non-standard outlets, which is fine when they work. Getting them up to standard could cost an arm and a leg, which is why it’s never been done. The neighbours will probably know. Ask around, and someone will also know a man who can make them work (but you might have to keep quiet next time the inspector calls).

Find a tradesman in France

They will be invaluable if anything goes wrong

Everything went wrong the first weekend for our newest neighbours. Bravely arriving with sleeping bags to camp out for half-term, their first problem was no water. The vendors had cancelled the contract when granny moved out many years earlier, thus the water was off at the company stopcock in the road. The road has since been resurfaced in typical rural slapdash fashion and all trace of the stopcock lost. The water board technician couldn’t find it. Cue a posse of neighbours trying to remember where they had last seen it!

Once the water was on, the poor chap found leaks galore as all the pipework had suffered in the icy winter of 2012, but at least he had well water he could pull up in buckets to flush the toilet. Neighbours rallied around with offers of showers and washing machines. Leaks fixed, he then found he had no water reaching the wc cistern. An elderly gentleman who happened to be passing knew why: old Monsieur D was mean, he said, and had a pump to draw well water to flush the toilet. When the pump died of old age, his widow used to have her home help draw the water in buckets which she kept on the landing for the loo! Nowadays we’d say he was using green technology and grey water, but not according to this old chap.

They will know all the local tradesmen

Don’t waste your time looking at English language forums; locals will know chimney sweeps, beekeepers who collect bee swarms, a man with a tipper truck to deliver gravel, log suppliers or the cheapest firm to empty (vidanger) your fosse septique. As in the UK, be wary of anyone who knocks on your door offering to clear the moss off your roof, paint your shutters or put a special coating on your terrace. They may be genuine tradesmen looking for work but there are a lot of shysters around. Always ask around about them before spending money.

They will keep an eye out for you

There are few organised neighbourhood watch schemes in rural France as most places don’t see the need to formalise what already happens: people watching out for each other. Not just keeping an eye on the old folk, but noticing suspicious activities and odd vehicles touring around. Lads who pretend to have run out of fuel for their mopeds, knock on doors and ask for petrol, and if that doesn’t work, a glass of water. A quick sneak and a wallet or iPhone is gone.

And your property when you’re away

Tell your neighbours if you’re going away. If they then see a white van and someone carrying out your TV they’ll know to call the police! Always make sure at least one of your neighbours has your phone number, or that of a local friend they can call if they see anything untoward.

Smiling and saying “bonjour” to passersby may not come naturally if you’ve been living in a city centre or in a commuter belt where everyone is at work all day, but getting into the habit is a good idea, and will be much appreciated. Even if you stumble with the language, a cheerful smile can work wonders and open a door into the local network of useful people with drain rods, long ladders and the know-how on EDF problems. English-speaking neighbours who are also competent in French can be a bonus if your French isn’t too good yet.

Your new French neighbours may seem nosy, but they’re probably just trying to sort out who you are and why you’re here, especially after Brexit. As our Renault garage owner said to me in Intermarché on Macron-versus-Le Pen election day, “the English are still coming, I don’t understand why but it’s good for the area”. You don’t need to give your life history; a few words about where you come from, what you do for a living or how old your children are will do for starters.

11 things to do before you move to France

Are foreigners in or out of favour with the French?