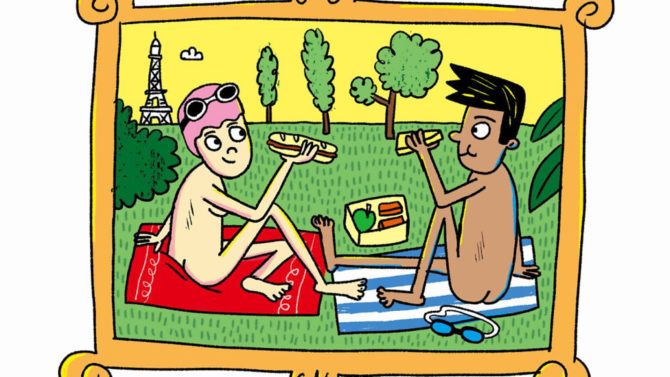 One of France’s best-known Impressionist paintings – and there are a lot of them – is Edouard Manet’s Déjeuner sur l’herbe, in which a couple of nattily dressed artist types are sitting on a lawn with an inexplicably naked woman. Neither of the men seem interested in the lady (they’re probably arguing about art), so she is turning her attention to us, the spectators. Maybe she’s hoping someone will give her a bathrobe.

Anyway, when I was a student at Oxford this painting caused an argument about how to translate the title. The French translation class split into three factions. The literalists said it had to be “Lunch, or Luncheon, on the Grass”; the poets insisted on interpreting it as “Picnic on the Lawn” and the realists (of whom I was one) said why translate at all? It’s famous by its French name. No one calls a well-known wine “The Pope’s New Castle”, do they? I can’t remember who won that argument, if anyone, but the image came to mind recently when I was having a picnic, on some grass as it happens.

Just like translation at Oxford, lunchtime picnicking in Paris seems to divide people into three schools. Some go to the boulangerie and get a “formule” (usually a sandwich or quiche, plus a non-alcoholic drink and a cake); some prefer a restaurant or fast-food place (but can that be called a picnic, or is it just eating your takeaway meal before you get home?); while others, like me, bring their own food – I’m a veggie and a lot of Parisian boulangeries still seem to think that tuna comes from a plant.

I’m lucky – I live near a huge park, La Villette, that allows people on the grass, though of course you have to be careful where you sit in case dog-owners have been there before you. And I was enjoying a déjeuner sur l’herbe near the canal recently when conversation turned to Manet’s painting. Had the two men been eating when a nude woman suddenly sat beside them uninvited? Or was she a fellow picnicker who got so bored with their conversation that she took her clothes off to see if they’d notice?

We couldn’t decide, so we went on to discuss a French actress who had revealed all at a movie awards ceremony, on prime-time TV. She was protesting about the government’s neglect of the arts during Covid (although in fact France is paying its actors a full year’s unemployment money). Politics aside, this nude protest felt highly Parisian. Back in 1863, Manet wanted to shake up the art establishment, so he plonked a naked lady in the middle of a picnic by the Seine. Almost 160 years later, an actress did the same thing at an awards ceremony. Plus ça change …

Anyway, back at the La Villette picnic, my friend revealed that Manet’s painting was originally called Le Bain (“The Bath”, or “Bathing”) – there’s a second woman in the background, rinsing herself in the river. At that time, Paris’s swimming pools were shut, so we wondered whether any naked canal bathers might come and demand to share our sandwiches. (This was the kind of thing your brain did during lockdown.)

Stephen Clarke writes a bi-monthly column for FRANCE Magazine. His latest novel is The Spy Who Inspired Me, a spoof thriller set in Occupied France.

Ian Moore on the sights and sounds of the French countryside

Carol Drinkwater: discover a new eco-museum below the waters of the Côte d’Azur

Previous Article What’s the cheapest way to pass on a French property to our children while we’re still alive?
Next Article James Bond: How France shaped 007’s adventures