Stephen Clarke: Why I can’t celebrate Christmas like the French do 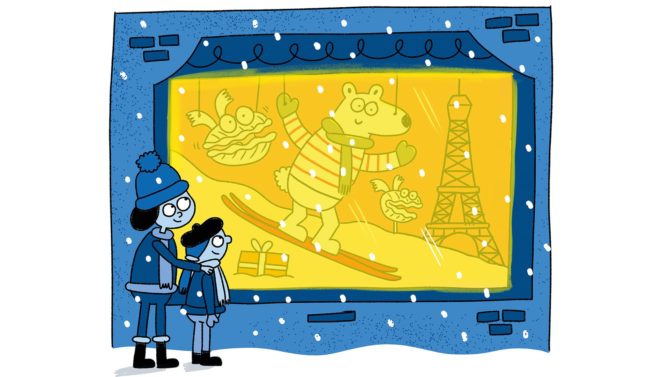 I don’t know about you, dear reader, but I’m one of those people who are either very superstitious or just plain patient, because I never open birthday presents before my birthday. And this habit of mine is why I’m out of step with a large proportion of Parisians in December: I can’t celebrate Christmas like the French do, on Christmas Eve. It’s not Christmas yet, so why celebrate? You don’t start saying ‘Happy New Year’ before midnight on the 31st, do you?
Lots of French people I know have their big get-together on Christmas Eve. I have nothing against a Christmas Eve party, but I prefer to have my presents and the official Christmas dinner next day. I’ve always wondered how French parents sell the traditional Santa myth to their children – maybe they say, ’He knows we celebrate a day early so he visits France before everywhere else.’ (Thinking about it, Santa’s a generous type, so I’m sure he’s open to compromise.)

Why I won’t eat foie gras
Anyway, the timing of Christmas is not the only way I’m out of sync with other Parisians in December. For example, I will never eat foie gras. In December, shops start putting out displays of this pink-and-yellow meaty stuff which is unashamedly the product of force-feeding geese until they are morbidly obese. The clue is in the name, which literally translates as ‘fat liver’. (Yes, it sounds like a disease.) I’ve never understood why the French go so crazy for it at Christmas.

Why oysters are better
I’m much fonder of oysters, which a couple of weeks before Christmas start to appear in astonishing numbers in my local supermarket. Overnight, a huge stack of boxes of oysters will be built in the fish section, accompanied by a bouquet of vicious-looking oyster knives which look like truncated daggers, the sort of thing medieval soldiers used to insert through the visors of fallen knights. But here again, I’m out of step with my French friends. I’ve always thought that oysters are best eaten as soon as possible after they’ve said ‘adieu’ to the sea. In Paris this means when they’re freshly opened at a big brasserie, having maybe been shipped in from the coast overnight. But some of my friends are willing to buy oysters off a stack in the supermarket, store them in the fridge and then prise them open on Christmas Eve. To me, that’s asking for trouble, like cycling the wrong way along a Parisian bus lane.

Why I avoid window displays
Leaving the realm of food, another Parisian Christmas tradition I tend to avoid is the visit to the complex window displays in the department stores (les vitrines des grands magasins). Typically, these involve large clockwork marionettes that dance or fly or ski or whatever the vitriniste has designed this year. It’s touchingly old-school – one day they’ll be replaced by 4D digital displays – and the main stores near Opéra attract massive crowds of parents and goggle-eyed children. But personally, I was put off these displays years ago when one of my kids declared, ‘But we can see all the strings that make them move!’. And I was forced to concede that the French are so proud of their engineering skills that they seem to prefer to show off the marionettes’ workings rather than maintaining any sense of Christmas magic.

Why I’m not an English Scrooge
All of which makes me sound like a veritable English Scrooge. Luckily, I’m able to redeem myself by inviting French friends to a Christmas celebration on Christmas Day (they think this is a brilliantly unconventional habit) and by serving plenty of a fat-free French Christmas delicacy – champagne – as well as something imported from Provence – calissons. These are small, soft, surfboard-shaped biscuits made of melon, orange zest and almonds, topped with a layer of icing. They’re so succulent that if nobody stops me, I will gobble a heap of them as high as the stack of oyster boxes in my supermarket. In fact, I’m such a fan that I’ll even start eating them before Christmas Day.

Stephen Clarke writes a bi-monthly column for FRANCE Magazine. His latest novel is The Spy Who Inspired Me, a spoof thriller set in Occupied France.