Escape to the Château: Dick and Angel launch exclusive new project The Salon 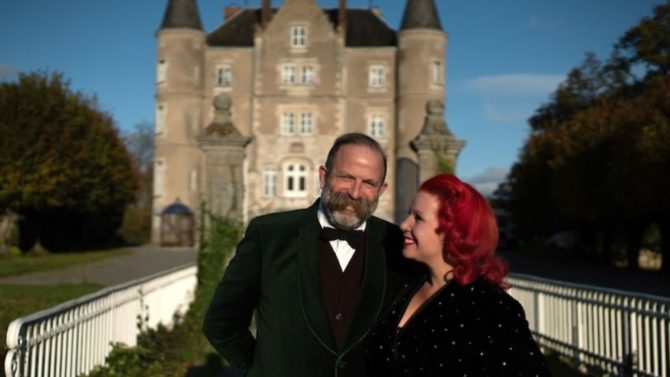 Members can enjoy virtual cook-alongs, craft-alongs and evenings with the couple, as well as the chance to win a wedding or stay at the château in France

Stars of the hit Channel 4 series Escape to the Château, Dick and Angel Strawbridge are opening their fairytale home in France to fans with a new subscription-based platform called The Salon.

The Salon will offer new château content, competition prizes, exclusive gifts throughout the year, the chance to ask questions to Dick and Angel and monthly virtual ‘evenings with’ the couple.

New members receive a welcome letter and voucher to spend in the château’s online shop which sells everything from personalised books to homeware, a mounted watercolour château print signed by the couple, a seasonal menu card to get ready for a virtual cook-along, plus details of what’s coming up. Those who join will also receive a quarterly gift, the first is a personalised stationery set.

Every month, guests can spend a virtual evening with Dick and Angel where they will share behind-the-scenes secrets to life at the 19th-century Château de la Motte-Husson, usually over a G&T. There will be cook-alongs and craft-alongs with all content going into a library to catch up on when you can. For anyone with a crafty conundrum or DIY dilemma, you can also ‘Ask the Strawbridges’ for their advice via email.

In addition, every month there is an opportunity to enter a prize draw to win a trip to the château for a Fun & Festivities day or a glamping stay at The Château Under The Stars floating dome.

There is also the chance to win a dream celebration at the château, which is located in Mayenne in the Pays de la Loire region, with all your family and friends – whether a wedding or birthday bash – to the value of £25,000.

“Over the years we have received thousands of emails from people wanting to know more about the château or asking for advice on their latest project,” say the Strawbridges.

“The Salon is our way of answering this and opening our home to anyone who wants to see behind the scenes or even visit us by entering our monthly competitions.”

Escape to the Château: Dick and Angel inspire families to make do and mend

French property: The reality of owning a château in France

Escape to the Château: Angel opens up about her first year at the château

Previous Article Long-stay visas, budget locations and lagoons: Things we learned in the May 2021 issue of French Property News (plus Living France)
Next Article Win a copy of Frameables: My Louvre