First published: 24 May 2016 by Stephanie Sheldrake 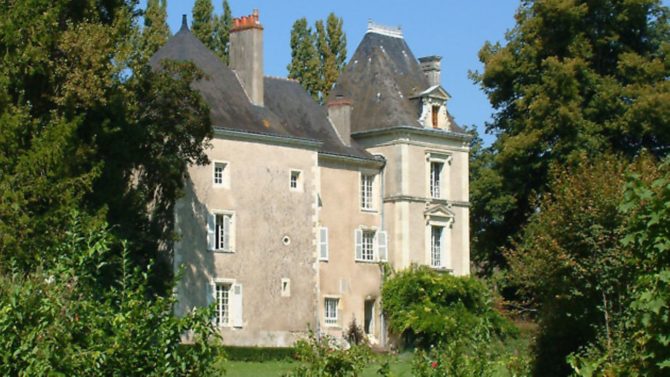 Fancy living in a Loire Valley château with live opera in your garden? That is exactly what life is like for this British couple and it sounds great!

How did you end up buying a house in the Loire Valley?

Buying a house wasn’t on the agenda when Bernadette and John Grimmett sheltered from the rain in an estate agent’s office while on holiday in France with their four children, but that is exactly what happened. “It was the only shop open where we could all shelter from the rain, and we came out having bought a house!” laughs Bernadette. The couple had been living in London where John worked as a freelance consultant and Bernadette was a GP, but they had become disenchanted with their busy city lives and were ready for a change.

The house that the couple bought was a small farm with woodland attached, situated close to Baugé-en-Anjou in the Loire Valley. They moved into the house in 1989 and immediately loved having outdoor space, a contrast to their former London home with its small garden. “The house had been fully renovated by the owner of the local quincaillerie (hardware store) we bought it from, so no work was needed,” says Bernadette. The couple soon fell in love with the area. “It has a wonderful golden light, every kind of wine you could imagine, with many traces of English history and we soon made friends,” Bernadette says.

Why did you then decide to buy a Loire Valley château?

When a beautiful local château – Les Capucins – came on the market, the couple decided that it was perfect for them and bought it in 1997. “It was a totally different proposition: damp problems, miles of inadequate guttering, leaky roofs and four acres of poorly maintained garden,” says Bernadette, adding that the property has a long history. “The crypt dates from the 11th century and part of the house from 1580. We have the names of all the abbots of the original monastery and the owners from when it was sold after the Revolution. From the Edwardian period on, we have photographs, letters and architects’ plans.” The property has extensive grounds, with gardens laid out in three terraces with parterres, lawns and woodland, a fountain, stream and even a moat.

Why did you decided to start an opera festival in the Loire Valley?

In 2002 John and Bernadette founded an annual opera festival in the grounds of their Loire Valley château, hosting opera performances on warm summer evenings. The inspiration for starting an opera festival has its roots in a wet evening at the Glyndebourne Opera Festival, in East Sussex. “I asked myself why someone didn’t take this event to somewhere with better weather and longer, warmer evenings. This seed of an idea took years to germinate but, eventually, we said to some musical friends of ours, ‘Why don’t you come and stay with us and let’s make an opera?’” And so, the Opéra de Baugé was born. Performances are held in a mobile theatre, the only one of its kind in the world. “It was created by a band of travelling actors and has even been to Russia. It is constructed from three long trailers and has stalls, side stalls and galleries. It has a fabulous acoustic because so much of it is made of suspended wood,” says Bernadette.

How did the first opera festival go?

The first festival took place in the summer of 2003 with a performance of Benjamin Britten’s Albert Herring. “It was a great success and people pressed us to continue. The next year was our pearl wedding so we wanted to give The Pearl Fishers. I also wanted to put on Martha as it was one of my favourites. That landed us with two heavy 19th-century works with full orchestra and chorus. Hubris, some said. Our music director wrote to the conservatoires in London asking for students to sing in the chorus. That’s when we hit the jackpot; Gareth Malone, Ben Johnson, Sophie Bevan and others, now brilliantly successful, came, enjoyed themselves, came again and brought their friends so, in short order, we had become a hothouse of rising talent with a growing reputation to live up to,” she says. “We are delighted when someone who made a debut with us goes on to sing at international houses like Covent Garden, the Metropolitan, La Scala and Sydney.”

How has the opera festival developed?

Since the festival started 13 years ago, the Opéra de Baugé has presented operas every year in late-July and early-August, drawing crowds of more than 3,000 each year. The season has grown to 12 performances and three operas, as well as two concerts. Having staged 39 operas to date, Bernadette and John have helped to establish the careers of many young singers, orchestra players and technicians. “The artistic side has gone from strength to strength but the financial side is an enormous strain,” says Bernadette, adding, “We accept it gladly and work full-time for no remuneration. There is no profit; only a loss, which we have to fund ourselves.” The Opera de Baugé was founded as a French not-for-profit entity. The Association has 180 members and 50 volunteers, putting Bernadette and John at the very heart of their community. “Our friends and supporters are infinitely generous and supportive and good company.”

What are your plans for the future?

“Our hopes for the future are to stay in business and get better and better at what we do. This year, we launch an Opera de Baugé choral course where members of British choirs can come and have a gastronomic holiday in the Loire, sing choruses from well-known operas and give a concert in a historic building. If there is any profit from this activity it will be ploughed back into the opera.”

Why do you love living in the Loire Valley?

Despite all the hard work, the couple have no regrets. “The biggest highlights are always the tumultuous applause after a terrific production and the anticipatory smiles on the faces of the patrons arriving at 4pm to drink champagne and set up their picnic tables before the 6pm start. They have seven or eight hours of sheer pleasure ahead of them and it shows on their faces.”

5 intriguing businesses set up by expats