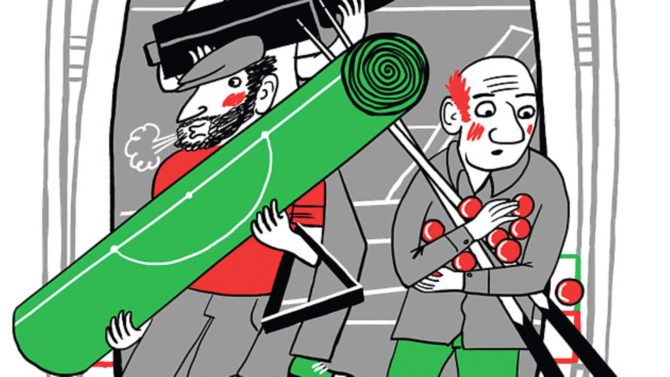 There are many reasons to consider a move to France: work, family, financial or a hankering for being on the doorstep of goat’s cheese production; but, and I say this often, for our family it was the closest place to London we could actually afford to buy a house.

And when I say ‘buy a house’, I mean a HOUSE. Taking full advantage of property price anomalies, we filled our boots like kiddies in a sweet shop and bought a place far, far too big for us with vague, not very serious, notions of ‘a gîte business’.

We’ve managed to mostly fill the place too, firstly with children and assorted ‘rescued’ animals, and then with the kind of brocante tat that will ‘be worth something one day.’ The final space was filled this week by, drum roll please, a full-size snooker table, or as my wife has taken to calling it, the ‘MLCP*’ (*Mid-Life Crisis Purchase).

Sourcing a snooker table in France isn’t that straightforward. They don’t really ‘do’ snooker, for one; it’s just billiards. I didn’t want to pay for a new one; I’m not a professional player (yet); and I didn’t want to pay shipping costs from the UK either, so I searched the French arm of that well-known auction website. Now, the site has taken the rest of the world by storm, but, like customer service and privatised utilities, it seems to have passed France by. It’s there alright, but like a boulangerie five minutes before closing, there’s very little on the shelves and what’s there is there for a reason – nobody wants it.

Also, I get the impression that the French don’t like to haggle, and certainly not over second-hand goods, so while the rest of the world sits anxiously hovering over the ‘increase bid’ button, France is on the terrasse having a glass of wine, having bought whatever they want from a listing website instead. They don’t bid, you see. There’s a price and you either pay it or not: shrug of the shoulders, shake of the hand and walk away.

I paid. And mightily pleased with the price, I hired a van locally and set off on the two-hour drive to collect the thing. Now, I knew it would weigh a lot but I really hadn’t banked on quite how much: the five slate panels each taking four of us to lift and carry just the few metres to the van. They alone took over an hour to shift before I then spent the two-hour drive home wondering not only how I would get them out again, but also anywhere near where they needed to be.

I rang my wife en-route, she made the calls and by the time I arrived, the cavalry was already waiting: two neighbours and two friends of neighbours, all ready and willing to turn up at the drop of a hat and help out. What hadn’t been explained to them, however, was the difference in size between a French billiard table and a full-size MLCP. One scratched his head: “How did you get them in?” he asked incredulously.

“There were four of us,” I replied. “Three Englishmen and a farmer from Corrèze.”

Something in him was piqued at this and he lifted his chin defiantly. “Without you, we are three Frenchmen and a Berrichon farmer,” he said, as they got to work, literally pushing me to one side.

“How long did it take you to load?” one asked, his forehead vein about to burst with effort, “We can beat it!”

Industrial action is a fact of life in France and I’m largely all for it; poor pay and conditions? Down tools I say; as a writer I do often. But it’s also true that governments have had a problem getting recalcitrant unions to put in the required effort from time to time… well, I might just have found the solution!