How did these expats turn their hobby into a business? 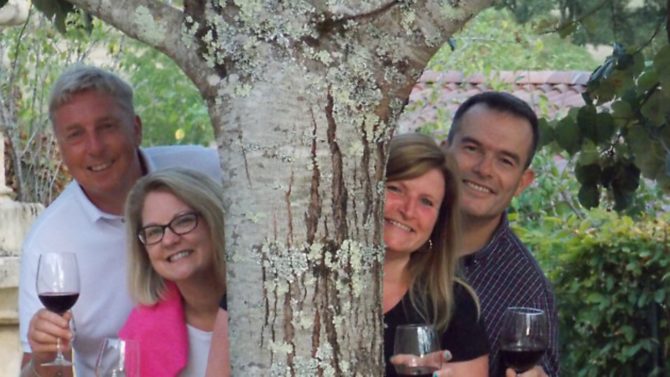 What is Duck & Truffle?

Duck & Truffle is run by four friends living in Dordogne – Kate, Emma, Max and Simon. They run wine tours and gourmet weekends in Dordogne during the quieter winter months

How did you come up with the idea of Duck & Truffle?

Just over a year ago, after a long working week, husband and wife Simon Batt and Kate Jones were enjoying a catch up with their friends, Emma Mayes and Max Pesce over good food and wine at one of the local restaurants in Dordogne. The gourmet get-togethers had become a feature of the couples’ routines since they moved to the region, but on this particular night as the wine flowed and the food kept coming, talk turned to the possibility of the foursome running gourmet tours, taking in foodie finds like the one they had discovered that night, in the area that they had come to call home.

“We just love Dordogne,” says Kate. “For us, it’s all about the wine, food and history and we just thought it would be great to share the place we live and love with others,” she says of the group’s reasoning to undertake such a project.

How did the idea develop?

With Italian sommelier Max on board, trips to the region’s myriad vineyards and wine-tasting sessions were an obvious starting point to the itinerary but as the quartet bounced ideas back and fourth, all sorts of activities including yoga were on the table to start with before they concluded it was best to keep things simple. “We were over-complicating things,” says Kate. “In the end we just decided to get people out here to enjoy what we enjoy, which is basically eating and drinking.” The same back-to-basics approach came into play when it came to thinking up a name for the business. “We do what it says on the tin,” Kate says of the brand name.

Noticing that visitor numbers dropped during the winter, it was decided that the gourmet tours would take place in the off-peak season, giving a boost to businesses when they most needed it. “The trouble with Dordogne is that it’s a very seasonal part of France. In the summer you can’t move and in the winter everything shuts and it dies down a little bit,” Kate explains.

How did local businesses react to the idea?

The set timeframe of late September to mid-May was an element that was particularly welcomed by the area’s restaurants and hotels for whom every little bit of publicity helps in the quieter months. “They thought the idea was fantastic because business drops off for them slightly in the winter,” Kate explains. “They have customers of course, but they will still have empty hotel rooms. We told them we were very happy to promote them and so we linked up.”

Businesses that they partnered up with included Michelin-starred restaurants as well as boutique B&Bs and more rustic, romantic accommodation and low-key places to eat and drink; an eclectic mix that Kate hopes will appeal to a wide range of people. “I think it’s important to offer people different things – not everyone wants to stay somewhere really posh,” she says. “Some people like something a bit more homely, somewhere to bed down. It’s up to us to try and find alternatives.”

Not only has Duck & Truffle paired up with everyone and anyone in Dordogne’s hospitality sector, it has now started to branch out to other areas of French life, including hosting weekends that are based on books by local author Martin Walker whose fiction novels are set in the Périgord area of Dordogne. “We just try to keep everything local,” Kate says of their networking approach. “It’s our passion.”

“We try to involve the restaurants and everybody around us so it’s not just about us four. It’s trying to get everyone working together out here,” Kate explains.

Beautiful B&Bs set up by expats in France

What is everyone’s role in the business?

Italian-born Max is a qualified sommelier with more than 25 years experience in Relais & Châteaux and Michelin-starred restaurants. He runs the wine tours and Simon escorts the guests around the various venues and is a support to Max, while Emma takes care of the marketing and Kate deals with the financial side.

They all bring their different skills to the business, each playing a key role in its success. But although each has their own responsibilities, they all very much work as a team, as Kate explains. “We probably don’t have defined roles as such because we’re all so involved with everything. We all sort of muck in,” she says. “It’s a pretty well-balanced relationship that we have. It is really, really lovely.”

It was undoubtedly a meeting of minds when the two couples met in France. For Italian-born Max, food and drink had always been a huge part of his life, especially as his parents owned a vineyard, and, raised on the Isle of Wight, Kate says her love of food stemmed from the farm-fresh produce and home-cooked meals that her mother had made for her as a child. But it was only after meeting Max and Emma that Kate began to appreciate wine. “I only know what I know about wine because of Max. Before I met him, I just used to like drinking it; I didn’t think much about where it was from. But suddenly when you learn about it, it’s really interesting,” she says.

Their working partnership is quite a contrast to other offices where colleagues often have to tolerate different personalities for the sake of the working relationship. In this work set-up, they all knew what to expect from each other.

“Emma and I are quite driven,” Kate explains. “I think our partners would probably call us high maintenance, but that’s not the word that I would use,” she laughs. It would seem that the similarities between Kate and Emma are matched by the likeness shared between the men of the group. “Max and Simon are very similar in that they’re horizontal. They’ve got passion and they love doing what they do but they’re definitely the calmer side – they keep us on track a little bit. I think the four of us have a really good balance. Because we get on so well, we’re not afraid to say things and that’s really important.”

Thankfully, the group are still indulging in what led them to set up Duck & Truffle in the first place and always find the time to discover new places to eat and drink. But, unlike their get-togethers before, their culinary outings now have a greater purpose. “When we’re not working we go out socialising together, visiting vineyards and restaurants to try out different things so we can then promote those to the people we want to bring into Dordogne,” Kate says.

Meet the stars of the TV show Escape to the Château

How do the tours work?

Largely led by Max, guests can avail of guided walks through some of Dordogne’s most beautiful vineyards or have Max visit them at their own accommodation for a personal wine-tasting session. It is a very accommodating concept that reflects the group’s unfussy approach to food and drink.

“It’s not always about the most expensive wine and the most expensive food,” says Kate. “It’s just about showing them the really good parts of Dordogne. For example, our truffles in the winter are just amazing and we take people to the same market where we go to buy them,” she explains. “It’s not about saying we’re going to take people here or there. This is what we actually do. It’s more about us saying ‘we love this and this is why we love where we live’.”

“We get all sorts of people coming on the weekends, from professional workers to young people who want a little taster, and retired people who love food and wine who don’t want to do something on their own,” Kate says. “It’s about getting like-minded people together and having a social event as well as learning about the area.”

In addition to the gourmet weekends, the group also run wine tours in the summer months, an added extra that only came about from customer inquiries. Kate says these were an afterthought to the weekend tours but that they are fully booked and they help promote the main winter activities well. “The people we’re meeting are saying they’d love to come back in the winter and do the gastro tours, so they’re a great bit of

Do any of you have any regrets about undertaking such a venture?

“I should have moved here 25 years ago,” sighs Kate before adding, “But I didn’t have the gumption. There’s such a different lifestyle here in that people really appreciate food and wine. I’m not saying that doesn’t happen in the UK, but…” she trails off, silently considering the difference the simple move across the Channel has made.

“Here in Dordogne, you could be sitting in your back garden and then 20 minutes later you’re at a château wine tasting.”