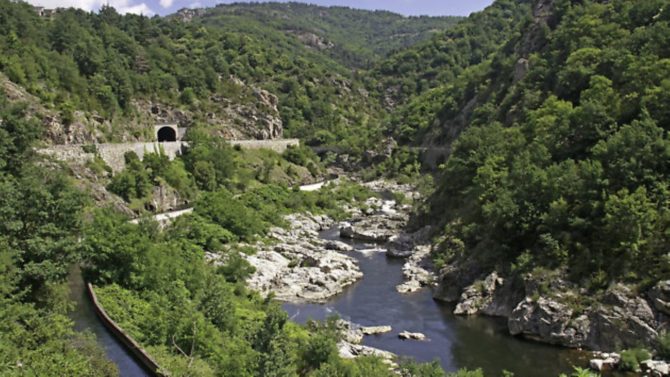 As autumn turns the foliage yellow and gold, farmers in Ardèche are gearing up for the chestnut harvest, an event that has influenced local life throughout the centuries.

For here in the far south-west of Rhône-Alpes, the humble chestnut tree – ‘the bread tree of the Cévennes’ – has been a lifeline for rural communities through good times and bad. Rich in vitamins, chestnuts are turned into flour, used in soups and stews, and made into jam and purée – staple foods for poor communities around the year.

Today Ardèche still yields 50% of French national production, with 60% of chestnuts sold fresh. The rest are transformed into cakes and biscuits, jams, jellies and marrons glacés: signature souvenirs from a department which ranks 76th on the list of France’s 96 departments by population. Half the population of Ardèche still live in rural communities, so if you like an unhurried, authentic lifestyle and spectacular unspoilt countryside, not to mention endless opportunities for outdoor leisure activities, Ardèche is for you.

The department lies on the left bank of the River Rhône, a natural border that stretches north-south for 135km. It is split horizontally into four distinct landscapes, all of them rural. Furthest north is ‘Green Ardèche’, a low-lying plateau bisected by valleys and home to the vineyards of Saint-Joseph, Cornas and Saint-Péray. The department’s largest town, Annonay, is located here, just west of the Rhône Valley and the busy Autoroute du Soleil, but Annonay is large only in comparison to other Ardèchois communities. Famous for its annual hot-air balloon festival in June, the town clocks in with barely 18,000 inhabitants.

Head south into the heartland or ‘plein coeur’ of the department, and Privas, the county town, has a population of just 9,000, with nearby Aubenas notching up just 3,000 more. And the population falls away still further to the west in the land of ‘sources et volcans’, an upland landscape of ancient volcanoes, crystal clear lakes, and pine forests. Finally there’s the ‘plein sud’, bisected by the River Ardèche, and gateway to Provence with a Mediterranean moorland – or ‘garrigue’– landscape and a sunny climate to match.

Once heavily dependent on agriculture and the production of silk to feed the clattering looms of the Rhône-Alpes capital Lyon, Ardèche is now geared firmly towards attracting visitors. Tourism is a major source of income, providing seasonal income from gîte rental and chambres d’hôtes, often in authentic, atmospheric properties with more than a passing nod to the Middle Ages.

This is an area where expressions like ‘responsible tourism’, ‘sustainability’, and ‘eco-friendly’ crop up regularly among a population passionate about preserving their natural heritage, from medieval villages to underground caves, wildly beautiful landscapes to rural traditions and recipes. You’ll even find an association that champions ‘menus curieux’, many of the ingredients culled from local hedgerows.

No less than 19 communities have been awarded the department’s Village de Caractère label, with Balazuc and Vogüé also ranking among the elite band of Plus Beaux Villages de France. These picturesque communities with their cobbled streets and ancient stones draw many tourists and property hunters to the area.

Ardèche is also a firm favourite with walkers and cyclists, thanks to a network of voie vertesand marked routes such as the 40km Dolce Via trail through the Eyrieux Valley, which follows the path of an abandoned railway line. The Via Rhona cycle route from Lake Geneva to the Mediterranean also passes through the department for around 90km along the river valley.

And if you like your sport with a tad more adrenalin, Ardèche delivers every time with a choice of rock climbing and kayaking, canyoning, mountain biking and wild swimming. Stay at one of the area’s many campsites or book into an atmospheric guest house. And if all that sounds a bit energetic, you can indulge in a spot of wine tourism on a guided vineyard walk or perhaps an electric bike tour.

But now a big new tourism initiative is set to pull in a different kind of tourist from around the world, as Ardèche celebrates the award of its first UNESCO World Heritage Site – the second in Rhône-Alpes after Lyon’s historic centre – in the form of the Decorated Cave of Pont d’Arc, previously known as the Grotte Chauvet. Located in the ‘plein sud’ of the department, this exciting development will give world focus to an area previously frequented largely by outdoor enthusiasts as well as country and nature lovers.

Prehistoric man left his mark on Ardèche in spectacular fashion, and in 1994, a decorated cave was discovered near Vallon Pont d’Arc by three amateur cavers led by Jean-Marie Chauvet. One can only begin to imagine how they must have felt when their flashlights illuminated limestone walls painted with 1,000 drawings dating back 36,000 years.

Among the images are 425 animal figures representing 14 different species, most of which would have presented serious danger to men armed only with primitive weapons. So important is the cave to the history of mankind that in June this year, UNESCO added it to its World Heritage list.

Only a few privileged experts will ever come face-to-face with its depitctions of cave bears and woolly rhinoceros, its hairy mammoths and big cats, but an ambitious replica cave – 10 times the size of Lascaux – will open in spring next year at Razal, a wooded area on the heights of Vallon Pont d’Arc. Here at the Pont d’Arc Cavern, visitors will be able to experience not just the paintings, but also the smells and humidity of the original cave, with an extensive discovery centre to provide the back story.

In the picturesque valley below, the River Ardèche winds sharply through deep gorges before flowing into the Rhône south of Bourg-Saint-Andéol. Visitors flock here in the summer months to travel by canoe or kayak beneath the natural stone bridge of the Pont d’Arc. Choose from a gentle 6km excursion – no previous experience necessary – as far as Chames, or spend a day or two on the 32km option, stopping over at a designated rural campsite. Be sure to follow the rules of the river though: I was amazed to get a cheery ‘Bonjour!’ from a pair of river policemen in their blue canoes, on the lookout for illegal campsites and fires.

But Ardèche isn’t the only waterway to make its mark on this rugged landscape. West of the buzzing market towns of Aubenas and Privas lies the Regional Natural Park of the Monts de l’Ardèche. Stretching from Saint-Agrève in the north to Les Vans in the south, it’s a haven for anyone who

loves the great outdoors, and although the landscape can look rocky and dry, water has a major impact.

The highest point is Mont Mézenc, nearly 1800m above sea level and offering a rooftop panorama over a rumpled eiderdown of rolling, rounded peaks. Look out for the signs that indicate the watershed line – rain falling on one side flows towards the Atlantic Ocean, and on the other to the Mediterranean Sea.

The big tourist attraction round here – and be warned, it is touristy – is the source of the River Loire. Here several streams join together on the slopes of Mont Gerbier de Jonc, supposedly in a trough in a cowshed close by a souvenir shop – an inauspicious start to France’s longest and most majestic river.

South of Gerbier de Jonc, the Cascade du Ray Pic is arguably more impressive and spectacular. Park beside the road and follow the path steeply down to the foot of the falls which tumble 200 feet over solidified basalt lava formations in a landscape reminiscent of Jurassic Park.

But it’s water that bubbles to the surface that boosted the prosperity of towns on the southern fringes of the volcanic landscape. Vals-les-Bains and Neyrac-les-Bains near Aubenas, are small but stylish spa towns, dotted with fine villas, while the nearby villages of Jaujac, Meyras and Thueyts also make charming stopovers.

The Ardèche flows westwards beneath the Devil’s Bridge at Thueyts and takes a sharp southerly turn around Aubenas. The river winds further on through a landscape dotted with a cluster of medieval villages such as Vogüé and Vinezac, Balazuc, Labeaume and Chassiers.

Nearby Largentière was founded in the 11th century and originally called Argentaria after the silver-bearing rocks which brought wealth to the town and the right to mint coins. Today this compact little town with its cobbled streets and turreted château holds the distinction of being the smallest sous-préfecturein France.

This is the heart of chestnut country, so for a real flavour of Ardèche, stop off at the Chestnut Grove Museum in Joyeuse, housed in a beautiful 17th-century building, to find out how this humble fruit impacted on rural life here on the fringes of the Cévennes.

And just for the record, ‘châtaigne’ is the general word for chestnut, while ‘marron’ refers to a large nut formed singly in a pod. A staggering 65 varieties of chestnut are grown in Ardèche, of which 19 are the most commonly used. Watch out for an inventive range of local produce that includes chestnut beer, biscuits and baguettes, and for a delicious drink, the delicate chestnut liqueur from Distillerie Jean Gauthier in Saint-Désirat is particularly tasty added to an Ardèche white wine as a kir-style apéritif.

East of Joyeuse, the Ardèche meanders in photogenic style past Pradons and Ruoms, before taking another change of direction, veering sharply south-east to Vallon-Pont d’Arc and those famous gorges. But the UNESCO cave isn’t the only underground superstar.

Beneath the hills on the south side of the gorges, the spectacular Aven d’Orgnac is a must-visit for anyone who likes subterranean geology. Nestled up against – or under – the border with the region of Languedoc-Roussillon, this fabulous cavern may not have cave paintings, but is blessed instead with stalagmites, stalactites and vast underground halls – one of a handful of natural attractions to carry the prestigious label Grand Site de France.

Walk down through the earth’s crust to a depth of 121 metres and through vast caverns studded with weird and wonderful formations. The tour finishes with a tasteful sound-and-light presentation before visitors are whisked back to the surface by lift. Don’t leave without dropping in at the newly refurbished Cité de la Préhistoire museum, which showcases man’s ancestors from Paleolithic times to the Iron Age, a fascinating complement to the forthcoming discovery centre at the Pont d’Arc Cave.

After the constant temperature of the underground caverns, ground level can be quite a contrast. On a hot summer’s day, the perfume of aromatic plants hangs heavy in the air and nowhere more so than around the Musée de la Lavande in nearby Saint-Remèze. Time your visit right and you can breathe in the scent of the south in the botanic garden, then take it home in a bottle or bar of soap – a tangible reminder of Ardèche’s powerful experiences.

Ardèche tourist board www.ardeche-guide.comWondering what it is like to live in Ardèche? Read about Ilse and Fons who run a B&BRead our interview with an Ardèche estate agentNot sold on Ardèche? How about the Lot Valley?