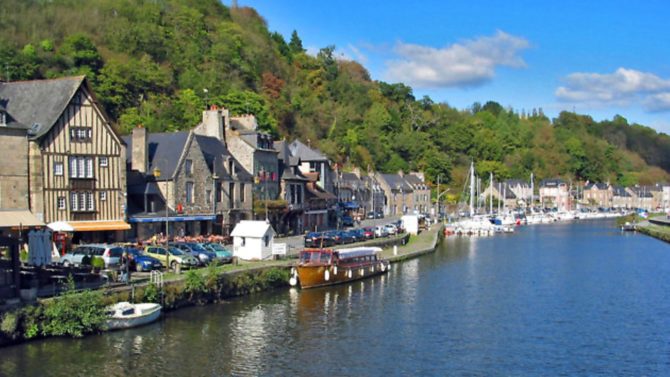 With its rugged coastline and tranquil countryside, Côtes-d’Armor in Brittany is a department of rich and colourful contrasts, as Patricia Stoughton discovers

Cradled by its rural borders with neighbouring departments Finistère, Morbihan and Ille-et-Vilaine, the extraordinary and varied coastline of Côtes-d’Armor is a dramatic contrast to its peaceful countryside. The department’s typically Breton towns and châteaux are brimming with history, and its many churches and chapels are a reminder of Brittany’s strong religious heritage.

Côtes-d’Armor, known up until 1990 as Côtes-du-Nord, shares much of its characteristics with Brittany as a whole – its mild Atlantic climate, its food, its varied landscape and Breton traditions – but it has its own feel too. The linguistic boundary between Breton and French is marked by a line from Saint-Brieuc, south east through Loudéac to Vannes. Breton was, until the early part of the 20th century, the dominant language to the west. To the east, it was French and it may be that because Breton speakers were intuitively more religious, there are many more churches and chapels on that side of the department.

There are a number of gîtes and businesses across the department that are owned by British expats, who make an effort to speak French or Breton, and join in with the local community. On arrival many find they are greeted in the old Breton way, with gifts of fruit and local produce left on their doorstep by their neighbours.

Language and hospitality aside, the shores of Côtes-d’Armor are one of its leading attractions – one of the most spectacular is the Côte de Granit Rose: 18 miles of fantastically shaped, ancient, weather-beaten, pink granite rocks running from Louannec in the east, along the shores of Perros-Guirec and Ploumanac’h, to Plestin-les-Grèves in the west. The most striking beach is at Ploumanac’h, where there are not only pretty views of the sea, the pink granite rocks and the romantic Château de Costaérès but also curiosities, such as Saint Guirec in his beach oratory, surrounded by water at high tide. One large rock, resembling the bicorn hat worn by Napoleon, is of particular interest to historians, for the words “Le Chapeau de Napoléon est-il toujours à Perros-Guirec?”, broadcast from London on 3 August 1944 that activated the Jedburgh teams that were leading the Breton Resistance. Their task was to block the German reinforcements coming from the east.

From the beach, you can follow the sentier des douaniers, the old customs patrol route, part of the GR34 grande randonnéewalk that encircles the whole of Brittany. Around the corner is the pink granite lighthouse from where there are views of the great, fantastical, roseate boulders constantly morphing in the changing light.

Driving along the coast from the east of the department, worthwhile excursions include the Points of Saint-Cast and de la Garde, with fine views of the Côte d’Emeraude; the cliff-lined scenery of Cap Fréhel; and Fort-la-Latte, an impregnable edifice built at the top of sheer cliffs and almost completely surrounded by sea. Thoughtfully restored, Fort-la-Latte, dating from the 14th century, makes a good family outing. Walk across its drawbridges spanning two deep crevasses, and you are transported into history to discover the role it played for centuries in repelling attacks, including one by the English in 1490.

To the north-west of Saint-Brieuc are the popular resorts of Saint-Quay-Portrieux and Paimpol and from there, the Point of Arcouest and the Île-de-Bréhat. Known as the ‘île aux fleurs’ for the diversity of its wild flowers, Bréhat is popular with artists. Reached by a 10-minute ferry ride, it also has the advantage of being car-free.

Not to be missed though is the romantic, ruined Abbaye de Beauport. Founded in 1202 and endowed with lands and privileges in Brittany and England, Beauport went through alternate waves of prosperity and decline. What remained of the monastic life ended with the French Revolution and the buildings served variously as a mairie, local school, farm, and apartments. By the end of the 20th century, its condition, with frequent flooding of the gardens and the progressive collapse of buildings, was cause for concern.

In 1992, Beauport was bought by the Conservatoire du Littoral, who have carried out sympathetic restoration, stabilised the ruins and given visitors a perception of the abbey’s historic past.

To the west, across the rivers Trieux and Jaudy is the attractive historic town of Tréguier, which owes its existence to Tugdual, a Welsh monk who was one of the seven founding saints of Brittany. Its beautiful Gothic cathedral bears his name. Tréguier is also a stopping place for the Tro Briez, a pilgrimage revived in 1994, dedicated to Brittany’s founding saints. Every year, pilgrims complete a stage of the route visiting the tomb of one of the many saints: Brieuc, Malo, Samson, Patern, Corentin, Pol Aurélien and Tugdual.

If you’re staying in the area, the Sillon de Talbert, a shingle bank formed by a combination of currents, stretching three kilometres out to sea is worth a look. Though the stones are hard on your feet, the views of the coast are impressive.

From there on to Perros-Guirec, Ploumanac’h, Trégastel, Trébeurden, the Côte de Granit Rose and beyond: the coast is dotted with small island bird reserves, sheltered coves and spectacular viewpoints. Take a map to help you discover some of these secret places; a good idea for the summer season, as this part of the coast is often very busy.

Here the landscape is mainly agricultural; as well as its rich cultural heritage, Côtes-d’Armor has a thoroughly modern economy depending on agriculture, food processing, fishing and tourism. There is also a strong telecommunications sector based in Lannion, and the department is the most important in France for pork production, eggs and potatoes, in addition to a thriving fishing industry that centres on oysters, mussels and coquilles Saint-Jacques(scallops). As all across the tables of Brittany, crêpes are popular, and cider from Merdrignac makes an excellent accompaniment.

Life is relaxed here and property is cheaper, so a number of British people have settled in the area. Gareth and Lin Lewis, who founded the Central Brittany Journalin 2004 and live near Callac, cite the “spectacular coastline” and the “relatively unspoilt countryside” as favourites, adding: “the similar climate and geography to south-west England mean it’s quite easy to feel at home. It’s still possible to find stone cottages in idyllic locations at a very reasonable price”.

Further to the north-west of the department, Keith and Angela Bradford, professional translators who live near Plouzélambre, have become very much a part of their community by sharing their culture. For 16 years, they have brought Shakespeare to Trégor with productions in French, using local sites as scenery. The plays have been a great way to integrate: “When we first arrived, we thought we spoke French,” explains Keith, “but real fluency came over several years”. Angela adds: “Local people were curious about what we were doing, so we would be invited for coffee and so on”. For them, life in Côtes-d’Armor means a chance to enjoy the quiet beauty of their surroundings: “It’s not a rat-race here, and the population density is a fraction of that in Britain,” says Keith.

The landscape of Côtes-d’Armor boasts protected natural sites such as the forested gorges of Corong and Toul Goulic, or Daoulas with its razor-edged rocky outcrops.

There are lakes, rivers and streams hidden in forest land, and towpaths along a section of the Canal de Nantes à Brest. The Lac de Guerlédan, which you can explore by canoe, is magical, as is the site of La Vallée des Saints, paradoxically set on a prominent hill, close to the Finistère border at Carnoët. The plan is to create a thousand granite sculptures, each at least 3.5 metres high, over the next hundred years representing all the saints of Brittany, whether recognized by Rome or not. This year will see the 51st statue put into place, and already the site has the mysterious beauty of a contemporary Easter Island.

The department is administered from its modern capital Saint-Brieuc, which with its picturesque cathedral at its heart, can be busy during the summer season, as with the town of Lannion to the west. Plancoët is known for its bottled water; Lamballe, home to the national stud farm for traditional Breton workhorses, is also worth visiting to see the Musée Mathurin Méheut, with the artist’s evocative representations of Breton life both on land and at sea, and his portraits of soldiers in the First World War. Guingamp is a thriving, typically Breton town, well-known for its football team, winners this year of La Coupe de France.

From the N164, running by several small towns to the south of the department, you can slip away to explore the less well-known countryside.

Of all the towns in the department, arguably the most interesting and impressive is medieval Dinan, the quintessence of a fortified Breton town with its cobbled streets and tightly packed buildings, many of them half-timbered. Its ramparts are still in place, and looking out across the River Rance, you get a feeling of how daunting it must have seemed to attackers. The town celebrates its medieval past with the annual Fête des Remparts in July.

Dinan’s position was well-protected and over centuries, Brittany’s strategic importance has left Côtes-d’Armor bristling with castles, some in a maintained ruined state, others expertly restored. As well as Fort-la-Latte, the châteaux at Costaérès, Quintin, Rosanbo, Tonquédec, Coat-an-Noz, Roche-Jagu, Bienassis, with its rose garden, and the ruins of Hunaudaye are among those offering a wide variety of architecture and history.

Reminders of Brittany’s religious heritage can be found all over the department dating from the menhirs of the Neolithic age, through paganism to the present day. Many of the ancient standing stones revered by pagans were made Christian by the addition of a cross on top. Likewise, chapels and churches were superimposed on ancient pagan sites, characterized by woodland and a spring, and their traditional healing powers transferred to a Christian saint.

Many of the smaller chapels are hidden off the beaten track but still lovingly cared for. Some are locked out of season, but others are more accessible. One such, among seven remaining in Brittany, is the carillon wheel at Saint-Nicolas-du-Pélem, dating from the 17th century. With 12 small bells attached to its wooden rim, it is sounded during mass, at weddings and baptisms, while the chapel at Vieux-Marché brings Christians and Muslims together through a pilgrimage at the end of July.

Whether lazing on beaches, sailing, exploring, or enjoying fêtes and festivals, the wealth of diversity in Côtes d’Armor is testament to its characterful identity.

Interested in buying a house in Côtes-d’Armor? We asked a local estate agent about the property market

Previous Article Estate agent interview: Côtes-d’Armor
Next Article WIN! a copy of Nothing Like a Dream