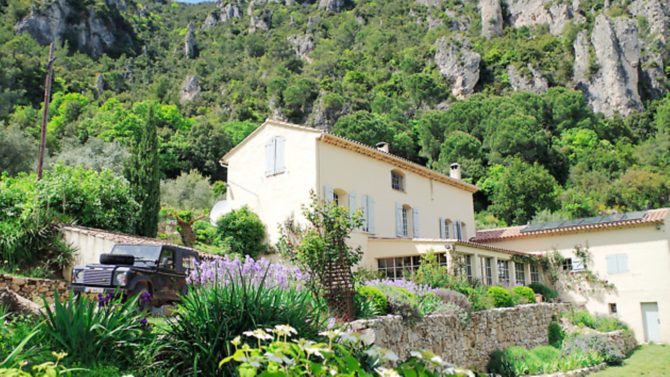 An olive farm in Var in Provence captured the hearts of British couple Gerry and Mark Whitcombe-Power, and they transformed the rundown farm into a gîte business and now produce their own AOC olive oil. Find out how they did it

When Gerry Whitcombe-Power and her husband, Mark, first set eyes on Les Escavalins, the farm in the Var department had lain derelict for nearly 50 years; destroyed by a terrible frost which wreaked havoc across the area on Valentine’s Day in 1956.

The freezing temperatures that night killed 80% of the orchards and olive groves in the department, forcing many farmers to abandon their land for good. Today, however, the former fruit farm on the edge of the village of Belgentier, is a thriving olive farm and gîte rental, thanks to Gerry and Mark’s vision, determination and hard work.

The couple began their search for a property in France after Gerry’s mother, who was French and lived in London, died in January 2004. “It was a real wake up call,” says Gerry, who gave up her job as a Montessori teacher to look after her mum in the last year of her life. “We were living in London at the time, and we knew we wanted to move to France, but it was really mum who was the galvanising force to make us go ahead and do it.”

Gerry knew the area well, having spent numerous summers near Cannes as a child: “Mum’s dad was in the SNCF all his life and retired to Cannes, so every summer holiday when I was little, I was shipped out to grandad’s to practise French, and so the Var is an area I’ve always known.”

The rugged landscape, outdoor lifestyle and chance to get back to nature were also important factors. “Both Mark and I are very sporty,” says Gerry. “We like climbing. We like riding bikes. We like the outdoors and we like forests, hills and mountainous countryside. Var has all of that.”

Their search took in an area from Haut-Var-et-Verdon down towards the Mediterranean coast and proved fruitless until they came across an advert for Les Escavalins in the French property magazine De Particulier à Particulier.

“We came to have a look and as we were winding our way up the rough dirt track towards the property, we stopped and got out of the car to take in the view over the green hills to the sea and the cliffs behind the house. We were struck by the intensity of the smell of warm pine, lavender and thyme,” recalls Gerry, with fondness. “That was it. We fell in love with it.

“Logistically, the location is perfect. Nice, Marseille, and the Côte d’Azur are just 25kms away, but in Belgentier you can ignore it all when it gets too busy. There are markets all round, and the Haut-Var not far away with its truffle markets; all that authentic Provençal life that people love.”

They moved out to France in July 2004 and have spent the intervening 11 years breathing new life into Les Escavalins, which covers nearly 100 acres and is one of four ancient farmhouses in Belgentier that date back to the Middle Ages.

“It has been a heck of a project,” says Gerry. “What it said in the advert and what it actually turned out to be were two different things entirely. It was a very dilapidated farmhouse and what had once been a cherry farm, but it was totally overgrown. There were cherries, and apricots, old olives and figs, all derelict; overcome by the forest which was right up to the house, so we couldn’t see any of that when we first got here.”

Many of the ancient terrace walls, known in French as restanques, had collapsed or had been damaged by the droves of wild pigs that roam freely in the surrounding forest. These walls have all now been restored and rebuilt along with the house itself and a little cabin within the property grounds.

“The house is in a cirque with the restanques leading up to the cliffs behind,” says Gerry. “It’s really stunning. It’s a little corner of paradise. It really is.”

As soon as the house was habitable and the old orchards had been cleared, Gerry and Mark began planting the new olive groves. “According to the local chamber of agriculture, some of the oldest olive trees here were planted over 1,000 years ago,” says Gerry. “We’ve managed to keep a few of them around the house because it’s important for heritage and it looks nice to have a few of these big old trees; but on the actual fields, we were advised to take out the few old, damaged trees which remained and plant from scratch.”

With the help of a mini-digger and assistance from friends and family, they now have 2,000 olive trees planted across 17 acres.“As soon as you come into the main gate, you can see the little olives trees, and they are little at the moment,” says Gerry. “They are our babies! We planted them in 2007, and they are just coming true now.”

They produced their first batch of AOC Huile d’Olive de Provence, Vierge Extra in 2010, and are now in the process of achieving organic status, a frustrating three-year slog, and something of a formality as chemicals have never been used at Les Escavalins in its long history.

“We have always used organic techniques, such as spraying fine kaolin clay powder on the olives rather than insecticides to stop fruit fly damage,” says Gerry. “This place has never had chemicals used on it, and that’s our philosophy too. It’s why we’re here.”

The oil is selling well online and through a local market. “The local butcher also sells it, and people can buy it direct from me,” says Gerry. “Some local restaurants are starting to ask for it which is very flattering, and we are always looking for bigger outlets.”

New for this year is the installation of their own olive mill. They have also cleared an area to plant saffron bulbs, established several beehives and are reintroducing truffles to an area of woodland behind the house. The olive mill will enable them to harvest in the morning and press the olives in the afternoon to ensure top quality and freshness.

“We’ll also be able to pick what’s ripe, variety by variety, so we really can work on having the highest quality oil,” says Gerry. “We’ll be able to produce fruité vert: fruity green, fresh olive oil; the fruité noir, which is the other extreme: quite chocolately, earthy almost mushroomy; and in the middle fruité mûr, which is less peppery. Up to now, we’ve taken our olives to a mill 45 minutes away and everything goes all together in one pressing, but now we will be able to be more selective. We will be able to pick what we want, when we want, and do small batches.”

The oil is also proving popular with their gîte guests, who come from all over the world to experience Gerry and Mark’s unique blend of luxury and escapism. “Our gîte has been carefully restored to retain its original features,” says Gerry. “We wanted to replicate what we would like to see if we came to stay: good shower, fresh, crisp bed linen, pure white towels; a touch of luxury without the fuss.

“But it’s not all posh and pompous; it’s not all frills. It’s a really natural environment. Our gîte guests say to us: ‘It’s amazing how many animals we’ve seen.’ And it really it is. They see all kinds of birds here: Bonelli’s eagles, Grand-duc owls, buzzards, hawks and nightingales; and wild boar, fallow deer and foxes are a treat to see at night. “It’s a complete disconnect; pure escapism; so different from most people’s everyday lives,” she recounts.

They have been warmly welcomed by their neighbours in Belgentier, a typical Provençal village with a population of 2,000 people in the Gapeau Valley. Their excellent French, along with their plans to regenerate the farm, immediately won them friends in the local community, and meant that everyone has taken a keen interest in what they’ve been doing.

“The village thought we were mad but they’ve been on-board right from the beginning,” says Gerry. “When we first got here, the house was such a wreck that every evening, we would go down to the village after work, just to get out of a building site. We met a lot of the locals and they took a keen interest in what we were doing and that continues to this day.”

In truth, it’s far more likely that it’s the heroic efforts this visionary pair have made to bring Les Escavalins back to life that have endeared them to their neighbours, and here’s hoping they enjoy health and happiness in their picturesque corner of France for many years to come.

Read about other expats living in France