Expat life: running a ski school in Les Gets 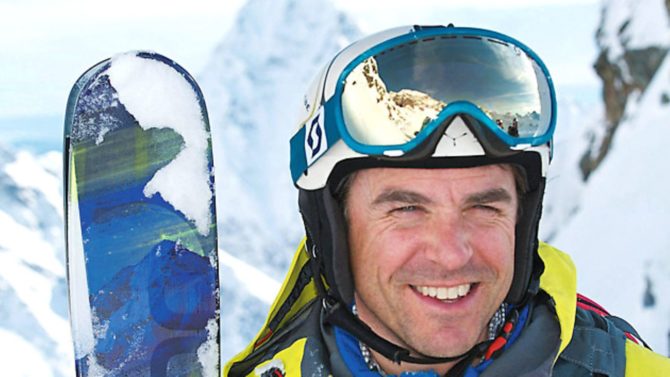 After one visit to Les Gets in the French Alps, expat Tim Scott decided to move to the resort and set up a ski school, as Ben Palfreyman discovers

f you ever visit the bustling village of Les Gets, in Haute-Savoie, you will understand why, for an ever-growing community of expats, it is very hard to leave. Along with its neighbour Morzine, the village – one of eight French locations among the total 12 that make up the Franco-Swiss Portes du Soleil resort – has seen British dreamers taking up residence in this idyllic spot over the last decade, many of whom thought they were merely coming here for a holiday.

For many, that first sighting of the majestic Mont Blanc massif surrounded by great swathes of white-capped peaks is enough to make their hearts melt, while for some it is the old French village feel, with its typical Savoyard architecture and local shops and markets, that stirs up thoughts of settling. For ski school owner Tim Scott, who first came to Les Gets by chance more than two decades ago, it was all about the snow.

“In the early ’90s, I enrolled on a ski instructor course, having learnt to ski in Scotland as a teenager, and came out to work for a small chalet business as well as doing a bit of ski school on the side.

“Initially, my plan was just to come out for the winter season, but almost immediately I realised that this area had something special. I came back to Les Gets in the summer to experience what it was like without the snow and realised it has so much more to offer.”

As well as his love for skiing and snowboarding, living in Scotland had naturally engendered a passion for mountain biking in Tim, and that first summer was largely spent exploring the Portes du Soleil by bike.

“Les Gets is fantastic for both mountain biking and road biking,” Tim says. It is no secret that the French Alps have numerous world-class cycling routes, and the use of the gondolas allows access to many miles of cycling opportunities. During the summer months, ski and snowboard outlets turn into bike hire shops, and, when the snow has melted, it is possible to traverse the trails all the way to Switzerland and back in a day. The only thing that doesn’t change, of course, is the après spirit, although possibly a glass of refreshing Rousette de Savoie (best served chilled) is more the order of the day than a warming tumbler of vin chaud.

From the village of Les Gets, mountain bikers can directly access no less than 90km of slopes, with 13 downhill trails and six giant cross-country circuits. A world-class biking destination in its own right, Les Gets has hosted the World Downhill Championships, and throughout the Portes du Soleil area you can access more miles of biking opportunities than you could ever hope to reach in a week.

“When I realised that I wanted to make Les Gets my home, I decided to get into road biking so I could get know the area really well. The superb day rides from Les Gets include classic Tour de France cols (mountain passes), such as the Col de la Colombière, which is widely regarded as one of the toughest climbs on the tour. If you want to take on a real challenge, though, you should try cycling round Lake Geneva in a day!”

The following year, 1992, Tim Scott moved to Les Gets with his partner Fiona, starting up a small holiday business called Alp Active, which organised mountain biking treks through the Portes du Soleil, before diversifying into a variety of family activity holidays.

After seven years, they merged their summer outfit with a winter chalet business in 1999, and then eventually stopped trading in 2004 so that Tim could focus all his attention on his ski school, called LGS Ski.

“I love seeing the progress people make during their time with us; being part of that journey is so rewarding,” Tim says. “As much as it is the physical progression with their skiing, it is also great to see their mental progression, as their confidence levels increase and they really start to enjoy it. Putting smiles on peoples’ faces is the best part of my job!”

Tim now employs three other British ski and snowboard instructors, all of whom live in the locality. “I ski 40 hours a week,” he says. “I teach six hours a day and take time out for my own skiing when I can. I have a few ski mates who live out here, and we do an annual boys’ trip in the low season in January. This year, for example, we did a half-day of heli-skiing, which is all off-piste skiing in locations accessed only by helicopter.”

At first glance, it might seem that life is just one big holiday for Tim, but this is far from the truth.

“Winters are completely full-on,” he says, “and when I am not out on the slopes teaching, I am in the office processing bookings and answering emails. I know everyone says it, but you have to be prepared for the bureaucracy in France, so that keeps us busy too, and with Fiona being a general manager for a holiday business, she is incredibly busy during peak seasons.

“We have no regrets though. For me, the extensive and varied skiing makes it all worth it and our proximity to Geneva means we are able to fly throughout Europe and enjoy even more snow sport opportunities. It is nice to be able to get quickly across to Italy for a complete change. Fiona enjoys skiing, but she also spends a lot of time on walks and partaking in her love of photography.“

During those down time moments, Tim says he has recently started to take an interest in gardening and has even taken on some garden maintenance jobs in the village. This doesn’t seem to equate to ‘time off’, but he does admit that he still manages to find some time for après-ski in the village too.

“When we go out, we tend to end up going to a local bar. My friend runs a place in town called Bar Bush where they sometimes have bands on. If I have time for lunch, one of my favourite places is a restaurant on Mont Caly called Les Chevrelles, which you have to either ski or walk to.

“For holidays, we have taken trips to the south of France, and in particular we like the Ardèche. When we first came out here, we always drove back to the UK so that we could see more of France, but I have to admit that we normally fly straight back now. We have travelled a fair bit but there is still a huge amount we would like to see.”

With a lifestyle built around action-packed adventure, it is not surprising to learn that Tim and Fiona didn’t take the easy route to buying their forever home in France either.

“We knew we wanted to put our roots down and buy somewhere, but we weren’t sure whether to buy a chalet or an apartment as chalets are a lot more expensive. After a while, an opportunity came up to buy somewhere off-plan in a location we’d always said we liked on the outskirts of the village. As it wasn’t so central, it meant that we could afford a chalet, and the market was in our favour as we bought at a good time.

“I love the chalet. I have a real empathy with wood, and I love the traditional chalet style, even though the exterior needs to be treated every six to eight years. The design is based on the classic madrier, which is a traditional decorative style of building with double tongue and grooves. They are, in fact, similar to old log cabins, although ours isn’t quite as rustic with horizontal timbers backed on top of each other held together with retaining beams. Because we bought off-plan, we were able to choose some of the fixtures and fittings, and now have a modern kitchen in a traditional style.

“Above the beauty of our home, though, is the unspoilt view we have across the valley. We look over forested areas of large pine trees, and the chalet faces south so it catches the sun. The only challenge is how we maintain our garden as it is on a steep slope!”

This landscape of traditional Savoyard chalets sitting within the stunning protected Alpine landscape is just the reason why so many people experience a coup de coeur when entering Les Gets. Plus, with guaranteed snow throughout the season due to no less than 385 snow cannons, as well as a host of events and activities to enjoy during the rest of the year, there really is very little reason to leave.

www.skischool.co.ukInspired to look for your own Alpine chalet? How about this chalet in Méribel