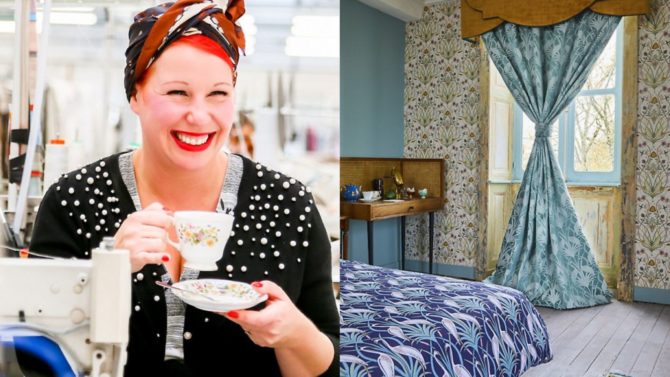 You can now furnish your own home à la Angel Strawbridge! The design queen has launched a soft furnishings and wallpaper collection based on her stunning handiwork in the hit TV show.

Whether you own a grand country pile in France or a modest flat in the UK, you can now buy curtains, cushions, bedding, furniture and wallpaper designed for Château de la Motte Husson, the fairytale family home in Mayenne that Angel and husband Dick moved into four years ago.

“This is such an exciting time,” says Angel. “It feels like every twist and turn in my career has brought me to this moment. Knowing how proud Dick and my family are continues to drive me, and keeps me smiling every step of the way.”

Angel’s quirky vintage style has won her legions of followers over five series of the show and its spin-off Escape to the Château DIY.

Those who tuned in from day one may remember the offcuts of old wallpaper she found while rooting around in the château attic. She cut diamonds from the designs and created a patchwork on the walls of a tower stairwell.

“For years now we have received messages from fans all around the world asking if they can come and see the Wallpaper Museum,” said Angel. “It was a story that really touched viewers of the show.” Fans can now buy bedding, cushions, lampshades, wallpaper and fabric featuring the design.

More recently Dick and Angel have turned the former servants’ quarters on the fourth floor into a beautiful “potagerie suite”, so-named because of its glorious view over the walled garden. Inspired by the view and the century-old wallpaper already in the room, Angel created a new paper and fabric, incorporating carrots, courgettes, artichokes, sweet pea and bees.

The Oriental Garden collection, meanwhile, takes inspiration from the bamboo plantation Dick and Angel found behind the château, planted in the 1870s by the original owners, the Baglione family. Viewers have probably guessed from Angel’s huge collection of kimonos that she has a passion for oriental design.

The Deco collection is a series of glamorous woven fabrics influenced by the Art Deco period, in a sophisticated palette of creams, blushes and teals.

Lastly, the The Heron Collection pays homage to the graceful birds that sit on the Strawbridges’ moat every morning to eat their fish, something that delights their children Dorothy and Arthur, says Angel.

“Dorothy has taken a real liking to our adopted heron, often shouting at the top of her voice ‘the heron..the heron!’ It often flies off at this point, but we all run to the window to see it in flight. In Japanese culture, the bird represents and noble and graceful appearance and a sign of purity.”

The Château By Angel Strawbridge is available in stores nationwide now, with prices starting from £21. For stockists, visit belfielddesignstudio.com/the-chateau-by-angel-strawbridge/