Escape to the Château: a fairy tale in the Loire 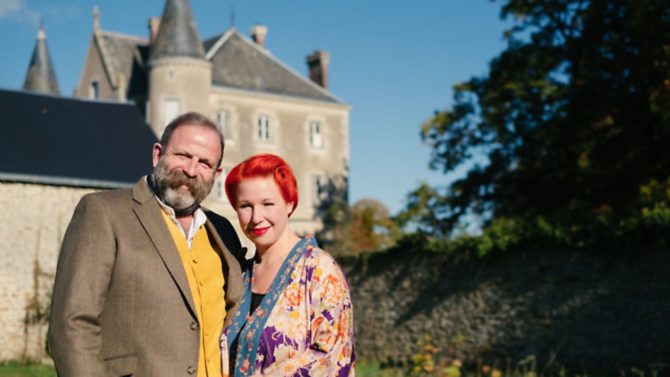 Escape to the Château is back on our screens. We caught up with the stars of the show, Dick and Angel to find out what they’ve been up to since we last saw them

What have you been up to since the first series of Escape to the Château?

Dick: Between our wedding and the start of filming in July, we’ve just been getting on with life and just doing things. Everything that has to be done here is continuing; we’re continuing our refurbishment, I continue to work and go away; Angela has been back and forth to the UK doing some jobs and things. We’re earning to put into the pot which is eaten by the château.

Do you ever have any regrets at taking on such a huge project?

D: Categorically, no. We smile every day. From spring to autumn we try and sit on the front stairs and have a drink together in the evening to try and stop, and take it all in and breathe. We are actually that happy.

Dick and Angel Strawbridge: We bought a château and it was a bargain

Angel: We have highs and lows, don’t we? When you’re self-employed and working in your home, you’re never off work, so it’s not like we can go home and turn off, it can be very encompassing. But as Dick says, you take a breath and look at what you’re doing, and you just have to make sure that you have those moments. Dick or I will remind each other of that, otherwise you could be just too busy all the time.

How do you find working with each other?

D: We are different people but we’re both very headstrong. There’s a lot of passion in what we do and consequentially, there’s a lot of energy and debate. That’s my way of saying we argue quite a lot.

How have your children, Arthur and Dorothy settled into life in France?

D: Well, they live in a château! They’ve got a little garage of tricycles and cars and they use the entrance hall for riding around. They’re happy as Larry. Arthur’s just started school. He’s the only English person in the primary school, and he’s learning French now. They’re going to be bilingual and they’re going to understand very different cultures which is great.

The château can now be hired as a wedding venue. What can a couple expect from having their big day at the château?

A: Well, it’s a beautiful backdrop. We’re kind of like a one-term solution. It’s quirky, it’s different. You’ve also got Dick; and you’ve got me doing all the styling and co-ordinating and making sure the wedding is perfect. People trust me; they know my past, they know my books and they know that I have got attention to detail, and that’s a lovely feeling. To do someone’s wedding… it is a privilege.

D: There’s never going to be two weddings that are the same. I told Angela we should definitely charge more. I would say we’re very, very reasonably priced, but it’s because we really believe in what we’re doing.

What are your plans for Christmas?

D: We’re having a double Christmas this year. My family from Ireland, my mum and sisters, are coming across so we’re going to have one of our turkeys next week and then my son James and my grandchildren are coming later in December so we’ll have another family Christmas then. So Père Noël is coming twice this year. This place is meant to have people smiling in it and that’s what we want.

What has the reaction been to the show?

D: The hashtag #escapetothechateau was trending when the show was aired on Sunday. It was phenomenal actually. We couldn’t believe it really, it was overwhelmingly gushing. We’re doing something that everyone talks and dreams about.

Where do you see yourselves in five years’ time?

D: We’ve got more of outside to do, we’ve got more suites left to get done, we’ve got work to do so that the business model evolves. We’ll be writing; we’ll be living. Basically, we’ll be here. I moved my stuff in with no intention of moving out of here. We plan to just enjoy life.

What’s your favourite thing about your new life in France?

D: We are living the dream if you like but actually, we are working towards living the dream. We haven’t yet managed to adopt the two-hour lunch mentality, or having more time to ourselves. The biggest thing for me is that we’re still dreaming, we’ve still got our dream ahead of us. But between the two of us, in not too long, we may actually have our dream come to reality.

Watch Escape to the Château on Channel 4 this Sunday, 4th December and next Sunday 11th December at 8pm

We bought a château and it was a bargain

Inspiration for your French vegetable garden

Running a hotel and wedding venue in Dordogne

Renovating a château in Lautrec