A New Life in the Sun: Road Trip visits vineyard and cookery school in France 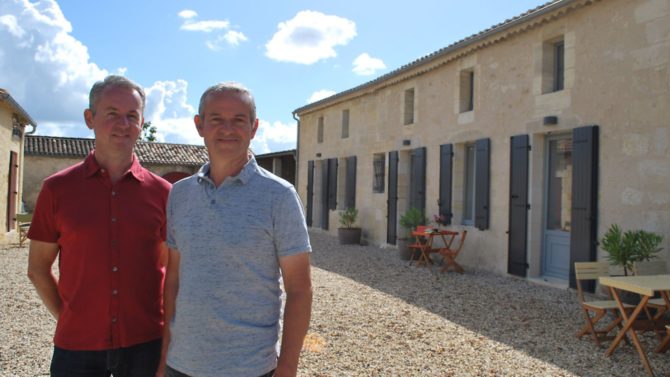 French maître d’ Fred Sirieix embarks on a journey around some of Europe’s most beautiful locations in A New Life in the Sun: Road Trip, meeting Brits who have set up new lives abroad.

In the Bordeaux and Côtes de Duras wine regions of France he hears the stories of winemakers and a sommelier and chef who have launched a gîte and cookery school.

They include Robert Brimfield and Stephen MacMahon at Clos Vieux Rochers in Puisseguin, near Saint-Émilion in Gironde, who sold their estate agent business in the UK to follow their dream.

“It’s the centre of the universe where wine’s concerned, because whatever your feelings are, France produces the best wines in the world,” Steve says on the Channel 4 show. “This is right at the heart of it all.”

Steve and Rob took over the 2.5-hectare vineyard in 2015 and also renovated four holiday gîtes.

“It’s very easy to go through life with a ‘what if’ or ‘I would love to’ or ‘I should have’ and you end up at a certain time of your life sometimes just regretting things,” Rob added.

“The only regret you will have, is that you didn’t do it sooner.”

The vineyard is not far from Sainte-Foy-le-Grande, home to a renowned street food market which was the perfect place to start selling their wine. Clos Vieux Rochers is also located near Castillon-la-Bataille which holds a large historical re-enactment every year offering wine tastings and entertainment before the main show. They also offer tastings at their local village wine festival in Puisseguin, as well as selling their wine online.

Over the past five years, Rob and Steve have doubled the size of their operation, planting another 2.5 hectares of vines.

“We probably knew more about wine than the average person would know, but zero about growing vines and making wine,” Steve admitted.

Rob adds: “If you are committed and you want to embrace local culture, the wine industry and be part of something that is truly unique and traditional, you have to embrace the whole experience.”

South of Sainte-Foy-la-Grande, sommelier John Gilchrist and his chef wife Emma moved to Duras, in Lot-et-Garonne, after selling their pub in Buckinghamshire. They bought an 18th-century French country house for €167,000 with an annexe gîte in need of restoration.

John said: “There is no way you could get that in the UK and so now we’re mortgage free.

“When we had our pub and house in the village, we knew it wasn’t going to be our final home and this feels like home.”

The couple had a business plan to run a gîte, cookery school and wine-tasting classes and undertook renovations for 12 months with the help of Emma’s mum and dad before opening in 2017. Once they’d welcomed their first guests at Les Caulins and honed their hosting skills, Emma began providing evening meals for guests with John combining his wife’s food with the best wines from the region.

“John knows an awful lot about wine because he was a sommelier in England for 30 years,” Emma explained.

In the locality are thousands of artisan food producers growing everything from fruit and vegetables to the world-famous Périgord goat’s cheese. At a goat farm nearby, holidaymakers can even go on a walk with a sherpherdess and her goats before sampling some of the delicious cheese.

The residential cookery school breaks at Les Caulins, in Saint-Sernin, start in late October and run through until June. The five-day courses involve hands-on lessons, preparing dishes and enjoying the food with local wines.

Starting a new life and business in France was an ambitious project for John and Emma which is now thriving.

Catch up with A New Life in the Sun: Road Trip at channel4.com

A New Life in the Sun: Launching a microbrewery in France

Previous Article Setting up a food business in France…and 10 other things we learnt in the April 2021 issue of French Property News (plus Living France), out now!
Next Article Stephen Clarke: How to re-learn the art of being Parisian