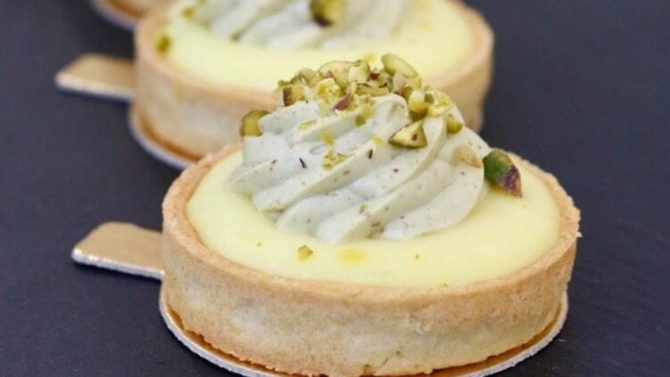 How long have you been creating plant-based French pâtisserie?

I started Cocolico Pâtisserie in February 2018, so nearly two years now. But I had been working as a pastry chef since I graduated in 2011 from catering school.

Had you always wanted to be a baker?

I have always been obsessed with food in general and come from a family of caterers. I have been trained as a pastry chef since my twenties and have worked at prestigious places in Paris including Hôtel de Crillon and I also worked as a pastry sous chef at Helmut Newcake, the city’s first gluten-free pâtisserie.

I love cooking, but baking is what I thrive at. I love that discipline – creativity is infinite.

When did you decide to start eating more plant-based food?

It is hard to say when I became vegan as my journey began five years ago, when I found out that I was lactose intolerant. The process took me a while, I didn’t switch immediately.

What is your favourite creation?

It is really hard to choose, but I would probably say my first creation: Mister Biscoff. It’s a tartelette with Biscoff pastry, rich dark chocolate ganache and Biscoff buttercream. I love it because it’s simple and very cute at the same time. It’s indulgent, but somehow not too sweet, the sweetness of the buttercream balances the bitterness of the chocolate ganache and that flavour of Biscoff is irresistible.

Which cakes are your best sellers?

My best sellers are without a doubt, the simplest ones: Mister Biscoff; The Flan: it’s a thick custard tart, baked with real vanilla; Miss Meringue: a lemon meringue tartelette and of course, the vegan French macarons, everyone loves them, especially little kids!

What brought you to England from Paris?

My partner was offered a job opportunity back in June 2016, we didn’t think much about it and we quit everything and moved in three weeks. We always had a taste for adventure and we also wanted to improve our English, and here we are, without looking back.

Is there anything you miss about working and living in France?

Although my greatest work experiences were in France, I don’t miss working there, because I actually started to work for myself in England, which is very rewarding. I don’t think I would have been able to do what I do so easily if I was still in Paris. I do miss my family and friends as you can imagine, but we are not on the other side of the world, so we get to spend quality time when we visit each other.

In Paris, definitely. It is very easy to be vegan in Paris, loads of places are opening and offer a variety of delicacies.

However, outside Paris, I would tend to believe that minds are not as open. French people have a strong attachment to their food and ‘terroir’, but I am sure that veganism is growing as everywhere else.

What are the challenges of creating plant-based pâtisserie?

The challenges are multiple. It has to look good and taste even better. Substituting dairy is the easiest part, but with eggs, it’s much trickier. I’m also trying to use less refined products: sugar and margarine for example give great results, but I would like my pâtisserie to be as natural as possible, using high quality ingredients and supporting other small businesses (vegan honey, vegan butter, Fairtrade vanilla, organic chocolate etc.)

Moreover, you need to convince everyone that the product is just as good, even better than the conventional one. I have found, at the beginning of my vegan adventure, that most people who realised that it’s vegan tended to be put off because they thought it couldn’t be good. But when they tried it, they were amazed by the taste and texture.

Mentalities change though and people are more aware now, partly because many people have food allergies or intolerances, and the demand is higher than ever.

Are there any French cakes which you haven’t tried to make yet?

I have been working on vegan choux pastry since forever and have managed to get a satisfying one, but I cannot make éclairs. The other speciality I used to adore is the cannelé (from Bordeaux). They both contain a large amount of egg, which makes them difficult to ‘veganise’.

Who is your typical customer?

My typical customer lives in Reading or the surrounding area and is usually a woman aged between 30 and 50, not necessarily vegan, but with a very sweet tooth.

What is your favourite thing to eat?

I literally love everything. For savoury dishes, I am very attached to Asian food, it is so hearty and healthy, from Indian curries to tofu dishes and noodle soups. It is for me the richest and tastiest food. It also connects me to my roots and makes me feel good.

As for sweets, I like anything that involves coconut! I probably could have coconut ice cream every day.

Is there a French or British pastry chef you aspire to?

I do idolise Cédric Grolet, who is probably the most famous French pastry chef in the world at the moment. Everything he does is just perfect. He is behind the pastry scenes of Le Meurice hotel in Paris and has very recently opened his own pastry boutique.

I did have the chance to enjoy tea at the hotel a few years ago and it was mind-blowing with beauty and accuracy of flavours.

Do you have any exciting plans for this year?

I am actually taking an eight-week training course at the moment about how to grow my business, but I have also planned to attend an intensive vegan pastry course in Barcelona with Toni Rodríguez in April, in order to perfect my craft.

I think it’s important to invest in people who inspire you so you can reinvent yourself.

How easy is it to be vegan in France?

Macarons are the most Instagrammed European food